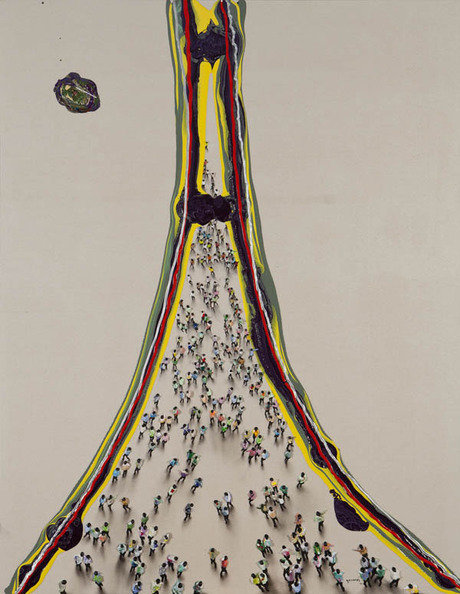 'Americana', the solo show by Doug Wada, will be comprised of oil paintings depicting his characteristic quotidian, mass-produced objects. Wada extracts elements from the everyday and presents hyper-real, full-scale painting interpretations. He selects banal objects such as coolers, barber poles, and turnstiles, and suspends them on a white background, providing the opportunity to contemplate the true meaning of these familiar and often ignored elements of our lives. While these paintings create a nearly trompe l'oeil effect at first glance, when examined closely the lustrous, velvety brushstrokes create a surprisingly sensuous surface. The exhibition of Juan Genoves comprised of approximately 20 recent acrylic paintings. He creates tension in a number of paintings by adding vertical or horizontal lines that serve to reinforce the picture plane and provide a textural contrast with the highly impastoed figures. The artist's forceful use of line and perspective, aligned with an exacting eye for the modulation and use of color, are as physically engaging as they are aesthetically compelling. At the beginning of his career, Genoves' body of work was devoted to the subject of political engagement. His artistic development occurred in the isolated world of Franco's Spain, where he was influenced by modern photography and cinema, and, like for Francis Bacon, the films of Sergei Eisenstein were a main source of influence. (Image: Juan Genoves, Angostura, 2011, acrylic on canvas on board 68 7/8 x 53 1/8 inches) Opening reception January 11 from 6-8pm.