The exhibition sets out to show the power that has been transferred from the big cinema screen to all types of digital screen. Categories: Counter Field, Gaming, Surveillance, Over-the-top Screen, Advertising, Sport, Political History, The Empire of the Stars. 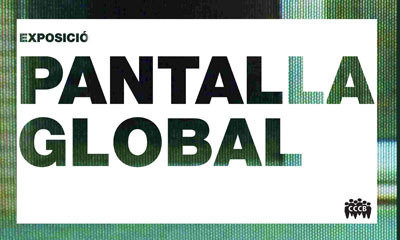 The aim of the exhibition is to show every aspect of the power of the screen: seduction, spectacle, creation of archetypes and models, information, communication, shock factor, interactivity, surveillance, etc. It is a power that technological advances serve to renew, increase and diffract from the initial format, the big cinema screen, to today’s proliferation. Screens that are present everywhere, at all times, screens that allow us to see and do everything: TV screens, video screens, touch screens, spy screens—interactive, recreational, informational... The screen has become a constituent element of hypermodern societies.

The exhibition also sets out to show how this power has gone from the big screen of the cinema to all kinds of digital screens, imposing its model: the cinema model or cinevision, a worldwide phenomenon, creating a world made up of screens and screens that create the world.

Independently of cinevision, the screen has also become the gateway to the world. It is not only aspects of everyday life that happen on screen; relations with the city, culture and knowledge are also conditioned by what screens contain and convey. The phenomenon is all the more powerful because it is globalized and instant: the screen not only creates another, illusory, spectacular world, it actually gives us access to it.

This exhibition will run at the Museu San Telmo (San Sebastian) from June to September 2012.

The basic idea is to create a single screen that is the canvas of the exhibition, an audiovisual strip running through the galleries from start to finish.

This continuous screen will show the various themes or sections of the exhibition, presented in the form of audiovisual works:

The Empire of the Stars

This opening section presents us with two pre-cinema screens, the Sistine Chapel and the planetarium, evoking the starry skies as a metaphor for the stars of the cinema. Starting with these faces, it continues to the stars of television, taking us to the ego-stars of YouTube and the new digital media.

The idea of this section is to understand how our imaginary is structured by the images of different historic events that have become archetypes of the modern world, and the way these images from television, cinema and the Internet have influenced the events themselves and our view of history.

This section shows how screens have served political discourse: first in the cinema, to impose an ideological dogma, particularly in totalitarian regimes; then on television, disseminating a model of political communication and borrowing advertising techniques, and now it is a question of selling a product...

Sport is one of the main components of the collective contemporary imaginary to have been modelled by screens. Sport now enjoys a truly cinematographic staging that has made it a globalized spectacle, as well as a metaphor for social life, providing a viewing model for the world.

Screens have also served the economy and the market, creating new archetypes, spreading an ideal of the good life and helping to form a consumer civilization. Advertising has been the number one form of expression of a century of mass production and consumption, and this section helps to explain its internal workings and its influence on other screens.

The screen, like everything in the age of hypermodernity, races inexorably on in its headlong course, pushing back boundaries in an exponential proliferation that is never enough. The image has become an over-the-top image that creates an ever stronger impact both in subject matter (sex, violence, speed, etc.) and form (multiple shots, pace of editing, soundtrack overkill, etc.).

One of the most spectacular phenomena of the new screens is also one that raises the biggest problems: the multiplicity of video surveillance systems, spy planes, location systems, GPS, Google maps, body scanners, etc. that pose a threat to public and private liberties. Today, people are constantly being photographed, filmed and watched, and not just for reasons of safety or politics, but also for commercial purposes…

This category of screens introduces a new perspective: fun, games and spectacle, creating alongside reality another world where pleasure is the guiding principle. This immersion into a fictional world that seems real lets the player split in two and live another parallel life.

In this case, the theme is presented not by an audiovisual but by an augmented reality installation, allowing visitors to experience the interaction (and confusion!) between physical reality and the new virtual reality to emerge with video game screens.

The Global Screen project has developed a participatory open screen mechanism—a social screen—that we call counter field. It comprises the visual contributions of anyone interested in collaborating in this process of joint reflection on the role of screens in the contemporary world. It is a space that is open to creativity and a view of the subject that provides a counterpoint (counter-counter field) to the discourse (the field) of the exhibition curators.

These short audiovisual pieces will be processed on the project’s website and will be available for consultation and viewing at the exhibition (each section will have its own counter field).

From 1 October 2011 to 30 September 2012 Other ideas
*
Global Screen: screening of the videos taking part in the exhibition

26 January 2012 Audiovisual works
*
The Traumatograph and Other Phantasmagoria

*
Screens have arrived and they are here to stay

19 of January 2012 - CCCBVEUS CCCB
*
The creation of the counterpoint

27 of December 2011 - Juan insuaPantalla Global
*
SPORTS SCREEN: The eternity of the phantom goal