"Human Valley - Spring. Microclima Zurich Tropical / Experimento Improvisacional by Pablo Leon de la Barra": Inspired by Balzac's imaginary journey from Paris to Java, Microclima Zurich Tropical presents real and imagined journeys into the tropics and other jungles, it also includes a library and a cine club. "Yuksel Arslan - Artures" presents for the first time a selection of over 200 works since 1959 outside of Turkey and focuses on the so called "Artures", works on paper using a unique technique with special paints and being marked by an expressiveness that Delacroix has already looked upon as a typical characteristic of the orient. 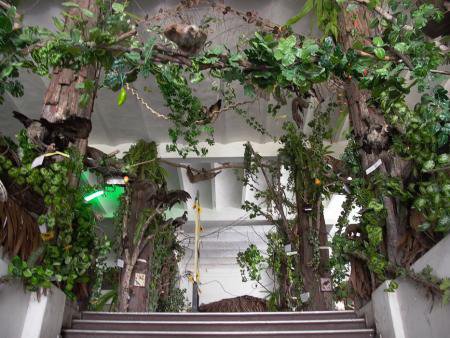 Freely inspired by Honoré de Balzac's imaginary journey from Paris to Java ("Voyage de Paris à Java", 1832), "MICROCLIMA ZURICH TROPICAL" presents real and imagined journeys into the tropics and other jungles. MICROCLIMA proposes an immersion into a different microclimate, and with it shifting points of references giving visibility to narratives produced in other climates and geographies.

BIBLIOTECA AMAZONICA is inspired by Mantilla and Chaves' research into the amazonic libraries of Iquitos in Peru ("In the jungle there is a city, in this city there is a library, and in that library is the jungle") and in Dominique Gonzalez-Foerster's investigation on the future of books ("Is it possible to expand this library, and if so, how can it be done in a completely different way?") and the relationship between text, space and climate as explored in her exhibition "Chronotopes and Dioramas" at Dia Art Foundation/Hispanic Society of America in 2010.

CINE CLUB DE LOS TROPICOS is a changing program of artists' films, which – although having no direct relationship to Balzac – explore realistic narratives, present panoramic portraits of different aspects of society, and share the Balzacian ambition of creating fictions (and realities) as big as life. Artist films in the program include amongst others: Gilda Mantilla and Raimond Chaves, "An Uncomfortable Eagerness" (2011) about their research done in the Amazonian Libraries of Iquitos; Javier Bosques, "The Splinter from the Tree" (2007), a personal portrait of the artist's family life and history; Silvan Kälin, "Lagoa do Ouro" (2008), a telenovela (soap-opera) presenting a microcosm of the real life dramas of a small village of Pernambuco, Brazil.

In the course of the exhibition the presentation will grow over the space – works and books will be added, the film programme extended. "MICROCLIMA ZURICH TROPICAL" also celebrates Balzac's attempt to create his own microclimate, a failed attempt to transform the land around his house in Paris into a pineapple farm.

Pablo León de la Barra is a thinker and an exhibition maker.

Pablo León de la Barra thanks architect Douglas Stewart for collaborating on thinking the idea of the Microclimate, developed one night at a night club in London's East End, where they identified (and later decided to join) a group of men dancing without shirt and creating their own microclimate in London's cold winter weather.

The exhibition is curated by Beatrix Ruf in collaboration with Oliver Zybok and will travel to Kunsthalle Düsseldorf and Kunsthalle Wien.

Until recently, Turkish artist Yüksel Arslan (born 1933, lives and works in Paris) remained almost unknown to a broader public. In 1962, he left his homeland and went to live in Paris where he has worked ever since on a visual oeuvre by and through the reception of cultural, sociological, philosophical and artistic literature in his apartment. The exhibition at Kunsthalle Zürich presents for the first time a selection of over 200 works since 1959 outside of Turkey and focuses on the so called "Artures", works on paper using a unique technique with special paints and being marked by an expressiveness that Eugène Delacroix has already looked upon as a typical characteristic of the orient. Thematically, the work is permeated by a confrontation with the relationship between thought and mysticism, between myth, science, and visual arts, and the philosophical, literary and musical currents which might be described as the foundation of Western thought, in the awareness that the knowledge anchored here could hardly have arisen without the experience of other peoples and cultures.

Arslan does not use classical paints, but mixes pigments with various vegetable extracts, bodily fluids, other natural elements (petals, grass etc.), and additional substances such as oil, coal and stones. This process of production is an important part of the pictorial invention process, and does not represent any separate preparation of the actual artistic work. In Arslan's opinion painting, since the dawn of modern art, has degenerated into a medium whose origins numerous artists have increasingly neglected. Like Jean Dubuffet, the artist seeks to throw off the ballast of today in order to bring out what - before the beginning of a culture - constituted the "essence". It is only the path via what has superficially been transcended by culture, but in reality only distorted, that allows Arslan to rediscover the pristine, which he then consistently venerates, for example procreation and sexuality. As he occupies himself with modern and ancient languages, history, philosophy, music and ancient cultures, he is familiar with the cultural "ballast". Arslan has come to recognize that much of this does not reflect the essence of man. He senses similarities of the vernacular in the origins of cultures all over the world.

Arslan's "Artures" are created in groups that unite not only socially relevant themes and questions, but also thematize the experiences that relate to his own life story. The three cycles with the titles "L'Homme I - III, Le Capital" are general in their approach, while the two series "Influances I & II" stand for the artist's occupation with personalities and their achievements, which are not only relevant to his approach but also emphasize his great affinity to literature and music. In this sense he has created works relating to, among others, Johann Sebastian Bach, Charles Baudelaire, Samuel Beckett, René Descartes, Sigmund Freud and Franz Kafka. In the series "Autoartures", Arslan deals exclusively with autobiographical events: memories relating to his family and his background - the confrontation with his own pristinity.

The term "pristinity" is often associated with "myth". Many works, both in their structure and in their use of text and pictures, resemble scientific tables and taxonomies at first, for example "Arture 439", "L'Homme 80" (1992), "Arture 463", "L'Homme 104: Schizophrénies" (1996) or "Arture 467, L'Homme 108: Schizophrénies" (1996). It is from this confrontation that, for the artist, the ongoing actuality of archetypes and myths is derived: they are forms of pristine classificatory images that show mankind still in harmony with nature. These ideas are based on something other than a sensibility that romanticizes a yearning for nature. What Arslan is aiming at is the pristine unity in the cycle of creation, such as for example in "Arture 362, L'Homme III" (1986) and "Arture 378, L'Homme XIX: Course de spermatozoids" (1987). This unity is symbolized for example in the image of man, beast and landscape. "Being an animal" is in his opinion being placed by fate in the rhythm of birth, existence and death, and transferred from the coincidentally individual into the sphere of the general. Thus for Arslan the animal is often the inwardly sought-after partner of the human being, the encounters are not hostile, but natural phenomena like the wind, thunderstorms, lightning strikes, flames and electrical discharge. In line with this understanding, he is interested by the particularities of the landscape, less in the topographic sense than as the expression of hidden forces. At the same time they appear as pristine codes that express a reciprocal relationship between all earthly occurrences. For Arslan, the pristine is the as-yet-undivided.

Not just since Claude Lévi-Strauss have we known that myth represents an ordering structure "sui generis", and thus in no sense a pre-scientific stage of development on the historic path to any theoretical conceptuality. Myth is seen as a form of explication of the world in general, an explication in which, by analogy, everything is linked to everything else, and in accordance with which things are no mere lifeless objects, but integrated parts of a comprehensive order, and as such, represent particular qualities in each instance. Contrasted with myth, rational and functional thought necessarily means critique of myth, and ultimately brings about the dissolution of a thus represented whole. Immediate experience is replaced by the scientific principle of individuation and classification, or: causality rather than interpretation. By way of example, his works relating to gesture, schizophrenia or hallucinations can be mentioned: "Arture 381, L'Homme XXII: Névrotiques" (1988) and "Arture 385, L'Homme XXVI: Hallucinations" (1988). For all the inevitable abbreviation of the subject matter, this formula nevertheless shows that scientific insight is always coupled with a certain feeling of loss. Arslan makes this aspect clear. In the process, he shows that pristinity can only exist from the point of view of progress: individuation is an empty word without the concept of the whole. In correlations of this kind, then, there appears something that belongs to the past, something that has been superseded. Thus the mutual conditionality of pristinity and progress finds, so to speak, a graphic reflection in the dialectic of modernity's break with tradition.

A comprehensive publication with texts by Elodie Evers, Jacques Vallet, Oliver Zybok and a conversation between the artist and Beatix Ruf is planned (256 pages, German/English).