"An exploded and bewitched house with a floating roof" this is how Dwyer describes her solo show Panto Collapsar. As usual the artist ascribes deep symbolic meaning to the objects and artifacts she works with, evoking them as spiritual signifiers and using them to herald a community. 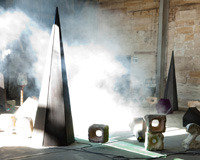 we are stardust (billion year old carbon) we are golden

Panto Collapsar, the title of Mikala Dwyer's new exhibition at Project Arts Centre, leads us to believe that the engine at the centre of our existence (the metaphorical star) is likely to collapse into a black hole in an action of buffoonery, mimicry and with audience participation. The hysterical splendour of the annual panto will be combined with an oblique golden storyline, including semblances of gold sensing, allusions to the facts and fictions surrounding gold, and its geological, mythological, or newly reported extra-terrestrial origins (supposedly introduced by meteorite impacts 4 billion years ago). Panto Collapsar might thus be called a micro-economic folktale.

The elements that will build and grow like a garden of unearthly delights are essentially a community and, as such, are totally dependent upon each other. When Dwyer brings objects, artefacts and materials together in a group formation, it is as though she's asking them to speak together of the future and of the unknown—as the artist puts it: to 'shore themselves up against everything they've lost.' This resonates in the exhibitions, revealing a sense of togetherness and communication amongst the individual pieces that are set up as though in conversation with each other—the installations or accumulations can resemble anything from a gathering or theatre set to the detritus of a black-magic ritual séance.

Hovering above a circle formation will be a sky filled with shimmering silver shapes, threatening to descend upon the skinny golden shapes that rise from the ground beneath it. Dwyer's golden baseline, or 'superstitious scaffolding' will populate the void between the hovering canopy of silver, floating 'O' shapes, marking the territory that for the sacred time of the exhibition will be a place protected by natural forces—dark, light, cosmic, and comical.

Mikala Dwyer is one of Australia's most important contemporary artists, one whose work has influenced generations of younger artists in the South Pacific. Her work is playfully mischievous while being deadly precise in its activation of form, and consistently presses at the limits of the potentiality of things—to be more, other than, or contradictory to what we might expect. She is also expert at harnessing or investing essential energy matter around objects. The effect is to leave you feeling as though you're in the presence of something mystical, which has temporarily come together before falling apart again. To ritualise, and to create a community of forms through her circular groupings, Dwyer sees the potential to give soul back to things that are dead.