From 1970 to 1987 Andy Warhol took scores of Polaroid photographs, the vast majority of which were never seen by the public. The second exhibition Tables of Content: Ray Johnson and Robert Warner Bob Box Archive shows the intense correspondance between the two artists. 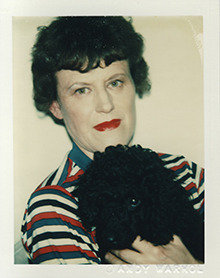 From 1970 to 1987 Andy Warhol took scores of Polaroid and black-and-white photographs, the vast majority of which were never seen by the public. These images often served as the basis for his commissioned portraits, silk-screen paintings, drawings, and prints. In 2007, to commemorate its twentieth anniversary, the Andy Warhol Foundation for the Visual Arts launched the Andy Warhol Photographic Legacy Program. Designed to give a broad public greater access to Warhol’s photographs, the program donated over 28,500 of Warhol’s original Polaroids and gelatin silver prints to more than 180 college and university museums and galleries across the country. Each institution received a curated selection of over one hundred Polaroids and fifty black-and-white prints.

This January BAM/PFA is proud to present selected Polaroids drawn from this extraordinary gift of the Warhol Foundation to the museum. The group reveals that superstars were not the only figures that Warhol photographed with his Polaroid Big Shot, the distinct plastic camera he used for the majority of his sittings. Over half of those who sat for him were little known or remain unidentified.

The number of images he took at each session varied as greatly as the figures he photographed. Repetition, a recurring motif in Warhol’s paintings, plays both a conceptual and practical role in his photography. By making several Polaroids, he had more material from which to work. By shooting at length, more about the sitter was exposed. Seen all together, the Polaroids destabilize the iconic status that a Warhol image assumes when displayed singly. On its own, a Polaroid image is fully identified with the artwork that ultimately grew out of it; the face depicted becomes a kind of signifier for larger cultural concepts of beauty, power, and worth.

Andy Warhol: Polaroids / MATRIX 240 is organized by Curatorial Intern Fabian Leyva-Barragan and Assistant Curator Stephanie Cannizzo. Special thanks to The Andy Warhol Foundation for the Visual Arts for making this exhibition possible. The MATRIX Program at the UC Berkeley Art Museum and Pacific Film Archive is made possible by a generous endowment gift from Phyllis C. Wattis and the continued support of the BAM/PFA Trustees.

In 1988, New York–based collagist Robert Warner began a correspondence with the enigmatic artist Ray Johnson. Until Johnson’s death in 1995, Ray and Bob continued their exchange, mostly by mail and telephone, and only occasionally in person. Over the course of their relationship Warner received hundred of pieces of mail art from Johnson, ranging from collages to a hand-delivered piece of driftwood. At one of their rare in-person meetings, Johnson gave Warner thirteen cardboard boxes tied with twine, labeled “Bob Box 1,” “Bob Box 2,” and so on.

Tables of Content displays all thirteen boxes and their contents. Warner has selected and arranged the letters, drawings, photocopies, and found objects like t-shirts, tennis balls, and random beach trash—the material of Johnson’s art—on an assembly of thirteen tables and surrounding gallery walls. Johnson annotated many of these things with personal codes, puns, and dark, irreverent jokes. Johnson’s work—collages, correspondence art, and performance events—remains mysterious and a bit hard to pin down. But his influences are obvious and surface repeatedly, among them Andy Warhol, Joseph Cornell, Rauschenberg, and Elvis Presley. His collage approach was diaristic, a stream-of-consciousness flow through the matter and memory of everyday life, shifting from one topic to another, across all variety of things. Johnson once remarked, “My work is like driving a car. I’m always shifting gears.” Tables of Content will particularly resonate with Berkeley audiences who viewed the recent exhibition Kurt Schwitters: Color and Collage.

Tables of Content: Ray Johnson and Robert Warner Bob Box Archive / MATRIX 241 is organized by Lucinda Barnes, chief curator and director of programs and collections, in collaboration with Robert Warner. The MATRIX Program at the UC Berkeley Art Museum and Pacific Film Archive is made possible by a generous endowment gift from Phyllis C. Wattis and the continued support of the BAM/PFA Trustees.