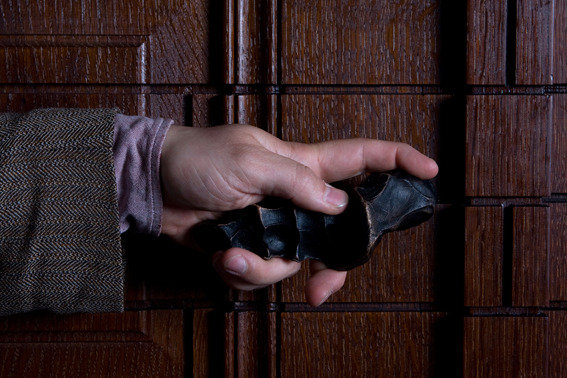 Christian Kathriner’s forthcoming exhibition at the KMD is a homage to Marcel Duchamp’s Trois stop- pages étalon (1913-1914, Museum of Modern Art, New York), one of this great artist’s most significant works. To use Kathriner’s own words, it interprets “Duchamp’s seemingly most prosaic work as a self- manifesting and genuine act of creation. The artist himself becomes the demiurg, the deus artifex who creates the world. The performative element – the dropping of the threads (and the chance inherent therein) – turns this tripartite work into a sublime cosmogony. As with God as Architect of the World (Bible moralisée, Vienna, Österreichische Nationalbibliothek, Vienna, Cod. 2554), the acts of creating and measuring are mutually dependent and complementary.”

Accordingly, in the upper, larger exhibition room of the KMD, Christian Kathriner will be showing a black patinated bronze relief entitled Little Cosmogony, which he has produced especially for this exhibition room. It is an imaginary mountain range created by the artist’s spontaneous shaping of a sheet of aluminium foil. Having crumpled the sheet as though he is about to throw it away, Kathriner smooths it out and uses it as a casting mould. Kathriner describes this process as his own personal coup des dés. This miniature Alpine range, created by a combination of the conceptual and the fortui- tous, is at the same time confronted with the sublime and real – the mountainous panorama that can be viewed from the Kunsthalle, a view that extends from the Vaud’s Tours d’Aï (2345 m) up as far as the four-thousander Grand Combin (4314 m) in the Canton of Valais. Thus Christian Kathriner has brought together art and reality in a clear, illuminating yet unusual relationship.

In addition, in the lower, smaller exhibition room, Kathriner will be showing two further black pati- nated small bronzes. These pieces are two studies for the door handles for his double-door installation Twin (likewise a homage to Marcel Duchamp), which he exhibited at the Lucerne Museum of Art in 2011. Here, too, the pieces are castings resulting from a performative act. Moreover, they refer to two other works by Duchamp: Feuille de vigne femelle (1950, Philadelphia Museum of Art) and Objet-dard (1950, Philadephia Museum of Art).

While the confrontation between what is – in the artist’s eyes – a concrete yet scaleless mountain range and the seemingly abstract yet true-to-scale door handles – both of them the product of a knead- ing yet now absent hand – takes the shift from reality a step further, Kathriner is also concerned with visualizing a mental association between artistic and evolutionary processes of chance, this also being Marcel Duchamp’s aim with his Stoppages of 1913/14.

­ Christian Kathriner was born in Sarnen, Switzerland, in 1974. He graduated from the School of Design in Lucerne (now Lucerne University of Applied Sciences and Arts, School of Art & Design) in 1990/91 and worked at the same time in the artisan’s printing shop of Martin Wallimann in Alpnach, Switzer- land. There then followed studies in pure art (Faculty of Painting), philosophy and art history at the Art Academy in Düsseldorf and, later, an intensive involvement in digital imaging in Berlin. He has numer- ous exhibitions at home and abroad to his credit, lastly at the Lucerne Museum of Art in 2011. Christian Kathriner lives with his parter and their child in Mettmenstetten, Switzerland.