Andreas Gursky makes very few pictures each year. The process of synthesis happens as much in the artist's mind during a period of reflection and gestation, as in the production of the image itself. Intuition and spontaneity - the surprise of a 'persuasive image' to the artist's highly receptive eye - are as important to his decision-making as technical rigour and discipline. 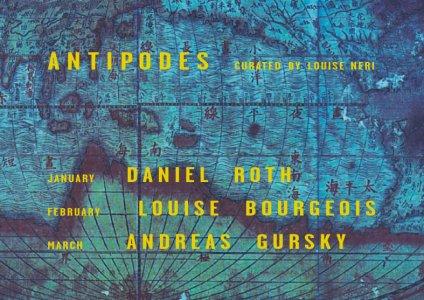 Let us imagine going up in a balloon or an airplane some hundreds of metres above the ground; and the mind, delivered from all it knows of man, tries to see and to record the essential facts of human geography with the same eyes and the same look which allows us to discover and sort out the morphological, topographical, hydrographic traits of the earth's surface. From this hypothetical observatory, what do we see? Or better yet, what are the human facts that a photographic plate could register as well as could the retina of the eye? Central to this expression is the division of the machine eye and the human eye, of the objective and the subjective, in general, part of nineteenth century debates and practices regarding photography and the issue of artistic expression and objective science.

Like Albert Kahn's extraordinary geographical archive, "Les Archives de la PlanÃ¨te" begun in 1909, Andreas Gursky's ongoing photographic interpretation of the contemporary world is exclusively visual. The geography that the Archives de la PlanÃ¨te represents explicitly posed questions of fact and truth, document and significance, and linked them to a notion of the visual and geography's photographic practices. These practices were ambiguous: on the one hand, naturalist and positivist, on the other hand, subjective and relativist. Almost one century later, the spectacular and highly controlled otherworldliness of Andreas Gursky's signature style draws on a great diversity of (often antithetical) motives, currents and methods, through which the artist has developed a dense, vivid and edgy dialogue between photography and painting, empirical observation and artfulness, high art and commerce, conceptual rigour and spontaneous observation. In consistently fusing the flux of life with the stillness of metaphysical reflection, he has created a Weltanschauung or world view that, as viewers, we have the impression of always being outside of looking in: in this fact, we are constantly reminded that what we are looking at is not reality per se, but a reality of the artist's invention.

Andreas Gursky makes very few pictures each year. The process of synthesis happens as much in the artist's mind during a period of reflection and gestation, as in the production of the image itself. Intuition and spontaneity - the surprise of a 'persuasive image' to the artist's highly receptive eye - are as important to his decision-making as technical rigour and discipline. His processes of research and development, preparation, revision and production for each of the epic moments that make up his wide-ranging oeuvre are usually private, lengthy, and elaborate, often requiring strategic negotiations on a scale befitting their subjects. It is this often imponderable 'how' of Gursky's pictures together with the 'what' that constitutes the deep mysteriousness and complexity of their visual register.

From initially using the computer as a retouching tool, Gursky began to work increasingly with the transformative potential of its fluid capabilities, sometimes fusing elements of several shots of the same subject into a seamless whole and reworking the image pixel by pixel, at other times barely altering the image at all. But in insisting on using the astonishments of reality as his point of departure, he has avoided what Peter Galassi has referred to as the "overwrought outpourings of Surrealist kitsch in both the commercial and high-art realms," although his process has become increasingly baroque in both its conceptual ambition and structural reach, just as the subjects themselves have expanded and proliferated from his immediate vicinity-the industrial and urban environment of central Germany-to map and distill the emergent patterns and symmetries of the high-paced world at large. For example, one can enjoy speculating that an early, strangely compelling picture of chickens in a small field that possesses an almost Vermeerian sense of composure, may have at least partly inspired Gursky's latest image, a subdued but no less compelling composition depicting a seemingly infinite geometry of gridded cattle yards dotted with drifting livestock, located in an expanse of empty, unnamed, indeed almost unimaginable, geographical elsewhere.