Even Heroes Grow Old. Language is central in the work of the Swedish artist. Language as words - meaning-creating carriers of identities, ideas and political and ideological structures - are placed against the artistic, conceptual and visual language in Lagomarsino's installations. 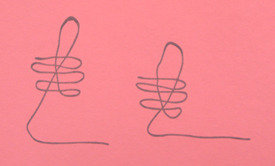 Language is central in the work of Swedish artist Runo Lagomarsino. Language as words – meaning-creating carriers of identities, ideas and political and ideological structures – are placed against the artistic, conceptual and visual language in Lagomarsino’s installations, which form statements that point towards the gaps and cracks in our explanation models, by questioning accepted images and truth claims, and highlighting language’s precarious foundation.

In the exhibition Even Heroes Grow Old, which starts the spring season at Index, a type of writing literally forms its backdrop. The artist has produced a wallpaper, whose pattern is composed of a signature. It belonged to the Spanish conquistador Francisco Pizarro, who, at the beginning of the 16th century, conquered Peru, overthrew and had executed the last Inca emperor, Atahualpa. According to myth, the capture of Atahualpa began when he threw a Bible on the ground. The Incas had no written language and the written word represented no authority for its ruler. It is an ironic paradox that Western rationality, which is expressed in written form and which was a precondition for the development of colonialism, was forced on a people by a man who himself was not able to partake in the agreement constituted by the written language – Francisco Pizarro’s signature, his rubrica, comprises a picture, since he could not read or write.

At first sight, Runo Lagomarsino’s installation may resemble a representation of a nursery. Pizarro’s rubrica is a friendly squiggle that forms a pattern against a strong, pink background. On closer inspection, the pink colour chosen by the artist seems a little too intense, a little too overwhelming: it takes over the room. Pizarro’s rubrica (a word whose meaning comprises the signature as well as a further significance: a standardised code of conduct, authoritarian rule, instructions) occupies the place, an image of colonialism’s omnipotent, defining ability. At the same time, the work contains a disarming counter-movement: the childlike expression, the exposed inability and ignorance. The signature may be associated not only to issuing of orders but also to testimony and submission of evidence.

In several of his works, Runo Lagomarsino points to history’s and the scientific systems’ ambiguity by undermining dominant narratives. Perdidamente Paris (2010), which is part of the installation at Index, is an image of the prototype metre bar in marble, which has been on display on 36 Rue de Vaugirard in Paris since 1795. Just like Trans-Atlantic (2010), the work sets out from the established Western world view, which is based on the rational measuring of the world. While Trans-Atlantic describes a voyage from Europe to South America in a format that challenges both the Renaissance perspective and the image of the Atlantic as a surface to be measured and organised in geographic positions and which enabled maritime trade, colonialism and commerce, Perdidamente Paris addresses of another of modernity’s preconditions, that is, the common systems of measurements and their fundamental arbitrariness. Seeing that the metric system is based on the prototype metre bar it cannot be used to measure the metre. The prototype metre bar is an immeasurable unit – basically just an agreement, as is language.

The installation also includes the slide work Contratiempos (2009-10). The work comprises a series of images from Parque Ibirapuera in São Paulo and the footpath that connects the park’s different buildings. On the concrete surface, the artist has observed and photographed damages the appearances of which resemble the South American continent, images that emerge in the cracks. The work title may be read as the musical composition technique counterpoint – two or more independent and parallel voices – narratives – but the Spanish word may also be interpreted as “misadventure”. The work points simultaneously to the misdeeds perpetrated by European colonialism and to the possibilities of a different, alternative history writing.

Pizarro’s rubrica hovers on the border between language and image and thus, in itself, constitutes an image of Lagomarsino’s method with its connections between politics (manifested in language) and aesthetics (expressed in images, rhythm, poetry). The rubrica with its wealth of political connotations is simultaneously an illegible and an untranslatable sign. The aesthetic language employed by Lagomarsino in his works generates knowledge by oscillating between different reference systems, by slippages and dislocations. The image of transference is central in Lagomarsino and his work rests on the passages between languages, continents and narratives.

Born in 1977, Runo Lagomarsino lives and works in São Paulo.