Passage dangereux. On the occasion of her 100th birthday, are showing sculptures, installations, etchings, tapestries and works made of fabric from the last 15 years in her life (1911-2010). Bourgeois' body of work is crossed by the existential themes of human existence: fear, dependancy, memory, sexuality, love and death. Works on view include an over 9-meters-high, oversized spider made of bronze, steel and marble. 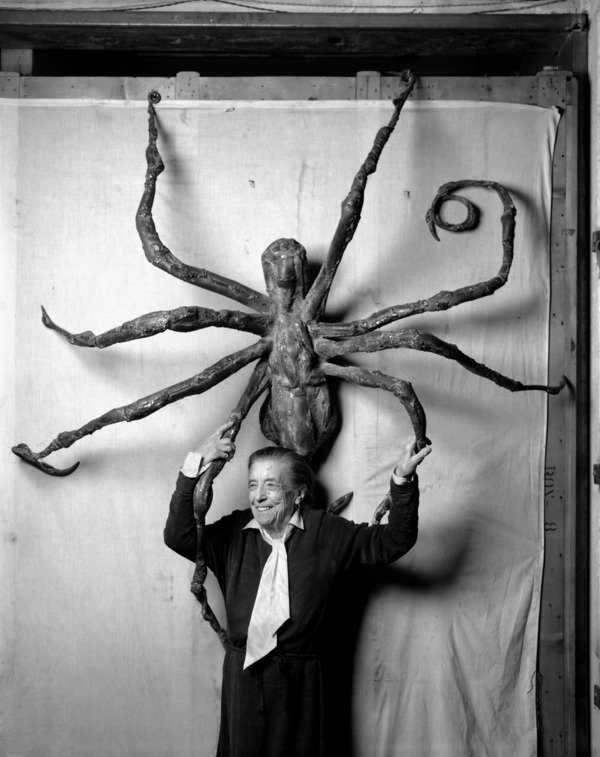 Louise Bourgeois is an artist of the century. On the occasion of her 100th birthday, the Hamburger Kunsthalle will be showing sculptures, installations, etchings, tapestries and works made of fabric from the last 15 years in the life (1911-2010) of one of the most important and influential artists of our time. Several works in the exhibition have never been exhibited publicly until now.
Enthroned on the outdoor plateau in front of the Kunsthalle is an over 9-meters-high, oversized spider made of bronze, steel and marble: Maman (1999). As fearsome as it is impressive, this monumental sculpture is one of Louise Bourgeois' key works. The title Maman ("mother") points to the fact that Bourgeois understood this work to be an homage to her mother, who worked as a restorer of tapestries. At the same time, the tireless restoring and rebuilding of woven material, which is also characteristic of the spider, also becomes a symbol for endless, always repeating and ever-renewing life in general. Louise Bourgeois' body of work, which speaks a very unique, fascinating visual language, is crossed by the existential themes of human existence: fear, dependancy, memory, sexuality, love and death.

The artist's unique flair for handling materials will become especially evident in the exhibition. Works on view include the so-called Cells, cage-like spaces filled with objects and small sculptures such as the Passage dangereux (1997), the largest and most spectacular piece in this series of works. The fourteen-part series of etchings À l'infini (2008) from the collection of the Museum of Modern Art in New York will be presented in Germany for the first time. Each of the large-format, hand-worked pieces shows lines intersecting and knotting with each other. They come to form shapes that resemble to bubbles, cells or intertwining human bodies and – having been painted blood red – are reminiscent of blood vessels. At the same time, the work À l'infini ("to infinity") can also stand for time, for man's path of life. In the cloth works from the artist's last, remarkably productive creative period, the thread moves into a pattern, an abstract formation of great beauty.

At the age of 98, Louise Bourgeois came to embody several different epochs both as a person and in her life path. Born in Paris, she experienced the Parisian Modernists as a young woman, studied under Fernand Léger among others and moved in Surrealist circles. In 1938 she moved with her husband, the American art historian Robert Goldwater, to New York. There she came into contact with other French artist émigrés surrounding Marcel Duchamp and befriended the key players in Abstract Expressionism. Though Bourgeois appreciated the dominant U.S. tendencies towards Minimal- and Pop Art, she never became affiliated with one of the existing groups. Rather, Bourgeois developed her own complexity of style, one that anticipated many of the concerns of a younger generation of artists.