Wordpharmacy is a visual installation that celebrates this ambitious semantic and medicinal project. Playfully equating the structure of language with pharmaceutical products, the publication consists of ten medicine boxes, each representing one of the ten word-groups. 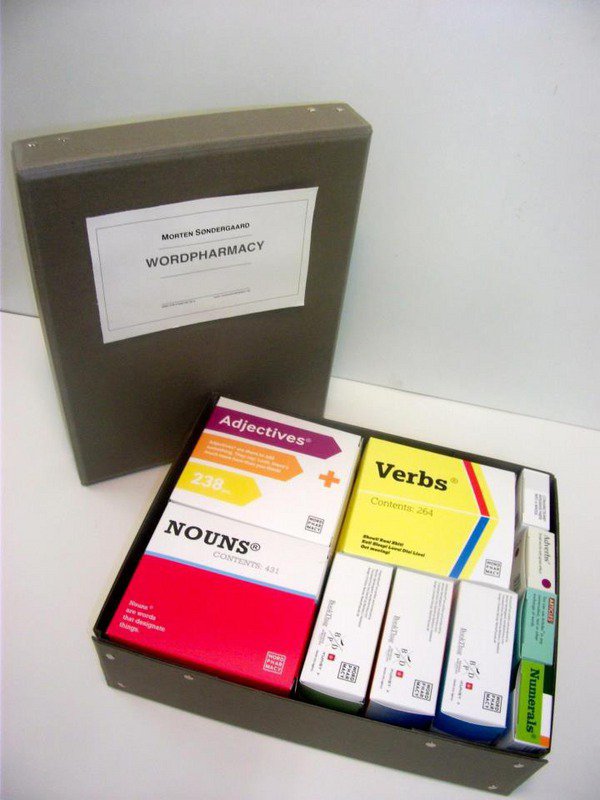 Broken Dimanche Press is proud to announce the exhibition Wordpharmacy by Danish writer and artist Morten Søndergaard. To coincide with the publication bearing the same name, Wordpharmacy is a visual installation that celebrates this ambitious semantic and medicinal proje...ct. Playfully equating the structure of language with pharmaceutical products, the publication consists of ten medicine boxes, each representing one of the ten word-groups. Each box contains a leaflet that functions as an instructional poem, guiding the reader’s ingestion of the given word group. In order to fully realise the helpful nature, Broken Dimanche Press are happy to have our Büro transformed by Søndergaard into a literary pharmacy, including authentic apothecary fixtures and fittings.

By rewriting already existing instructions for the use of medicine, Wordpharmacy playfully intertwines the structure of language with the healing principles of various medicaments. Like pills, language is something to be consumed by the body, and in turn it does not only affect our conceptions of things, but it also comes to designate our very corporal movability in the world. The artist himself will be present during Wordpharmacy, ready to prescribe suitable words for bodily as well as psychological malfunction.

The exhibition will run until february 16. Opening times 14-18h and by appointment.

Morten Søndergaard’s (born 1964) debut collection of poetry, Sahara i mine hænder (Sahara In My Hands) from 1992 has been followed by a succession of works which have won him both critical acclaim and a number of literary awards. He was twice nominated for the Nordic Council Prize for Literature, and his books have been translated into many languages. Constantly exploring new ways to present language, Morten Søndergaard has produced musical and dramatic works and in recordings, exhibitions and installations centred on language, sound and movement. In its Danish version, Wordpharmacy has previously been exhibited at Nikolaj Copenhagen Contemporary Arts Center, Bakkehusmuseet and at The Skovgaard Museum.