The exhibition La ruine fructueuse presents a retrospective of Van Caeckenbergh's oeuvre with works dating from the 1980's to the present day, including a reconstruction of the artist's studio. His sculptures, collages, models and drawings connect small, everyday objects with all-encompassing frameworks, systems and great world discoveries 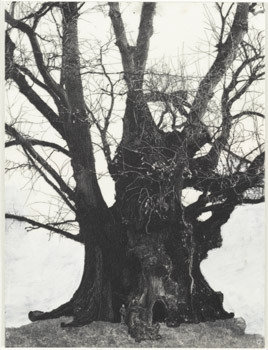 In his mysterious, baroque oeuvre Patrick Van Caeckenbergh (°1960, Aalst, Belgium) depicts the world and his own environment. His sculptures, collages, models and drawings connect small, everyday objects with all-encompassing frameworks, systems and great world discoveries. Van Caeckenbergh's artwork stimulates the imagination and often reminds one of fables and fairytales. After numerous solo exhibitions abroad, M presents the first extensive solo show by Patrick Van Caeckenbergh in Belgium since long. The exhibition at M presents a retrospective of his oeuvre with works dating from the 1980's to the present day, including a reconstruction of the artist's studio.

The exhibition in M shows work starting from the 1980's, a period where Van Caeckenbergh defined his own mode of artistic expression. The detailed collages from this period incorporate wallpaper from his home, numerous references to the environment in which he grew up as well as to his own oeuvre. At the same time, they bear witness to an overwhelming desire to capture and store all the knowledge in the world. Relying on the insights he had gleaned from books, movies and art history, he tried to grasp the world with his own systems and models. He connected mundane elements from the everyday world with comprehensive global systems and grand discoveries. In the 90's Van Caeckenbergh began to explore his own life and attempted to portray the multitude of complexities of the human condition. The process of germination, flowering and decay are contained in magnificent sculptures. Motifs such as the tree of life, beetles, the procession of caterpillars, and cuttings of bits of bare skin now make their appearance, and the everyday processes of rotting and decay are increasingly employed as metaphors.

The artist's current work coincides with his move to the rural village of Sint-Kornelis-Horebeke. This work exudes a new sense of peace. It is a reflection of the soothing rhythm of the Flemish countryside. The world is now depicted less complexly, and the focus has shifted to recognisability. The artist has retreated into a chock-full studio that is described as a cigar box and that is now on display in the exhibition. In 2010, he embarked on a project known as The Old in Years, an ever-expanding series of drawings based on pictures of old trees, a detailed record of wise trees of life drawn with seemingly photographic realism.

A new monograph on his works is being published in conjunction with the exhibition: