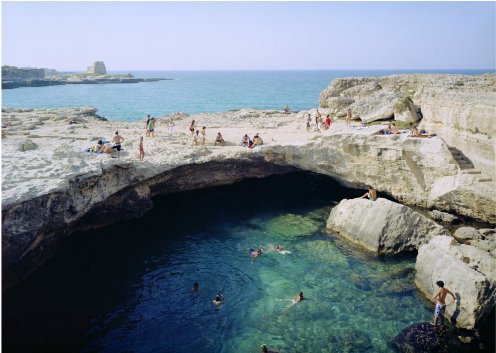 An Italian Perspective/Una Prospettiva Italiana presents a new context in which to consider these photographers within the history of Italian photography as each artist addresses the theme of cultural identity through topographical exploration. The exhibition investigates not only the differences in aesthetic approaches among the photographers, but also generates a dialogue concerning new views, wider perspectives, and thoughts on identity of Italian photography through unifying threads and underlying sensibilities.

Luigi Ghirri, a pioneer of contemporary color photography, whose work from the early 1970s until his death in 1992 comprises a key part of the conceptual photographic tradition that shifted attention from the manual processes of creating an object to the examination of the nature of that object and its relation to the reality recorded by photography. Ghirri's visually profound and delicately colored images examine the nature of representation and perception. Despite their small size and modest demeanor, Ghirri's prints anticipate the large scale contemporary work of later photographers.

Originally trained as an architect, Gabriele Basilico's lifelong fascination with the city as a densely collaged environment is reflected in his landscape photographs. Basilico's images are marked by an unsettling stillness and a notable absence of people, an aesthetic that propels architecture and landscape to the forefront while engaging the viewer's attention to often overlooked places and telling details. The themes of spatial isolation and urban indifference persist throughout his work, as he documents the continually evolving urban landscape of the post-industrial-post-modern-city.

After working as a photojournalist and film cameraman, Massimo Vitali acquired international renown for his large-scale photographs of communal spaces, such as Italian beaches, parks, and discos, in which he explores the ethnographic relationship between man and nature through depictions of anonymous people during their leisure time. Vitali stations his camera on a raised platform and waits for the landscape to fill with people, watching their individual dramas, complexities, and a multitude of interactions unfold.

Using a large format camera, Vincenzo Castella explores the contemporary urban and industrial landscape of the places he knows well, including Milan and Naples. Influenced by his background in anthropology, Castella chronicles and synthesizes the urban landscape to investigate the commonalities and differences between cities of the Western world. Through minute details and distant horizons, Castella's urban overviews compare and contrast not only the evidences of history, but proof of unstoppable technological change.An Italian Perspective/Una prospettiva italiana includes images from Siti, Castella's vast series of color photographs that he began in the late 1990s, as well as his latest work #3Venice, completed in January 2012 specifically for the exhibition.

An Italian Perspective/Una Prospettiva Italiana is presented in conjunction with Peripheral Visions. Italian Photography in Context (1950s-Present), a survey of the past sixty years of Italian photography curated by Maria Antonella Pelizzari at the Bertha and Karl Leubsdorf Art Gallery at Hunter College.

Howard Greenberg Gallery is pleased to announce New York in Color, an exhibition of photographs by artists including: Bruce Davidson, Ernst Haas, Saul Leiter, Helen Levitt, Joel Meyerowitz, Marvin Newman, and numerous others. The exhibition captures the visual spirit of New York through a wide array of vibrant, romantic, graphic, and consistently colourful images that describe the city in ways not achievable through a monochromatic palette.

It was not until the 1950s that color film offered an accessible artistic medium; prior to that time color photography was a medium primarily confined to fashion, advertising and low quality family snapshots. In fact, there was resistance to color photography in the artistic community and a distinct bias against its use by many in the field. But over the next few decades, as the visual environment of New York increased in intensity as a result of the convergence of commerce and technology, advances in color photography kept pace and a new acceptance for the medium evolved. Many photographers began to experiment with color and the results were striking.

Saul Leiter came to color photography as an accomplished painter and fashion photographer and invented his own poetic and nuanced vocabulary for describing New York. The layered, muted tones of his work are expressive in a way that was new for photographic imagery, particularly when depicting a subject as gritty and stark as the city.

Ernst Haas was seriously experimenting with color photography in the early 1950s and in 1962 was the first artist to have a show at MoMA devoted to color photographs. Through long exposures, his photographs captured patterns of light and motion.

Marvin Newman, a member of the Photo League, had studied at the Chicago Institute of Design where experimentation was encouraged. He captured the garishness of Times Square and the jarring chaos of 42nd Street in images that blend elements of street photography with abstraction.

As a successful art director and graphic designer, Joel Meyerowitz understood the potential of color when he began photographing the streets of New York in the early 1960s. He concentrated on the interplay between light and shadow, which when expressed in color, took on a heightened level of specificity and intimacy.

A myriad of other artists and approaches are present in the exhibition, each image possessing its own particular style, emotional state and palette. From the soft, lyrical tones of Helen Levitt's children and the intensely, saturated spectrum of Bruce Davidson's subway, to the graphic compositions of Jeff Mermelstein and Jerry Dantzic, to the collaged images of Susan Wides and staged tableaux of Gail Albert Halaban, the exhibition radiates visual dynamism and artistic innovation.