In Ramette's work, drawings play the role of schematic drafts for fleeting conceptual whims. They often represent a sort of crystallization of absurdist propositions, dreamlike notions where the laws of physics and logic no longer hold sway. 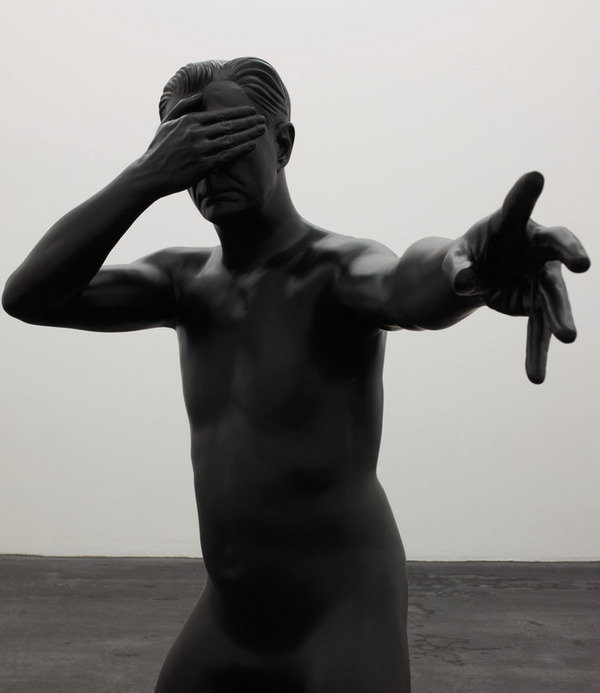 Most well known for his staged photographs of physically improbable situations, Philippe Ramette simultaneously clarifies and complicates ways of how we see and view the world. For his latest exhibition at the Galerie Xippas, Philippe Ramette continues to indulge his penchant for perceptual gamesmanship by means of drawing and sculpture.

To experience an exhibition by Philippe Ramette is to enter a field of questions regarding what is tangible, or what can constitute the physically plausible.

In the work of Philippe Ramette, drawings play the role of schematic drafts for fleeting conceptual whims. They often represent a sort of crystallization of absurdist propositions, dreamlike notions where the laws of physics and logic no longer hold sway. Consequently, his indexical-scale sculptures, also shown in this exhibition, present a similar will to illustrate the possibilities for entropy within the realm of the rational. In fact, all of the artist’s work deals with the staid rationality of the commonplace: as seen in the word-play employed in his titles, or objects such as “Lighting Rod Seat” (2001), or “Space for guilt” (1993-2002). The artist feeds off of banal experience to expose its potentially uncanny cracks, or to propose extra-ordinary associations that serve to show the precariousness nature of the codes that govern our daily lives. If one were to summarize the meta-narrative driving the work of Philippe Ramette, one might say that he rationalizes the irrational by defying the world of physical laws, thus rendering his improbable propositions plausible.

In the work of Philippe Ramette, his objects-cum-metaphors breathe a certain anthropomorphism. There is a thin line between the use value of his objects (diving boards (1995-2004), “Object to view a beaten path” (1991)) and it’s inherent properties (some chairs dream of escape, others commit suicide). These objects are in constant dialogue with their human characteristics, as these tools are ultimately agents of the spirit, of imagination. All this considered, it is no surprise for the artist to push this logic to present human-scale figures. Coming from his most recent projects, mostly photographic but more recently performative, Philippe Ramette has taken the path of discretion by choosing a strategy of camouflage and disappearance within the gallery’s architecture. Digitally scanned and produced in resin, these figures punctuate the gallery space and are once again referring to the artist’s body. Black or white, these shadow-like figures are multiplied within the space, and accompany the wandering viewer towards the next representation of the artist, who is once again, fully exposed. If the face is somewhat disconcerting, it is due to it’s multi-tasking function expressing joy and sadness in a single expression (“Tragic-Comic Portrait” (2011)).

The narrative path drawn by Philippe Ramette, composed of characters in a state of uncertain suspension, leads to a portrait where the unity of the self appears impossible. Like in his recent personal exhibition at the Crac in Sète, the artist, with his simultaneously discreet and familiar presence, comes across as an ironic and mysterious oracle, opening doors to other potential possibilities. Philippe Ramette astutely shows us that

“… nobody can know if the world is fantasy or reality, or if there exists a difference between dreaming and living …”

Born in 1961, Philippe Ramette lives and works in Paris, and has recently been the subject of several personal exhibitions.