Spies in the House of Art

Since the 1980s, a number of contemporary artists working in photography, film, and video have taken as their subject the art museum and how we view specific works from the canon of art history. This group show draws largely from the Museum's collection to focus on artists from the last three decades who explore the secret lives of museums, featuring 17 works, half of which have never been shown before at the Metropolitan. 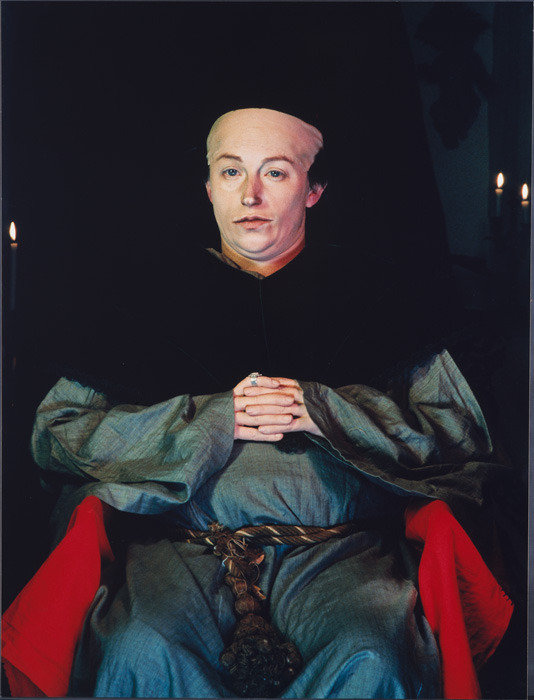 Curated by Douglas Eklund, Associate Curator in the Department of Photographs

Since the 1980s, a number of contemporary artists working in photography, film, and video have taken as their subject the art museum and how we view specific works from the canon of art history. Spies in the House of Art: Photography, Film, and Video on view at The Metropolitan Museum of Art from February 7 through August 26, 2012, draws largely from the Museum’s collection to focus on artists from the last three decades who explore the secret lives of museums. This installation in the Joyce and Robert Menschel Hall for Modern Photography features 17 works, half of which have never been shown before at the Metropolitan.

Among the highlights of this presentation are Francesca Woodman’s Blueprint for a Temple and Rosalind Nashashibi and Lucy Skaer’s Flash in the Metropolitan, a 16mm film shot after-hours in the Museum’s galleries. Also included are photographs and videos by contemporary artists Lutz Bacher, Lothar Baumgarten, Sophie Calle, Tim Davis, Andrea Fraser, Candida Höfer, Louise Lawler, John Pilson, Cindy Sherman, Lorna Simpson, and Thomas Struth, as well as two works from the mid-20th century by Diane Arbus and Joseph Cornell and a print by Peter Nagy. A complement of a dozen photographs from the medium’s beginnings to the early 1970s by Eugène Atget, René Magritte, Edward Steichen, and Dan Weiner, among others, will be shown nearby in the Robert Wood Johnson Jr. Gallery.

Spies in the House of Art: Photography, Film, and Video explores the complex relationship between artists and museums: how artists are inspired by the collections that museums display and are challenged by the authority that museums represent. The title plays on Anaïs Nin’s 1954 novel “A Spy in the House of Love,” and an artful balance of detachment and engagement, watchfulness and desire informs many of the works on display.

The centerpiece of the installation is the 16mm film Flash in the Metropolitan (2006) by the London-based artists Rosalind Nashashibi and Lucy Skaer. Using a strobe light, Nashibishi flashed brief illumination on sculpture and objects in the Metropolitan’s darkened galleries of Greek and Roman art, Ancient Near Eastern art, and the arts of Africa, Oceania, and the Americas, as well as the Medieval Sculpture Hall. As a result, the works of art—often devotional in their original function—become uncannily enlivened and animated, like actors in a mysterious new ritual.

Cindy Sherman and Francesca Woodman both imaginatively project the female form into the often male canon of art history. In Sherman’s renowned History Portraits series of photographs (1988-90), the artist imitated famous paintings of men and women from the Renaissance to the early 19th century. While on a yearlong fellowship in Rome, Sherman scoured local flea markets for costumes and props to make her self-portrait as a satiated Italian monk, featured in this installation. By aping the grand scale of Old Master paintings, Sherman showed how photography could compete against the grandiose Neo-Expressionist canvases of the 1980s, while making a stand for women artists working in a medium that was marginalized at the time.

Francesca Woodman, the daughter of two artists, grew up in Boulder, Colorado and Tuscany, and studied art in Rome in the late 1970s. This formative experience led to the creation of Blueprint for a Temple (1980), a 15-by-11-foot collage composed of 29 photographs on blueprint paper. Woodman was interested in making a monument to the faded traces of antiquity as they survived into the present. She posed friends and models as sculptural caryatids and composed the portico from pictures of black-and-white tiling commonly found in the bathrooms of New York City tenement apartments. This monumental work has been exhibited only once, at New York’s Alternative Museum in 1980, less than a year before Woodman died at the age of 22.

Another type of imaginative projection that takes place in the encounter between the artist and museum can be seen in Andrea Fraser’s humorous 30-minute video Museum Highlights: A Gallery Talk (1989). Set in the Philadelphia Museum of Art, Museum Highlights features Fraser performing her own script, culled and pieced together from a wide variety of museum publications and historical and sociological texts. Fraser’s character, the fictional docent Jane Castleton, aspires to be the ideal embodiment of the museum guide, yet her well-intended tour leads her astray into discussions of the restroom and coat checks. In an unprecedented commingling of old and new works, Museum Highlights: A Gallery Talk will be exhibited alongside paintings by William-Adolphe Bouguereau, Alexandre Cabanel, and Franz Xaver Winterhalter in the Galleries of Nineteenth Century, Modern, and Contemporary Art, just around the corner from the main installation.

Like Cindy Sherman, the French artist Sophie Calle explores what the viewer brings to a work of art and how that experience completes its meaning. For her 1986 series Blind, the artist met people who were blind since birth and asked them about their image of beauty. Calle photographed her subjects’ faces, printed their answers, and reproduced what each interviewee could only see in his or her mind’s eye. In the work included here, a teenager unabashedly admits the carnal desire provoked by a bronze nude in the Rodin Museum in Paris.

The vital function that museums provide as a conduit between the art of the past and the needs of the present is evoked brilliantly in a major work acquired recently by the Museum, The Restorers at San Lorenzo Maggiore, Naples (1988) by Thomas Struth. One of the artist’s first portraits, the photograph depicts four art conservators standing in a refectory where paintings that had been damaged in a recent earthquake were gathered for restoration. In The Restorers, Struth brings together the ideal and the real, epitomized by the central female figure, who seems to have stepped right out of one of the paintings under her care. This work also prefigures the artist’s large-scale color photographs of people looking at art in museums, churches, and other “cathedrals of culture” for a secular age.

Spies in the House of Art: Photography, Film, and Video is organized by Douglas Eklund, Associate Curator in the Department of Photographs.

Installation tours, gallery talks linking the themes of the installation to other modern and contemporary works in the collections, and teen programs will be offered in conjunction with this installation.