Works from the collection. Divided into four sections, "Tour d'Horizon" offers insights into the different interests and thematic standpoints that guided acquisition policies over the decades, but also addresses specific aspects and issues of how a collection is built. The show focuses on the presentation of exemplary works that have not been on public display in a long time, if ever. Organized along a chronology of acquisitions, the exhibition is accompanied by a program of events. 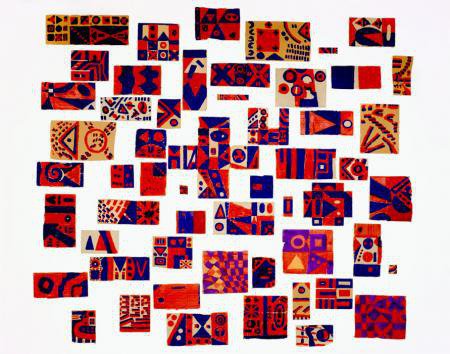 From February 11 to May 6, the museum presents an extraordinary exhibition in four sections of works from its collection. We also say farewell with this show to the museum’s temporary home at Hubertus Exhibitions. As last year, the museum’s collection will then visit an institution abroad: selections will be on display at the Museion – Museum of Modern and Contemporary Art, Bolzano (Italy), from October 6, 2012 to April 7, 2013.

After the collection exhibitions in Vaduz, Kassel and Krems, the migros museum für gegenwartskunst presents a variety of works from the collection before another presentation in Bolzano. The Migros-Genossenschafts-Bund's collection was created in 1957, when the Migros's statutes were set down, providing for the Migros-Kulturprozent (Migros Culture Percentage); the late 1970s brought a new focus on international contemporary art and greater professionalization. Divided into four sections, "Tour d'Horizon" offers insights into the different interests and thematic standpoints that guided acquisition policies over the decades, but also addresses specific aspects and issues of how a collection is built. The show focuses on the presentation of exemplary works that have not been on public display in a long time, if ever. Organized along a chronology of the collection's acquisitions, the exhibition is accompanied by a program of events that examine a wide range of questions about collecting and the history of the collection.

In the 1970s, the collection primarily bought Minimal art, German painting, and important Swiss positions. During the past two decades, by contrast, the main emphasis has been on contemporary artists (including Maurizio Cattelan, Spartacus Chetwynd, Christoph Büchel, Urs Fischer, Douglas Gordon, Rachel Harrison, Mark Leckey, Henrik Olesen, Rirkrit Tiravanija, Tatiana Trouvé, Christoph Schlingensief, and Cathy Wilkes) and their important precursors (including Marc Camille Chaimowicz, Stephen Willats, Katharina Sieverding, and Paul Thek). Over the years, several protagonists have been responsible for the collection's acquisitions policies: Urs Raussmüller (1978–1985), Jacqueline Burckhardt (1986–1990), and Rein Wolfs (1991–2001), who was able to found the museum in 1996. Since 2002, Heike Munder has been director of the museum and, as such, in charge of its acquisitions. More recent purchases for the collection have usually been made in connection with exhibitions for which the artists created works. Over the decades, this strategy has enabled the collection to buy several major installations and to closely dovetail its exhibition programming with its efforts to enlarge its holdings.

By collecting contemporary art, we continually reflect both on our understanding of history and on the concept of the present; at the same time, however, any collection anticipates a view of the future. For by collecting and preserving art, we give shape to a narrative, a canon. By taking a contemporary conception of the work into account, an institutional collection is defined by its dynamism rather than being a static site of preservation. This exhibition project seeks to examine specific aspects with regard to such complex temporality, but also illustrate the flexibility of the processes underlying a collection. "Tour d'Horizon" offers insights into the practices and paradigms of collecting as it has been conducted by the Migros-Genossenschafts-Bund over the past thirty years, and interrogates the current status quo. The exhibition also forms a connection to the project "Sammlung auf Reisen" (Collection on Tour), which has bridged the interim period the migros museum für gegenwartskunst has spent in its temporary exhibition space at Hubertus Exhibitions. The three exhibitions at the Kunstmuseum Liechtenstein, the Kunsthalle Fridericianum, Kassel, and the Kunsthalle Krems as well as the upcoming presentations at the Museion, Bolzano, and the Musée Rath, Geneva, have opened up new perspectives on familiar and time-honored works, but also drawn attention to less well-known items in the collection. The four parts of this exhibition project trace a line of development by presenting specific emphases of the collection's acquisitions during the various decades of its history, but also illustrate central challenges the work of collecting faces, an aspect the program of events will scrutinize more closely.

Sausages, bread and talk for the opening of the second part of "Tour d’Horizon"

With works by Atelier van Lieshout (est. 1995) and Carlos Amorales (b. 1970) on view, the second section of the exhibition exemplifies the period during the 1990s around the time the museum was founded. For the presentation of Atelier van Lieshout's "Installation Saucisson", a part of the work has been reconstructed due to reasons of conservation in collaboration with professors and students of HKB, specialization modern materials and media. Anna Comiotto (b. 1977), professor for conservation and restoration, will talk about her research project on food-art-conservation. Apt to the "Installation Saucisson", the museum invites to an opening with sausages and bread.

The third part of "Tour d'Horizon" will show Art & Language's (est. 1968) multipart installation "Homes from Homes II". On the occasion of the opening, migros museum für gegenwartskunst will screen Stefan Römer's documentary essay film "Conceptual Paradise". The film contains interviews with and statements by important artists, curators and critics of 1960s Conceptual Art. It provides an inside view on an art movement - of which Art & Language have been part of - that is pivotal for contemporary art practice.

The exhibition’s fourth section includes "Moneybox" (2009), a work by Gianni Motti (b. 1958) and one of the collection’s most recent acquisitions. On the occasion of the opening, the artist will stage an action in the exhibition.