The exhibition Parallel Worlds puts the emphasis on Ahtila's recent output, with a few earlier works to provide reference points, including Me/We, Okay, Gray a video work from the early 1990s that has since acquired iconic status. Alongside sculptures and drawings, the installations Where is Where (2008), The Annunciation (2010) and the recent Horizontal (2011). 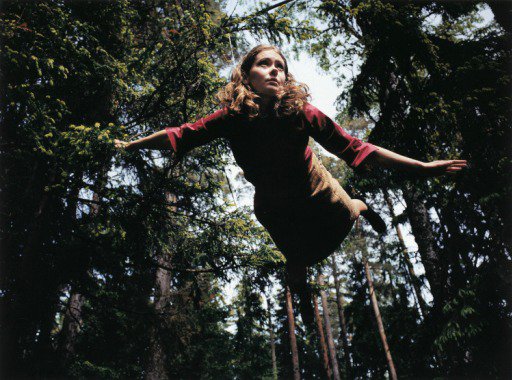 Eija-Liisa Ahtila is one of the most internationally recognised Nordic contemporary artists. Since her breakthrough in the 1990s, she has been a trailblazer in the development of cinematic installations. Eija-Liisa Ahtila’s works operate in the borderlands – questioning and exploring the conventions of the cinematic idiom and challenging habitual perspectives. Her position in the world of film became clear to a wider audience when she was on the jury for feature films at the Venice Film Festival in 2011.

“The cinematic device has this trust built around it, yet it can’t read all kinds of worlds and show them to us. I try to show that the worlds of, for example, nature and specifically human cinematic expression don’t meet. Even if they do exist in this world together, they are parallel,” says Eija-Liisa Ahtila, commenting on her work Horizontal (2011).

Eija-Liisa Ahtila is an idiosyncratic narrator in moving images, who probes questions on what it entails to be a human being and a subject. Her filmic installations challenge habitual perspectives and expose new perceptive worlds. She touches on and brings to life the current ongoing discussion on biopolitics and post-humanism.

Ahtila’s working process often begins with writing. Research on a subject is interwoven with fiction and references from art history and literature, in multifaceted narratives. A fascination for film as a technique and medium permeates Ahtila’s oeuvre. She twists and turns its very cornerstones, playing with the traditional cinematic narrative. Her works occasionally allude to a given, familiar style, culled from the commercial or documentary, undermining the viewer’s routine interpretation. In her large spatial works with multi-channel projections, the feeling of co-existing worlds is enhanced.

“A recurring element in her works is the sense of uncertainty – about distances in time and space, faltering mental states or indefinite identities. Ahtila seeks to make the viewer aware of how our experience of the surrounding world is both determined and delimited by our sensual perceptions.” says Lena Essling, curator.

The exhibition Eija-Liisa Ahtila: Parallel Worlds puts the emphasis on Ahtila’s recent output, with a few earlier works to provide reference points, including Me/We, Okay, Gray a video work from the early 1990s that has since acquired iconic status. Alongside sculptures and drawings, the installations Where is Where (2008), The Annunciation (2010) and the recent Horizontal (2011) are particularly noteworthy. Eija-Liisa Ahtila lives and works in Helsinki. Her works have previously been shown at the MoMA, New York, Jeu de Paume, Paris, Tate Modern, London, and Kunsthalle Zürich. She has participated in numerous international exhibitions, including the Venice Biennale in both 1999 and 2005.

This exhibition is accompanied by a fully illustrated catalogue in four languages, with essays by Cary Wolfe and Alison Butler, among others. Designed by Ida Wessel and published by Steidl.

Eija-Liisa Ahtila: Parallel Worlds is produced by Moderna Museet in collaboration with Kiasma - Museum of Contemporary Art. After the exhibition period in Stockholm, it will tour to Carré d’Art in Nîmes and Kiasma in Helsinki.

The exhibition at Moderna Museet is sponsored by Brummer & Partners.

Invitation to the press preview on 9 February at 10-12 am
Introduction by the director of Moderna Museet, Daniel Birnbaum, co-director Ann-Sofi Noring, and the curator Lena Essling. Eija-Liisa Ahtila will also be present.