Jean Genet...The Courtesy of Objects, Chapter Three, featuring Dan Fox. Chaimowicz is famed for his installations and performances that include preparatory photographs, collages and prototypes, as well as found objects and artwork by others. The exhibition has transformed the second floor of the gallery and the surrounding public library. 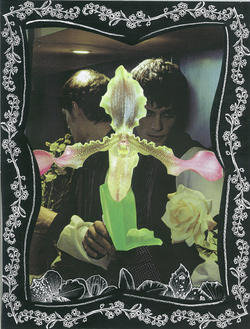 Focal Point Gallery is pleased to present Marc Camille Chaimowicz ‘Jean Genet… The Courtesy of Objects, Chapter Three, featuring Dan Fox’. Chaimowicz is famed for his installations and performances that include preparatory photographs, collages and prototypes, as well as found objects and artwork by others. As a Frenchman who works out of London, he has shown in major cities around the world including Paris, Zurich, Berlin, Vienna and New York.

Originally presented as part of a programme of events of the Norfolk and Norwich Festival 2011, part one of this three-part touring project was curated by Norwich University College for the Art’s Professor Lynda Morris. Entitled ‘Jean Genet...The Courtesy of Objects, Chapter One’, it explored themes derived from Genet’s life, from his empathy with Palestinian refugees and the Black Panther movement in the USA to high profile endorsements such as those of Jean-Paul Sartre (in a book entitled Saint Genet) and David Bowie (who wrote Jean Genie in tribute to Genet).

Part Two of the touring project took place at Nottingham Contemporary, and this exhibition also hosted the work of others, including six major sculptures and paintings from the 1950s by the great Modernist sculpture Alberto Giacometti, generously lent by the Fondation Giacometti, Centre Pompidou and Tate. These famous works included a portrait of Genet by his great friend Giacometti, as well as furniture designed in the 1930s. If Chaimowicz’s touring exhibition refers to Genet’s first play The Maids (1948), about two servants who revolt against their mistress, then his installations for all three incarnations of the project come in the form of strange and exquisite domestic interiors that offer a mental image of a space Genet might wish to inhabit. Thus, in its form at Focal Point Gallery, the exhibition has transformed the second floor of the gallery and the surrounding public library. Through the inclusion of Tariq Alvi’s A Poster for a Library (1995), and the installation of high-end wallpaper within its corridors and gallery, a building that houses a vast array of literature has become a seductive and politicised domestic interior infused with the life and beliefs of Genet.

This exhibition also contains two new and vital elements. The first of these is Chaimowicz’s recently completed The Casting of the Maids (2012), a video situated in the gallery’s project space that takes its prompt from Genet’s first play, and which contains a specially commissioned score by the writer and musician Dan Fox. This work lasts seven minutes and twenty seconds exactly, and should be seen within a totality of a complete work that links to the artist’s forthcoming road movie Times Ten which, at seventy-two minutes, will be precisely ten times longer than The Casting of the Maids. In turn, the second forerunner to this new film is Trailer, the slide presentation situated within Focal Point Gallery’s main space, which forms the content, research material and draft for Times Ten.

The second new element is the inclusion of the final and complete set of the artist’s collages. Divided into four quartets, these seventeen new images – the fourth quartet contains an anomaly resulting in five pictures – contain pictorial elements taken from mainstream fashion advertising and newspaper supplements such as How to Spend It.

As Chaimowicz noted during the installation of his Focal Point Gallery exhibition, magazines for the aspirational and wealthy such as How to Spend It and Country Life are some of the highest subscribed publications by prisoners in British institutions. This is a phenomenon the artist would like to envisage in relation to Genet’s own time in prison. Perhaps in an imagined contemporary scenario, the writer and his friends might find themselves studying similar adverts, features and country houses in preparation for their release back into mainstream society.

With clothing racks that suggest a change of attire, collages that present magical and transformative outfits, and a video that depicts maids dressing up, Chaimowicz’s third and final installation in this series is ‘prompted’ by Genet’s character, to address a fictional aspect of the writer, rather than as any direct political illustration of the man’s identity, such as the writer’s links with the aforementioned orphan states The Black Panther Party, The Red Army Faction and the Palestinian refugees. In this respect, Chaimowicz’s focus at Focal Point Gallery attempts to avoid the dogma of left-wing ideological practice with an accent on the central themes of the artist’s work, namely the enacting of alternative performative and aesthetic strategies that address artifice and the real within a social and political context.

England, Southend-on-Sea Borough Council and The Norwich and Norfolk Festival with kind assistance from Cabinet Gallery.