The exhibition explores his extensive legacy and influence on British art, how this played a role in the acceptance of modern art in Britain, alongside the fascinating story of Picasso's lifelong connections to and affection for this country. It brings together over 150 spectacular artworks, with over 60 stunning Picassos including sublime paintings from the most remarkable moments in his career, such as Weeping Woman 1937 and The Three Dancers 1925. 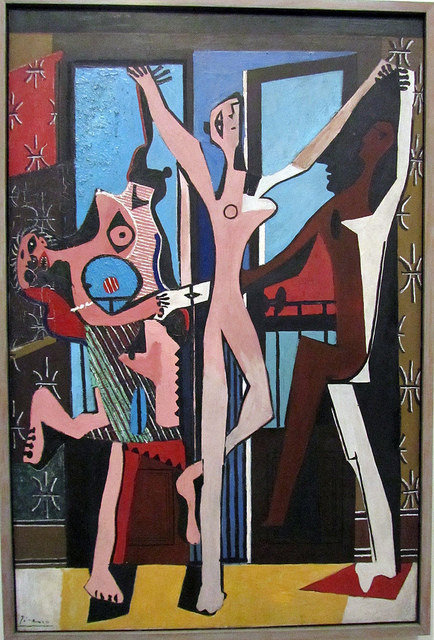 In February 2012 Tate Britain will stage the first exhibition to explore Pablo Picasso’s lifelong connections with Britain. Picasso and Modern British Art will examine Picasso’s evolving critical reputation here and British artists’ responses to his work. The exhibition will explore Picasso’s rise in Britain as a figure of both controversy and celebrity, tracing the ways in which his work was exhibited and collected here during his lifetime, and demonstrating that the British engagement with Picasso and his art was much deeper and more varied than generally has been appreciated. Pablo Picasso originated many of the most significant developments of twentieth-century art. This exhibition will examine his enormous impact on British modernism, through seven exemplary figures for whom he proved an important stimulus: Duncan Grant, Wyndham Lewis, Ben Nicholson, Henry Moore, Francis Bacon, Graham Sutherland and David Hockney. It will be presented in an essentially chronological order, with rooms documenting the exhibiting and collecting of Picasso’s art in Britain alternating with those showcasing individual British artists’ responses to his work. Picasso and Modern British Art will comprise over 150 works from major public and private collections around the world, including over 60 paintings by Picasso.

Picasso and Modern British Art will include key Cubist works such as Head of a Man with Moustache 1912 (Musée d’Art Moderne de la Ville de Paris) which was seen in Britain before the First World War, when Cubism was first introduced to a British public through Roger Fry’s two Post-Impressionist exhibitions. It will also include Picasso’s Man with a Clarinet 1911-12 (Museo Thyssen-Bornemisza, Madrid) and Weeping Woman 1937 (Tate), works which were acquired by the two most notable British collectors of Picasso, Douglas Cooper and Roland Penrose, both of whom were to become intimately associated with the artist and his reputation.

While many British artists have responded to Picasso’s influence, those represented in this exhibition have been selected to illustrate both the variety and vitality of these responses over a period of more than seventy years. This is a rare opportunity to see such work alongside those works by Picasso that, in many cases, are documented as having made a particular impact on the artist concerned; in other cases, they have been chosen as excellent examples of a stylistic affinity between Picasso and the relevant British artist. For example, David Hockney is said to have visited Picasso’s major Tate exhibition (1960) eight times, starting a life-long obsession with the artist. A selection of various Hockney homages to Picasso will be shown. In addition Francis Bacon's Three Studies for Figures at the Base of a Crucifixion 1944 (Tate) will be compared with Picasso’s paintings based on figures on the beach at Dinard which first inspired Bacon to take up painting seriously.

The exhibition will look at the time Picasso spent in London in 1919 when he worked on the scenery and costumes for Diaghilev’s production of The Three-Cornered Hat. It will assess the significance of his political status in Britain, from the Guernica tour in 1938-9 to the artist’s appearance at the 1950 Peace Congress in Sheffield. The final section will also consider the artist’s post-war reputation, from the widespread hostility provoked by the 1945-6 V&A exhibition which re-ignited many of the fierce debates about modern art that first raged before the First World War, to the phenomenally successful survey of his career at the Tate in 1960.