The exhibition features four international contemporary artists whose work engages scientific models of research and representation: Charles Gaines, Erick Meyenberg, Erick Beltran, and Jorge Satorre. They merge scientific means of visual encoding, such as diagrams and 2D and 3D data visualization models, with artistic forms of abstract representation derived from Minimalist sculpture and from the paired down aesthetics of Conceptual art. 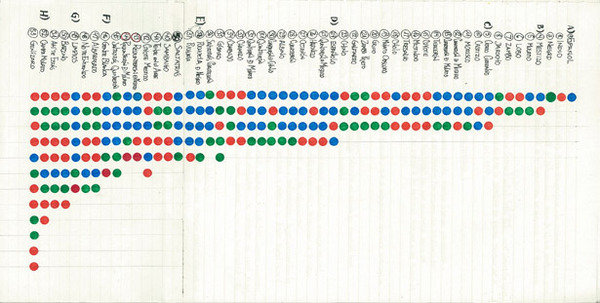 Prior to the opening, participating artists will provide a preview into their process in two artists talks. On February 8, Mexican artist Erick Meyenberg will give a presentation of his work at 6:30pm in Warren Lecture Hall Room 2001. And on February 15, conceptual artist Charles Gaines will engage in conversation with Dr. Rafael Núñez, Associate Professor in the department of Cognitive Science at UCSD, at 6:30pm in the Warren Lecture Hall Room 2001. Please see Upcoming Talks and Events for further information.

The word ANOMALIA is the Latin root for anomaly and refers to a deviation from the norm. The title references the oppositional intersection between art's subjective and speculative methodologies and the empirical analysis and objective systems of knowledge required of the sciences. The relationship between art and science have been studied and explored in various ways for decades, and recent discussion has specially focused on positioning art practice itself as a form of scientific research. In contrast, ANOMALIA takes a new approach by closely investigating diagrammatic and systematic forms of representation that reveal the constructed nature of both art and science and their mutual investment in the notion of the sublime.

The celebrated conceptual artist and CalArts professor Charles Gaines is featured in the exhibition and his work provides an important theoretical and historical context to the younger artists. The exhibition presents two bodies of work Gaines created in the early 1980s, Landscape: Assorted Trees with Regressions (1981), and Numbers & Trees V (1989). These series investigate the role that systems play in the creation of form and of aesthetic phenomena. Implicit to them is a questioning of the means by which images are read, understood and experienced. By responding to a predetermined numerical structure, rather than to his own subjective desires and needs, the artist proposes that concepts such as beauty and order are learned rather than implicit to the artistic object.

Utilizing LED lights, music and physical space, Erick Meyenberg presents a four-dimensional diagram of the genetic coding of Mexicans, from the Colonial period through today. Using 22 individuals as subjects, Meyenberg calculated the percentage of indigenous, white, and black blood in each individual to create a three-dimensional genetic diagram. By plotting these findings the artist generates an immersive colored light and sound installation that is a symbolic reflection of the socio-economical structure that prevails in Mexico and other countries. The artist has made a new site-conditioned version of Étude taxonomique-comparative entre les Castes de la Nouvelle Espagne et celles du Mexique Contemporain in response to the interior architecture of the UAG.

Shifting to cognitive science and its history, Beltrán and Satorre work collaboratively on a long-term project titled Modeling Standard that takes as a departure point the theory of the "Standard Model" in particle Physics that states that everything is made of twelve fundamental particles. Beltrán and Satorre appropriate this model to create a subjective, multi-narrative, illustrated micro-history that presents key moments and characters from cognitive science, psychoanalysis, art history and literature, including Carlo Ginzburg and Fantomas, among many others. ANOMALIA features new material created in response to a special interview between the artists and renowned UCSD neuroscientist Vilayanur Subramanian Ramachandran, the Director of the Center for Brain and Cognition at UCSD.

ANOMALIA features four contemporary artists whose work is fueled by concepts derived from scientific research and who utilize scientific representations and conventions in their work, but remain embedded in aesthetic phenomenology. The exhibition suggests that by bringing together science with aesthetics, both orders are interrupted. Accordingly, the exhibit both questions scientific positivism and exposes the conceptual underpinnings of aesthetic rapture.

About the Curator:
Lucía Sanromán is an independent curator and writer. From 2006 to 2011, she served as Associate Curator at the Museum of Contemporary Art San Diego, where she most recently curated Jennifer Steinkamp: Madame Curie (2011),Viva La Revolución: A Dialogue With The Urban Landscape (co-curated with Pedro Alonzo in 2010), and Here Not There: San Diego Art Now (2010). She also curated a large-scale site-specific installation by Los Angeles based artist Ruben Ochoa (2010) as well as monographic exhibitions by James Drake, Yvonne Venegas, Brian Ulrich, Hector Zamora, Peter Simensky Joshua Mosley, and Nina Katchadourian among others. Recent projects include Proyecto Coyote for Encuentro Internacional de Medellin 2011 (MDE11), and the edition of the monograph Marcos Ramírez ERRE for the Instituto Nacional de Bellas Artes, Mexico.

Charles Gaines (b. 1944, Charleston, South Carolina) is a conceptual artist who investigates systems, cognition and language. Prior to 1990, his work primarily explored the role systems play in the construction of forms and objects. Since 1995, his interests have shifted from numerical systems and progressions to language. Combining photographic images and photo-realistic drawings with text, this more recent interest focuses on the sublime, metaphor, and metonymy. He often appropriates and remixes literary sources with images or music to challenge conventional ideas about the nature of aesthetics and its attachment to affect.

Over the course of his career, Gaines has had over 60 solo exhibitions and several hundred group exhibitions in the United States and Europe. His recent exhibitions include All Of This And Nothing and Now Dig This! Art and Black Los Angeles 1960-1980, both organized by the Hammer Museum; State of Mind/Art from California circa 1970 at the Berkeley Art Museum and Orange County Museum of Art; Under The Big Black Sun: 1974-1981 at the Museum of Contemporary Art, Los Angeles; Dance / Draw at the Institute of Contemporary Art, Boston; and Human Nature at the Los Angeles County Museum of Art. In addition, Gaines has been featured in the Venice Biennale, the Triennale der Photographie, and the Whitney Biennial. His work is included in the collections of the Museum of Contemporary Art, Los Angeles; the Museum of Modern Art, New York; the Whitney Museum, New York; the Los Angeles County Museum of Art, Los Angeles; the Studio Museum in Harlem, New York; and the San Diego Museum of Art, San Diego, among many others. Gaines received his BA from Jersey City State University and his MFA from the Rochester Institute of Technology. He taught at California State University, Fresno from 1967 to 1989; since 1989 he has been on the faculty of the California Institute of the Arts where he has critically influenced several generations of California artists. He lives and works in Los Angeles.

Erick Beltrán (b. 1974, Mexico City) is a conceptual artist whose work reflects upon the structural mechanisms of systems, particularly those that dictate the production of political, economic, and cultural discourses in contemporary society. His projects often mimic the conceptual model offered by collecting and classificatory institutions such as the museum, the archive, or the library. Creating charts, diagrams, archives, information compilations, and media inserts, Beltrán analyzes the ways in which categorization and structural systems affect how value is assigned to images and objects, groups and individuals.

Beltrán has exhibited widely in both solo and group exhibitions. His recent exhibitions include Modeling Standard with Jorge Satorre at LISTE 16, Basel, Joan Prats Gallery, Barcelona, and Casa Vecina, Mexico City; Itinerarios 2009/2010 at the Botín Foundation, Santander; and Songs of the Swamp at Kunsthalle Exnergasse, Vienna. He has been featured in the Biennale de Lyon, Manifesta, the Trienal Poligráfica de San Juan, SITE Santa Fe, and the Bienal de São Paulo. His work is included in the collections of the Bibliothèque nationale de France, Paris; Museo Reina Sofia, Madrid; Colección Jumex, Ecatepec, Mexico; and the Osaka Contemporary Art Center, Osaka, among others. Beltrán received a BA in Visual Arts from the National School of Fine Arts at the Universidad Nacional Autónoma de México in Mexico City and has participated in numerous residences around the world, including Rijksakademie van beeldende kunsten, Amsterdam. He lives and works in Barcelona.

Erick Meyenberg (b. 1980, Mexico City) is an installation and performance artist whose most recent work utilizes ethnographic data research and an empirical methodology to reflect on historic and current sociopolitical/economic structures at play in Mexico and other countries. Frequently creating site-specific works, Meyenberg has been included in solo and group exhibitions in Austria, Canada, Germany, Japan, Mexico, Poland, Spain, and the United States. His recent projects include a site-specific sound installation at the Monument for the Mexican Revolution as part of the exhibition Dreams of the Nation: A Year Later, 2011 at the Museo Nacional de Arte, Mexico City. He received a BA in Visual Arts from the National School of Fine Arts at the Universidad Nacional Autónoma de México in Mexico City and was a guest student of German artist Rebecca Horn at the Universität der Künste, Berlin. He lives and works in Mexico City and Berlin.

Jorge Satorre (b. 1979, Mexico City) began his creative career as an editorial illustrator; his work, primarily drawing, film and performance-based, is informed by this background. Often purposefully distorting the relations between author/artist, narrative, image and reader/viewer typical to that field, Satorre's projects operate as a suggestion of an event, rather than as accurate documentation. Referencing both historical inquiry and revisionism, as well as personal experience, cinema, absurdist literature, and art history, he exploits the possibilities of drawing as narrative document and as tool for the recovery of memory.

Satorre has been included in many solo and group exhibitions around the world. His recent exhibitions include Modeling Standard with Erick Beltrán at LISTE 16, Basel; the Joan Prats Gallery, Barcelona; and Casa Vecina, Mexico City; Resisting the Present at Museo Amparo, Puebla, Mexico; and In Transit at the Musee d'Art Moderne de la Ville de Paris. He studied Graphic Communication at the Universidad Autónoma Metropolitana – Azcapotzalco in Mexico City and has participated in numerous artist residences, including Le Pavillon at the Palais de Tokyo, Paris; Hangar, Barcelona; and the Artist Residency Program at the Irish Museum of Modern Art, Dublin. He lives and works in Mexico City and Barcelona.