The exhibition deals with the utopian ideal of the 'New man' and its history in the 20 century. In the oeuvre of the three painters featured in this exhibition - Ferdinand Hodler, Aleksandr Dejneka and Neo Rauch - the radical transformation of this ideal can be observed in exemplary fashion. 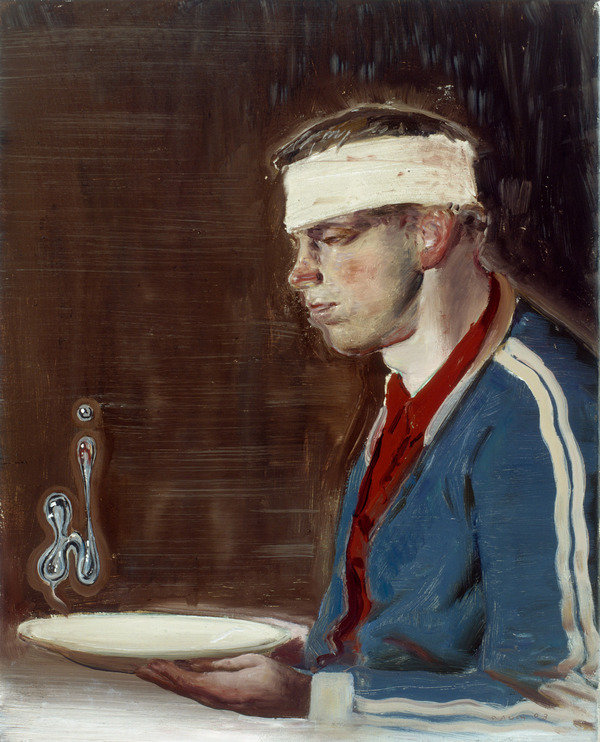 The exhibition Müde Helden (Exhausted Heroes). Ferdinand Hodler – Aleksandr Dejneka – Neo Rauch deals with the utopian ideal of the ‘Neue Mensch’ (‘new man’) and its history in the 20 century. In the oeuvre of the three painters featured in this exhibition, the radical transformation of this ideal can be observed in exemplary fashion. It starts with the proclamation of the ‘new man’ at the beginning of the 20 century, leads on to the political appropriation of the ideal in the vision of a socialist order, and ulti- mately draws to a close with the abandonment of all idealism after the end of Communist rule in the East Bloc in the late 1980s.

The art of the Swiss painter Ferdinand Hodler (1853–1918) is deeply rooted in the ideals of the ‘life reform’ movement. The discourses of a ‘new man’ that featured so prominently, and with great pathos, in the Lebensreform movement naturally found their way into his paintings. Despite their monumental appearance, his large-scale renditions of both female and male figures are marked by a measure of decoration and affectation. To the degree that Hodler subdued the heroism of his figures, they are here presented as tired, or ‘exhausted heroes’.

Kursk-born painter Aleksandr Dejneka (1899-1969), was a leading representative of post- revolutionary painting in Russia between 1918, the year of Hodler’s death, and 1932, when Socialist Realism was proclaimed as the official art of the Soviet Union. In his subject matter, in the painterly modeling of his figures, and in their gestures and posture, Dejneka closely appropriates the model of Hodler’s figural compositions and relocates them in a post-revolutionary Russian context – a process that has hitherto gone unnoticed. In this way, for instance, Dejneka transforms Hodler’s blossoming nature into an industrial landscape under construction. His working women and men appear like a renewal of the Swiss painter’s symbolist works in proletarian guise.

After the fall of the Berlin wall in 1989, the painter Neo Rauch (*1960), who grew up and was edu- cated in East-Germany, takes up exactly the type of figure developed by Hodler and Dejneka. In con- scious reference to the heroes of technology and industry from the ‘Twenties and ‘Thirties, Rauch’s figures are frozen in meaningless postures, performing inhibited actions and quixotic rituals in late industrial settings. The utopian vision of a ‘new man’ is here turned into a complete denial of any faith in progress or ideology of any kind.

In the exhibition Müde Helden the oeuvre of Neo Rauch, the internationally renowned representative of the ‘Leipzig School’ of painting, is for the first time presented in a historical and an art-historical per- spective. Moreover, the exhibition offers a singular opportunity to discover the oeuvre of Aleksandr Dejneka, a painter very highly-esteemed in Russia, who is represented by a large number of important works that have never before been shown in Germany. In thematically ordered references to the large number of works by their modern predecessor, Ferdinand Hodler, the exhibition presents a historical development from the ‘New Man’ around 1900 to the contemporary figure of a ‘Tired Hero’. The exhibition comprises more than a hundred large-scale paintings as well as prints and drawings. Curators: Prof. Dr. Hubertus Gaßner, Dr. Daniel Koep und Dr. des. Markus Bertsch