The Persistence of Geometry

The exhibition shows the use of geometrical shapes in the art of the last few decades from a selection of 96 works by 31 artists from the MACBA and "la Caixa" Foundation collections. Among the artists: Eleanor Antin, Donald Judd, Richard Long, Ettore Spalletti, Francesc Torres, Gordon Matta-Clark, Mario Merz, Rachel Whiteread... 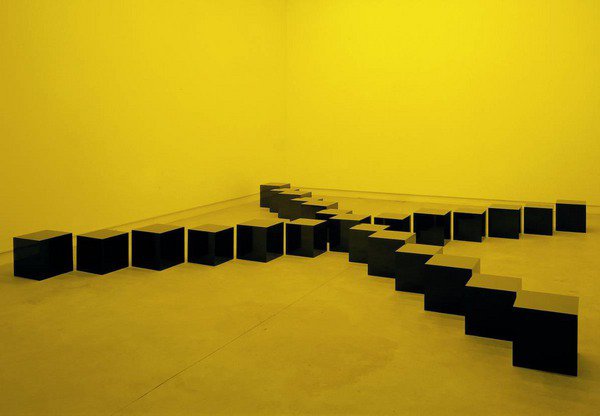 Throughout the 20th century, geometry was an inseparable companion of avantgarde art. Whether promoting an ideal of purity, silencing anything alien to its shapes or speaking of the world once again, geometry provided formalisations for a broad spectrum of artistic practices. The Persistence of Geometry shows the use of geometrical shapes in the art of the last few decades from a selection of 96 works by 31 artists from the MACBA and ”la Caixa” Foundation collections.

This is the second of a series of major exhibitions organised from works belonging to the two institutions with the aim of suggesting different readings of the 5,500 that make up the new collection. After the presentation of Volume! at the Museu d’Art Contemporani de Barcelona (MACBA) last November there will be new selections at the Bilbao Guggenheim and CaixaForum Palma and a tour of the continent of Asia. The Persistence of Geometry includes works by Donald Judd, Bruce Nauman, James Turrell, Robert Smithson, Gordon Matta-Clark, Matt Mullican, Richard Long, Francesc Torres, Àngels Ribé, Jordi Colomer, León Ferrari, Damián Ortega, Rodney Graham, James Lee Byars, David Maljković, José Dávila and Ettore Spalletti, among others.

This is the second exhibition —and the first in Madrid— to come from the cooperation agreement signed in July 2010 between Isidro Fainé, president of ”la Caixa” and ”la Caixa” Foundation, and Leopoldo Rodés, president of the MACBA Foundation, which was later extended at the MACBA Consortium. The agreement involves the joint management of the two contemporary art collections. The new collection created from the two original ones brings together a total of 5,500 works and is one of the largest in Spain and Southern Europe covering the period between the second half of the 20th century and the present day. The ultimate goal of this union is to enable people to become more aware of and better informed about the latest art by making the new collection and its actions better known on the international contemporary art scene. ”la Caixa” Foundation and MACBA exhibitions suggest associations between works from different times and cultural contexts, according to aspects of form and subject that connect with present day artistic concerns. The first three overlap in time: Volume!, inaugurated last November at the Museu d’Art Contemporani de Barcelona; The Persistence of Geometry, at CaixaForum Madrid, and The Mirror Reversed, which will open its doors at the end of January at the Bilbao Guggenheim.

In November 2012, CaixaForum Palma will be offering a fourth look at the two collections. At the same time, from next autumn the exhibition The turn of the century in contemporary Spanish art will begin a two-year tour of Asia, visiting cities in China, Japan, Malaysia and the Philippines, thanks to an agreement with Acción Cultural Española (AC/E).

Geometrical shapes, omnipresent in 20th century art The Persistence of Geometry is a journey around ”la Caixa” Foundation and MACBA collections which starts from the recurrent appearance of geometry in sculpture and installation, from the sixties to our day. It shows a break with traditional forms and a redefinition of the work of art which, through the experience of shape and space, seeks the active participation of the spectators. In all periods of history geometry has been a symbol of purity, intelligence and perfection. In Ancient Greece, it was the object of a metaphysical idealism and was identified with notions of perfection, beauty, reason and balance. Its legacy in Western culture has been an inexhaustible source of inspiration, and it has been attributed functions that are not only scientific and cosmological, but also aesthetic and mystical. Today it conditions the whole of our lives, in both the physical reality of urban space and industrial products and the screens that transport us to the virtual world of cyberspace.

Geometry has always been present in art, though it was not until the 20th century that its use was extensively theorised. In the first decades of the last century it was linked to the concepts of abstraction and modernity and was a vehicle for idealisms and utopias. Using it made it easier to move away from a representation of reality and fuelled the aspiration to create a new visual language that would embody the ideas of purity and perfection. The Persistence of Geometry travels the road that began in the sixties and seventies, when Minimalism, post-Minimalism and Conceptual Art were forged. Their makers stripped abstract art of symbolic contents and used it as a pure principle of composition. Art was reduced to the elemental shapes and shifted its meaning outside the object until it became an experience that depended on the properties of the environment and interaction with the spectator.

In the seventies the concept of sculpture was at a crossroads. As a consequence of the proliferation of ideas that blurred the boundaries between the arts, the geometrical shapes of Minimalist sculpture were extended to other practices —which included installation, film, video and photography— with which different aspects of the construction of the work of art were explored: performance, process, the properties of light and the temporal nature of perception.

In recent years, artists of the new generations have returned to geometry to explore the use made of it by earlier tendencies. And so geometrical shapes have persisted in art with different sensibilities, narratives and styles. These new generations are united in their aim to review cultural issues. In their works geometry once again draws on content to convey poetic, personal or political meanings, abandoning the concept of abstraction.

Areas of the exhibition
The metaphysics of geometry. James Lee Byars
Three geometrical figures —a sphere, a cube and a parallelepiped— are shown enclosed in three glass cases. With his poetic ingenuity, Lee Byars enclosed these primal shapes in museum display cases, as if he wanted to safeguard the imagination of an absolute, immutable purity for eternity and protect it from the incapacity of our culture to sustain universally valid truths for a longer time.

Essential shapes. Hans Haacke, Donald Judd, Richard Long, James Turrell
“What you see is what you see”, said Frank Stella, one of the leading artists of Minimalism, in 1966. From an essential vocabulary of basic and abstract shapes, the movement avoided symbolism and silenced the artist’s emotional expression. Stella’s words draw our attention to the physical essence of works in which there are only references to their own materialness and geometry. Sculpture dispenses with the pedestal and establishes a new relation with the spectator, who can see it as a real object in a specific time and space.

Geometry in action. Eleanor Antin, Bruce Nauman, Josep Ponsati, Carles Pujol, Àngels Ribé, Robert Smithson, Francesc Torres
These artists have generated figures that grow and develop in space, understanding geometry as something living and in constant transformation. By creating new shapes or making existing ones visible, they seek the presence of geometry in an environment outside the museum, and do so through the body or its interaction with space. The ephemeral nature of their interventions makes photography or video the best way of recording both the artist’s experience and the work itself. Because it evolves in time it can no longer be explained by a single image.

Drawing in space. Armando Andrade Tudela, Waltercio Caldas, León Ferrari, Gego, Mario Merz
A line grows and is combined with others to form more complex systems: nets, meshes or grids. In these works the line becomes a basic unit from which new structures can be created: from free shapes that abandon the exactitude of pure geometry and conjure up nature itself to systems that remind us of the composition of our cities. Drawn in the air or on paper, the fruit of an ordered growth or a random development, these shapes have invaded and organised space, giving rise to balanced systems. In that way fullness and emptiness combine in transparent, ethereal structures that have lost the hardness of their essential unity.

Poetic geometry. Ettore Spalletti
Spalletti uses simple monochrome shapes that recall moments of the history of art which have been his reference points. For him abstraction does not mean a rejection of tradition or the place it comes from, but the possibility of approaching ideals of order and perfection from the basic components of painting: colour, pure form, light and texture, in his case the fruit of the use of powdered pigments. In this installation, the harmony of geometrical shapes and the atmosphere created by the colour envelop us in an feeling of lightness and calm which is conducive to contemplation.

Minimalisms in expansion. Absalon, Sergi Aguilar, Txomin Badiola, Jordi Colomer, José Dávila, Rodney Graham, Pello Irazu, Rachel Whiteread Through the use of simple geometrical shapes and modular repetitions, these artists appropriate the forms of Minimalism and endow them with new content. Geometry is no longer abstract. The works remind us of objects which, though rendered useless, overflow with references to our world. Although some artists emphasise formal speculation, most propose a dialogue with the everyday object which, critically or ironically, explores the way in which we construct and inhabit our life spaces.

Geometrical strategies. Damián Ortega
If geometrical shapes were conceived as abstractions disconnected from any time and place, how can we interpret them when they appear in a context as specific as the periphery of a city? Damián Ortega disconnects them from idealism and turns them into the central figures of a narration. Starting from the manoeuvres described in The Art of War —a Chinese treaty on military strategy from the 6th century BC— Ortega represents metaphorically, from the geometrical shapes of a brick, the depersonalisation of the subject in a systematic organisation. With this staging the subjects’ loss of identity is represented by geometry: the shape of the group predominates over that of the basic unit that generates it. In this way he reveals the fragility of these apparently solid systems: the fall of a single module brings the whole thing tumbling down.

Intersections in architecture. Dan Graham, David Maljković, Gordon Matta- Clark, Matt Mullican
These artists explore geometry through architecture and the role it plays in the organisation of spaces, both private and public. From this starting point there are different approaches to the idea of border: the kind that separates the intimate from the shared, the kind that marks out our movements in an organised space or, in totalitarian systems, the kind that distances official history from forgotten stories. And so Gordon Matta-Clark, Dan Graham, Matt Mullican and David Maljković show us, from different perspectives, that architecture and the limits it establishes are a reflection of the social relations that occur in a particular historical context and space.