I'm Mortality. For this exhibitions the artist draws on the indigenous traditions of shape-shifting and reincarnation encountered during trips to Nepal: a practice born at an intersection of Mortality and Immortality as experienced as biology and as consciousness. 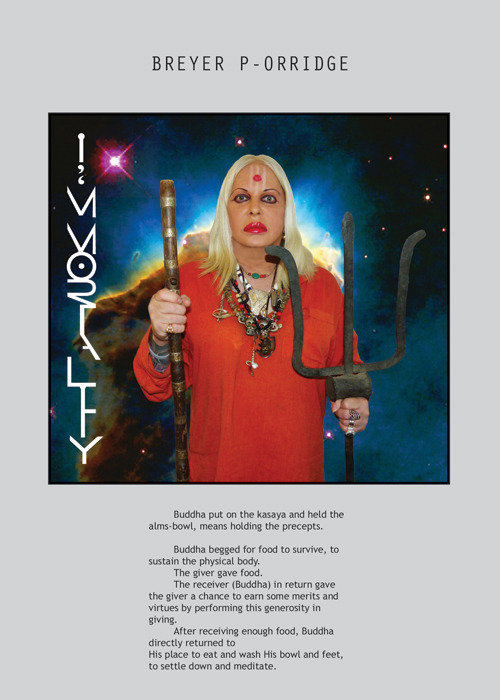 Genesis BREYER P-ORRIDGE is one of the most rigorous and relentless agents of the postwar Anglo-American vanguard, interrogating the meaning and substance of identity in a peerless half-century program of willful reincarnation and shape-shifting. Embracing the body as not simply the vessel but the site of the avant-garde impulse, BREYER P-ORRIDGE has reinvented and reintroduced herself again and again—as Fluxus pioneer, groundbreaking performance artist, inventor of industrial music, "wrecker of civilization," and, most recently, as pandrogyne, in a romantic project of identity and gender merging with her now-late wife, Lady Jaye. In her new body of work, conceived to be a kind of “inter-dimensional” collaboration between the material and the immaterial world, BREYER P-ORRIDGE probes the limits of each of those enterprises, drawing on the consonant and indigenous traditions of shape-shifting and reincarnation encountered during recent trips to Nepal: a practice born at an intersection of Mortality and Immortality as experienced as biology and as consciousness.

"We view Breyer P-Orridge as a separate person who is both of us, Neither of us take credit for the work, the work is a melding of both of our ideas which we would not have had singly. Both of us are in all of our art. That third being, Breyer P-Orridge, is always present." —LADY JAYE, 2003