Considered one of the preeminent contemporary Abstract painters, Heilmann's practice overlays the analytical geometries of Minimalism with the spontaneous ethos of the Beat Generation and the influences of American pop culture. In his paintings, Raedecker depicts abstracted scenes of suburban architecture and everyday domestic life. However, instead of using a brush to paint his subject matter, he uses a needle to painstakingly delineate every scene with stitched threads. 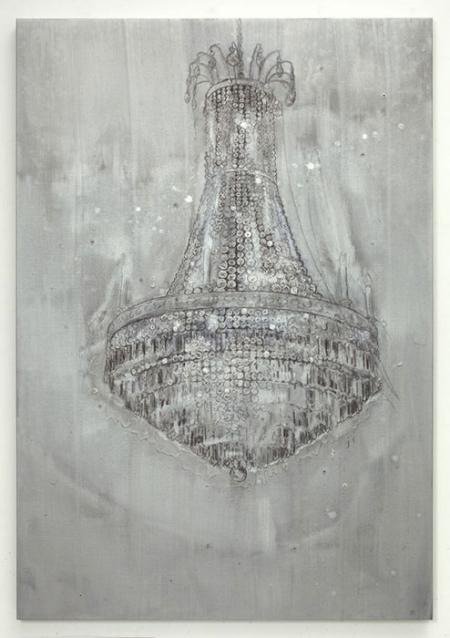 Considered one of the preeminent contemporary Abstract painters, Heilmann's practice overlays the analytical geometries of Minimalism with the spontaneous ethos of the Beat Generation and the influences of American pop culture. For her exhibition, 'Visions, Waves and Roads' in the South Gallery of Hauser & Wirth London, Savile Row, Heilmann presents a large group of new paintings as well as ceramic sculpture and her distinctive furniture.

Heilmann's paintings such as 'Road Trip' and 'Crashing Wave' are a vibrant retelling of the artist's ongoing life story. These works recall long cross-country road trips or the wild blue and green tones of waves breaking on the shore. They take their inspiration from scenic highways and ocean vistas of the California West coast, Montauk in New York, the north shore of Hawaii, even Mandaka in Spain. Heilmann also pays tribute to the great Modernist master Kazimir Malevich in several paintings. In 'Malevich Spin', she notes his stark Suprematism, quoting his 'Suprematism, 18th Construction' from 1915.

Installed alongside Heilmann's paintings is a group of ceramic tiles dotting the gallery walls. These tiles not only mimic the colour palette of the paintings that they accompany, but also highlight their physical properties – from the drips of paint to the sculptural shapes of her canvasses.

Heilmann once explained, 'Each time I do a show, or am in a group show, I think of it as one installation piece. I think of the people who come to see the work as part of a picture, part of a story. My paintings and sculptures can be seen as representations of thoughts and ideas. I like to scan my eyes around the room and read the show like a storyboard. And I hope my visitors do that too' (Artist's Statement for the Whitechapel Gallery, 2009). To achieve this, she began to include chairs of her own design as part of her installations so that people would stay longer.

For many years, Mary Heilmann has played an influential role for generations of young artists not only through her practice, but also through her teaching and lectures. She was born in San Francisco CA in 1940. Following her studies at the University of California at Santa Barbara and Berkeley, Heilmann moved to New York City where she immersed herself in the contemporary art scene. Heilmann lives and works in New York and Bridgehampton, Long Island.

Hauser & Wirth is delighted to present an exhibition of new works by Michael Raedecker in the North Gallery of Savile Row. Best known for his subtle and unsettling, enigmatic works combining muted tones of paint and embroidery, Raedecker's paintings explore and push the boundaries of his medium. He goes beyond conventional methods of representing formal elements such as texture and perspective. Through his layering of thread, paint and small, yet aggressive punctures to his canvas, Raedecker imparts an unexpected physicality to his two-dimensional works.

In his paintings, Raedecker depicts abstracted scenes of suburban architecture and everyday domestic life. However, instead of using a brush to paint his subject matter, he uses a needle to painstakingly delineate every scene with stitched threads. In Raedecker's new paintings created especially for his exhibition with Hauser & Wirth, he further explores the combination of the art of painting with the craft of embroidery by stitching his painted canvases together. For instance, in one work Raedecker presents a row of bungalows stitched into a large canvas. The canvas is then cut into vertical rectangular strips, rearranged and stitched back together. By literally going through the canvas and deleting fragments, these cuts act as an editing process, which further disorientates what began as an already disconcerting scene of suburban life.

Raedecker uses silver paint and thread for the first time in his new paintings. The inclusion of this non-colour takes his overtly grey palette in a previously unexplored direction. Initially, these paintings appear to possess a cold exterior, devoid of emotion; however, on closer inspection, the silver brings to life the painting's hidden details. For Raedecker, silver possesses connotations of modernism and technology, which sit uneasily with the craft and traditional elements at the root of his practice.

Raedecker's subject matter ranges from urban settings and wedding cakes to chandeliers and curtains – items recognisable to every viewer. Despite the familiarity of their subject matter, the paintings do not refer to a traditional theme or genre, but rather their multiple layers of meaning elude a conclusive reading.