Goetschalckx's work is a combination of videos, objects and performances in a sculptural setting which are occupied, explored and transformed by his interventions. Fink has been working on his 'Atlas of Movements' for many years, exploring the borders of the human body and its interaction with its surroundings. 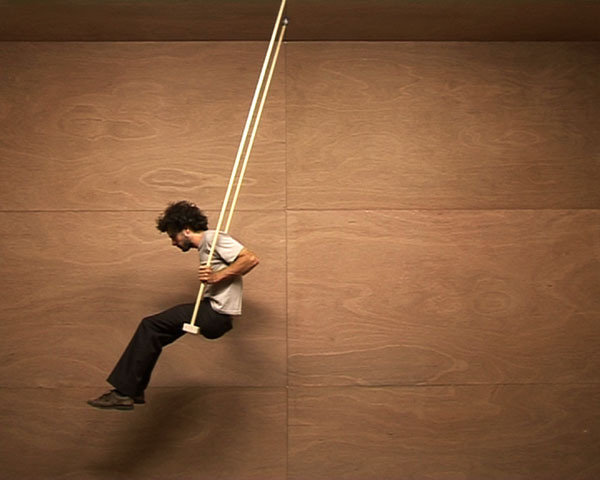 In his work Wannes Goetschalckx (°1976, Zoersel) investigates the emotional versus the physical, or the ideological and the hypothetical in relation to the body and space. His oeuvre is a combination of videos, objects and performances in a sculptural setting which are occupied, explored and transformed by his interventions. In his performative installations, the limitations and possibilities of his body, hand-made objects and his own specific visual language play an important role. By imposing physical and mental challenges on his body and mind, he makes us think about our behaviour and place in the world.

On show in Belgium for the first time is Goetschalckx’ video installation 1 WITHOUT, which he made for the Liverpool Biennial in 2010. The installation consists of eleven monitors on plinths spread out over the gallery. In the videos the artist performs everyday actions and rituals like walking, counting, whistling, eating, drinking, sleeping, bathing and moving to and fro on a swing, all in hermetic isolation in an enclosed space. These actions make us stop and think about the patterns and habits we develop in our daily lives and about their wearying repetitiveness.

Another recent work by Wannes Goetschalckx on show at M is Toothpick made during his residency at the Casino Luxemburg in the autumn of 2011. The starting point for this project was a 14-metre-high poplar tree from which he cut a toothpick with his own hands, layer by layer and without resorting to industrial equipment. This physically demanding and time-consuming task highlights the artist’s respect for the majestic powers of nature. M is showing the end result, i.e. the toothpick and the video documenting the process, alongside other work, including new work the artist has made specially for M.

Wannes Goetschalckx will be at the M in person every Sunday.

Christoph Fink (Ghent, °1963) has been working on his 'Atlas of Movements’ for many years, exploring the borders of the human body and its interaction with its surroundings. This takes the form of detailed accounts of his travels, photographs, sound recordings, etc. which the artist then turns into experimental exhibitions such as space-filling cartographic and acoustic constructions consisting of drawings, diagrams, tables and layers of sound. Fink thus presents an alternative world view in which he calls into question the relationship between the various elements around us.

The exhibition is being mounted in association with the K.U.Leuven to mark the anniversary of Mercator’s birth (1512-1594). The Arenberg campus library is drawing on its own collections to show twenty maps dating from the seventeenth century to the present day.

A joint M and K.U.Leuven Arts Commission initiative in cooperation with Christoph Fink.