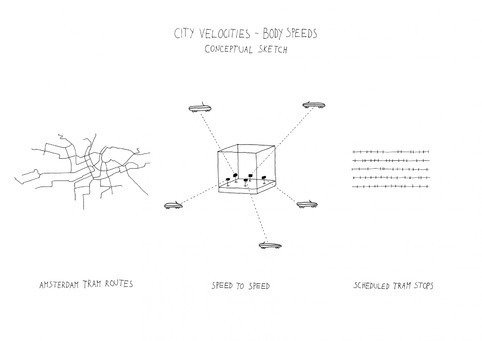 The exhibition at NIMk presents several installations, sound- and film works that explore different modalities of time. They seemingly halt the experience of time, deal with speed in the city, resist the sequential montage of classic cinema, or leave the visitor in suspension because action is continuously deferred. Immersive, pensive, scientifically precise or overwhelming, all these works tickle the brain and the senses.

The exhibition officially opens 23 February at 16:00, and will include public interviews with three of the featured artists: Daïchi Saïto, Juliana Borinski and Julien Maire.

NIMk, Sonic Acts and STEIM are proud to announce the new joint Artist in Residence project City Velocities – Body Speed by Tao G. Vrhovec Sambolec. The installation will be presented as part of the Sonic Acts – Travelling Time exhibition at NIMk from Februari 23 – April 15, 2012.

City Velocities - Body Speeds is a project focusing on tactile experience of travel speed in urban environment. In the time of digital mediation and visualization of all real and physical, the project insists on the conviction to offer a first person physical experience of an omnipresent but invisible phenomena of speed. Resisting to offer an interpretation, it rather embodies the phenomena - creating the experience and thus confronting the visitor with its existence.

The project is supported by the Mondriaan Fund

EMBODYING THE DIMENSION OF SPEED
Trams, velocity meters, fans, wind, custom-made software.
When traversing the city by means of public transportation, we are sitting or standing still, but actually our bodies are moving. We inhabit a mobile public space and by that we also inhabit the invisible dimension of speed. At this moment, we are in a contradictory situation - still and passive, yet in motion. We perceive the passing cityscape as if it is moving in front of our eyes, and the only physical experience of the speed we are traveling with, is reduced to slight jerks and tilts of our bodies and to a mild sensation of the changing pressures in our stomachs. For the rest, the dimension of speed we inhabit remains imperceptible, which in turn obscures the perception of close relation and interdependence between movement, time and energy.

City Velocities - Body Speeds is a project focusing on this ambiguous moment. It aims to make the speed tangible in order to create a physical awareness of it.

Abstract and concrete at the same time, the installation mediates between physical travel movement and its lived experience, creating a heightened awareness of the existence of dimension of physical speed we inhabit, and thus enhancing and articulating its presence in contemporary city.

In its first version, the project involves measuring velocities of several trams in Amsterdam, streaming the data to the exhibition space in real time and recreating them by several powerful fans. By focusing on tram transport, which is seen as being at the intersection between planed schedules and spontaneous unpredictabilities of the street life, the installation uncovers a particular dynamics of lived intensity of a city as an organism.

Titled Travelling Time, this year’s festival offers an intense experience of time and explores radical ideas relating to time. Time is a complex and ambiguous concept. Ongoing technological developments continually change our notions of time. Communication networks operate at light speed and computers process data in real time without human mediation, resulting in a gap between machine time and the human experience of it. Music and the other arts enable us to investigate the nature of time by making the concept tangible, and by changing or intensifying our experience of time. Art is a time machine. Sonic Acts XIV is a journey through time.

TAO G. VRHOVEC SAMBOLEC BIOGRAPHY:
Tao G. Vrhovec Sambolec (SI/NL) is an artist and musician based in Amsterdam working with invisible ephemeral phenomena and the notion of space. His artistic practice is a poetic exploration of relationships between transitory and temporal flows like sound and weather phenomena and architectural and social spaces they inhabit.

In his installations, he makes architecture sensitive to its immediate ephemeral surroundings and enhances the temporal dimension of architecture by creating situations where the outside and inside, the unpredictable and constructed, the permanent and temporal, time and space converse.

During the Sonic Acts exhibition Traveling Time, special selected works for this theme will be screened on Platform 2.