Ephemeral art in dialogue with the collection. Light and video art, installations and artistic interventions commentate on and mirror the permanent exhibits with media that are directed at the sensory perception. 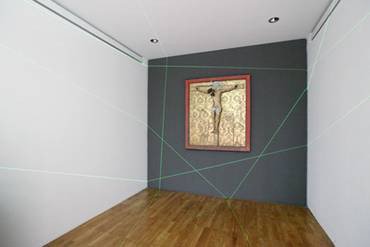 Temporary, momentary, transient. With 'ephemeral' works, the exhibition EPHEMERALS initiates a dialogue between contemporary art and historical collection. Light and video art, installations and artistic interventions commentate on and mirror the permanent exhibits with media that are directed at the sensory perception. In these works specially devised and created for the situation in the Zeppelin Museum, the momentary – and hence the focus on the individual art experience – is mostly already anchored in the structure itself. The static and the dynamic, past and present, traditional and contemporary ways of seeing are thus brought into vibrant tension with each other. The viewer becomes an active part of a vivid discussion on the topics of temporality, impermanence and processuality.

The idea of the exhibition is based on the artistic research work on the subject of ephemerality in the Stuttgart off-space 'Tresor ─ space for ephemeral art'. Whereas a safe is normally used for storing material valuables – for example for art works while they appreciate in value – the safe room of the former Bahndirektion in Stuttgart provided for almost two years the framework for a programme that felt itself committed to the opposite: creating aesthetic experiences that can only be perceived at a given moment.

Thanks to the focus of the Zeppelin Museum, related themes play a role here: from the volatile gases necessary for the uplift of flying objects through the momentariness of travel experiences to the questions of impermanence in relation to accidents or uses for war. Moreover, the museum is situated directly by Lake Constance ─ in surroundings in which the ephemeral atmospheric conditions have influenced the life of people from time immemorial. For studying the phenomenon of ephemerality at a museum level, the location therefore seems doubly appropriate. As the 'ephemeral' works appear piece by piece in the collection rooms over a good two weeks and after a certain run disappear again one after the other, the exhibition is itself also subject to the principle of the ephemeral, thereby setting the Museum in a subtle process of transformation.