A major exhibition of rare vintage prints by Herbert G. Ponting, to coincide with the centenary of the death of Captain Robert Falcon Scott and the four members of the Polar Party of the British Antarctic Expedition of 1910-1913. 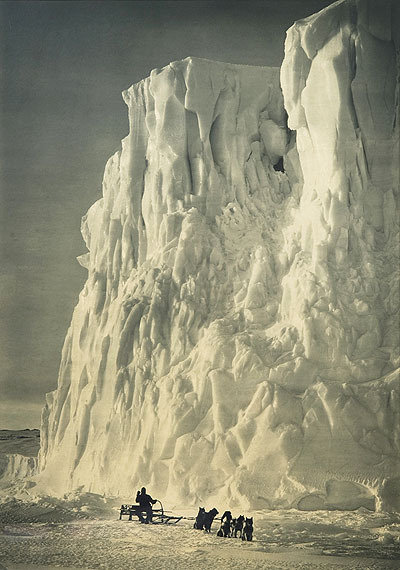 The British Antarctic (“Terra Nova”) Expedition remains imprinted in public consciousness as the venture in which Scott was beaten to the South Pole by the Norwegian Roald Amundsen, only to perish on the return journey along with four of his men. Focusing solely on the tragedy, however, is to overlook the great accomplishments of Scott’s expedition. These include the first winter sledging journey in Antarctica, the collection of unprecedented quantities of scientific samples and data and the surveying of previously unknown coastal and interior regions of the continent. Not least was the extraordinary visual record compiled by the official expedition photographer, or “Camera Artist”, Herbert Ponting.

Ponting was the very first professional still and movie photographer to go to a polar region and, almost certainly, the first movie cameraman to use his camera for naturalist studies. His extraordinary technical and compositional talents rise to the heights of true photographic greatness and he is justly regarded as one of the most important British photographers in the history of the medium. Despite this, his vintage carbon prints, originally produced for exhibitions sponsored by the Fine Art Society in 1913-14, are rare, particularly in fine contemporary condition. This exhibition will proudly offer the largest group of Ponting’s vintage carbon prints in outstanding condition since that first display in 1913. Among these works, many in their original Edwardian frames and redolent of the atmosphere of the times, include a majority of Ponting’s most iconic photographs. Alongside these are shown a new collection of 48 platinum prints, published in a special portfolio in association with the Scott Polar Research Institute, Cambridge. Handmade from Ponting’s original negatives, the prints are arranged thematically and accompanied by specially commissioned essays. They represent a unique and timely contribution to the presentation, preservation and contextualization of Ponting’s Antarctic work.

In addition to the work of Ponting, the exhibition includes the recently published and exhibited Lost Photographs of Captain Scott, taken by Scott during the expedition and the fateful march to the Pole. Throughout this journey, in the face of extreme climatic conditions and technical challenges, Scott—trained by Ponting himself – used a camera to capture breathtaking polar panoramas, geographical and geological scenes, and action photographs of the explorers and their animals, all remarkable for their technical skill as well as for their poignancy. Lost, fought over, neglected, then resurrected and finally exhibited for the first time at ATLAS Gallery in November 2011, Scott’s own photographs are a humbling testament to the last great expedition of the Heroic Age of Polar Exploration.