The exhibition 'All in Order, with Exceptions' is a retrospective of Nedko Solakov. The artist collected documentation of all the work he had created between 1980 and 2010 and gave the curators 'carte blanche' to select one work from each year for the exhibition. The 30 pieces selected form a quasi narrative, a sometimes deceptive, subjective passage through Solakov's life. 'Schaak show' by Sarah Ortmeyer, combines several sculptures in an installation focusing on the game of chess and powers of allurement. Part of the sculptures consists of Ortmeyer's own artist's publications. 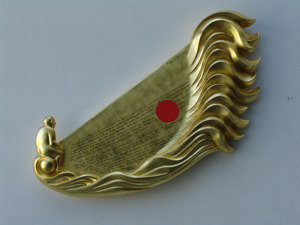 Nedko Solakov
All in Order, with Exceptions

Nedko Solakov (°1957, Cherven Briag) is one of Bulgaria’s internationally best known contemporary artists, and has been artistically active for more than thirty years. He studied traditional mural techniques at the Academy of Sofia, and since then has combined this classical background with a more conceptual practice and a strong sense of the absurd. His oeuvre includes paintings, drawings, installations, video, text and performance, and it plays with a wide range of references to art history and the world of art.

Solakov was a key figure in the Bulgarian art world in Sofia in the late 1980s, just before the fall of the communist regime. A turning point in the art of that period was the exhibition called ‘The City?’. Several local artists, including Solakov, together investigated new approaches to art and created works of art that cleverly formulated criticism of the then political and social system. Several of Solakov’s paintings at that time, some of which can be seen here, were regarded as very critical. In retrospect, these works, with their amusing, ironic self-mockery, are fully in line with Solakov’s artistic career so far. He has regularly thwarted the viewer’s expectations. In his occasionally deceptively simple stories and drawings, which often exude a slightly melancholy humour, he ridicules himself and his artisthood.

ALL IN ORDER, WITH EXCEPTIONS was developed in close collaboration with the S.M.A.K. (Ghent), Ikon Gallery (Birmingham), Museu Serralves (Porto) and Galleria Civica (Trento). A different version of the exhibition is shown at each venue. The exhibition the S.M.A.K. is the first ‘retrospective’ of Solakov’s work in Belgium. In the most literal sense of the word this retrospective spans a career of thirty years. The premise is deceptively simple: Solakov collected documentation of all the work he created between 1980 and 2010, and gave the curators of the various institutions carte blanche to select one work for each year. These thirty works form the basis of the exhibition and in turn Solakov himself adds those typically ironic and melancholy comments that appear so often in his work. Solakov distilled an extra exhibition called ‘All in (my) order, with exceptions’ from the works not included in the curator’s selection and put it on show at the Galleria Civica in Trento.

In THE FOLDERS (2011), the ‘31st’ work in the S.M.A.K. exhibition, Solakov comments on his thirty years of artistic practice in a third ‘communicative layer’. This work could be regarded as a kind of sculptural library, divided into three book-benches/bookcases each covering a decade, where Solakov, to his heart’s content, adds footnotes to his own artistic career.

The publication ALL IN ORDER, WITH EXCEPTIONS (Hatje Cantz, 2011) includes the selection of works in the exhibitions at the S.M.A.K. (Ghent), Ikon Gallery (Birmingham), Serralves (Porto) and Galleria Civica (Trento) and is available at the S.M.A.K. bookshop.

The FOLDERS can also be accessed online at www.nedkosolakov.net

SCHAAK SHOW at S.M.A.K. is the first Belgian solo presentation of work by Sarah Ortmeyer (°1980, Frankfurt am Main). The project was conceived specially for the Kunst Nu room and combines several sculptures in an installation focusing on the game of chess and powers of allurement. The sculptures are composed of chess boards and various materials – the base is always classical marble. Part of the sculptures consists of Ortmeyer’s own artist’s publications, GRANDMASTERS WORLDCHAMPIONS, with pin-up photos of half-naked female world champions and grandmasters of chess.

Ortmeyer’s work makes use of such varied icons as Yves Saint Laurent, the black market, the German reunification, Playboy, Mickey Mouse Magazine or Vogue, the French Resistance, the ocean, California, Immanuel Kant, Chanel, the Eiffel Tower, the Queen, Christmas, flora, the army, Shiloh Jolie-Pitt, sailor suits, the laurel wreath, marble sculptures or Karl Lagerfeld. In her article on Ortmeyer, Jenny Schlenzka notes an interesting parallel between Ortmeyer’s way of working and Claude Lévi- Strauss’ concept of ‘bricolage’. In his book ‘La Pensée Sauvage’ (1962) Lévi-Strauss cites a pure, untamed human notion which he links with the idea of ‘bricolage’. According to him, man constructs new structures in a closed world by means of tinkering, using a finite amount of material. Ortmeyer may do something similar in her oeuvre: she uses available signs, meanings and stories to compose new myths.

One of the important sources of inspiration in Ortmeyer’s oeuvre is the traditional power balance, both political and sexual. Her work is often based on a personal interest in the international political climate and traditional human relations, which together form a historical basis for contemporary thought. By deconstructing, re-assembling and reconfiguring image, word and classic materials she creates new arrangements that may bring unexpected mutual relations to the surface. In her wooden sculptural work SABOTAGE (2009) it’s possible that Ortmeyer turns the spotlight on relationships of economic power. This work consists of destroyed clogs that cover the floor. The probable etymological source of the word ‘sabotage’ is the French word ‘sabot’, which means clog, and is a reference to an uprising by French agricultural labourers, who protested against the mechanisation of their work and threw their clogs into the threshing machines. But above all SABOTAGE may shed light on the possibility of revolt. This is particularly true nowadays, when the enemy is difficult to detect and agricultural engines are transformed into invisible information and financial systems.

In LA LOVE (2008) Ortmeyer examines the myth of love. Using images from postcards, magazines, record sleeves, postage stamps or photos, she brings together lovers who might never have existed in reality. For example, she pairs Thomas Bernhard with Glenn Gould, Andreas Baader with the Velvet Underground singer Nico, and Barbra Streisand with the chess icon Bobby Fischer. A fake supplement for the gossip magazine GALA accompanied this work. KANT ELEGANT KALIFORNIA (2010) is a reference to Immanuel Kant’s unknown views on elegant clothing and style and may embody the perfect contemporary response to dandyism. Embroidering on Kant’s notion that ‘nature does not bring out what does not cater to the eyes’, Ortmeyer compiled three sculptures in which garments and colours by Giorgio Armani, Calvin Klein and Yves Saint Laurent are interwoven with indigenous Californian plants.

Ortmeyer’s work FAUST (2009) has been acquired for the S.M.A.K. collection.

A publication called GRANDMASTERS WORLDCHAMPIONS was made specifically for the SCHAAK SHOW installation and can also be purchased separately as an artist’s book.

S.M.A.K. Museum of Contemporary Art
Citadelpark, 9000 Ghent Belgium
Open Tuesday to Sunday, 10am to 6pm.
Closing time cash-desk: 30 minutes before closing of the museum
Entrance fees
€ 6: individual visitor
€ 4,5: groups from 15 persons, under-25s, over-60s, students
€ 1: young people under the age of 26
Free: for children up to and included the age of 18, disabled and persons accompanying groups.