This international, multigenerational group exhibition surveys over 90 works from the 1960s to the present by more than 50 artists, including Vija Celmins, Susan Collis, Keith Edmier, Fischli and Weiss, Robert Gober, Alex Hay, Kaz Oshiro, Charles Ray, and Ai Weiwei. A close examination of artworks based on commonplace objects and situations, which are startlingly realistic, often painstakingly rendered, and sometimes surreal. 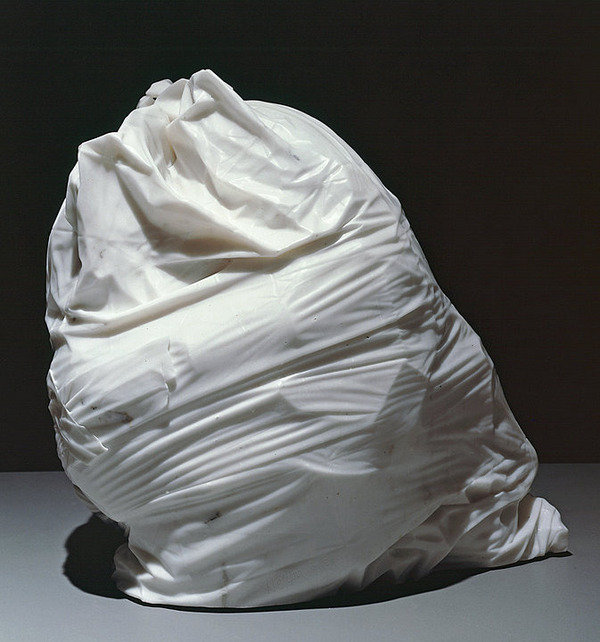 The exhibition Lifelike, on view at the Walker Art Center from February 25 to May 27, 2012, invites a close examination of artworks based on commonplace objects and situations, which are startlingly realistic, often painstakingly rendered, and sometimes surreal. This international, multigenerational group exhibition surveys over 90 works from the 1960s to the present by more than 50 artists, including Vija Celmins, Susan Collis, Keith Edmier, Fischli and Weiss, Robert Gober, Alex Hay, Kaz Oshiro, Charles Ray, and Ai Weiwei.

Lifelike examines a trajectory in art that began in the late 1960s, positioned between Pop and Photorealism, but aligned with neither. Avoiding Pop’s brandname flashiness and the slick urban scenes of the Photorealists, the artists in Lifelike investigate the quieter side of the quotidian, choosing potentially overlooked items or moments—a paper bag, an eraser, a waiting room, an afternoon nap—as subject matter. The works in the exhibition transform the ordinary into something beguiling, loaded with narrative and metaphor, and imbued with an arresting sense of humanity.

The exhibition explores the many ways artists have pursued handmade verisimilitude through a range of media, including painting, sculpture, photography, drawing, video, and three-dimensional environments. Some artists featured, such as Vija Celmins and Peter Rostovsky, paint from photographs, creating immersive surfaces that exhibit an astonishing degree of likeness and detail. Others work in sculpture, often fashioning their works from materials that belie the pedestrian nature of the subject—Ai Weiwei’s jar of hundreds of sunflower seeds, made from hand-painted cast porcelain, or the work of Yoshihiro Suda, who creates weeds that “grow” from the gallery floor, carved by hand from magnolia wood. In video, artists including Thomas Demand and Jeon Joonho create moving images that at first seem familiar, but deceive us through sly use of animation. In photography, artists including James Casebere and Isaac Layman play with the hyperreal, through fabricated scenes or clever layering of images.

Conspicuously absent in most of the works in Lifelike is a reliance on technological intervention. Instead, in seemingly inverse proportion to the ease of producing goods for the marketplace, many artists are slowing and complicating their own working methods, remaking banal things into objects of fixation and desire: Catherine Murphy’s details of textured fabric on the seat of a chair, or Ron Mueck’s strikingly “real” sculpture—down to the last hair and pore—of human subjects. Frequently these artists work from photographs, but just as often, their inspiration is the observed world, and the notion that a tangible, perhaps ephemeral object or moment can somehow be brought back to life—reinterpreted through the artist’s hand as re-made readymades.

To address the nuances of this subject, the exhibition presents several key conceptual sections. Common Objects gathers a group of late 1960s and early 1970s works that borrowed strategies from Pop, but rejected that movement’s brand-name emphasis in favor of conceptual, more process-oriented approaches to rendering their subject matter. Another section presents the notion of The Uncanny, which begins with work by a generation of artists in the 1980s and 1990s that began to reinterpret this aesthetic, with an often surreal and personal edge, such as Robert Gober’s child-sized chair, resting atop a mysterious floor drain; or Charles Ray’s photographic portrait of himself as a mannequin. Many of these artists delve into a distinctly psychological archaeology, while others focus on a manipulation of our visual experience in nearly imperceptible ways. A third section entitled Realism into Abstraction presents a range of works displaying a sense of all-overness that invites visual immersion in surface detail and momentary detachment from the real-life subject. Handmade Sleight of Hand, the fourth section, presents work by artists who make objects that are early indistinguishable from their real-life counterparts, but made with the traditional techniques of painting, sculpture, or drawing —Kaz Oshiro’s ‘‘dumpster’’ made of painted canvas; Susan Collis’s construction debris made from silver and exotic hardwoods; or Jud Nelson’s trash bag carved from Carrara marble. A fifth section, Special Effects: The Real as Spectacle, presents artists making work that engages an instant response—be it astonishment, fear, confusion, or delight—through their surprising size or unusual installation. This final section culminates with Robert Therrien’s sculpture of a gargantuan card table and set of folding chairs, installed in the Walker’s Cargill Lounge.

The works in the exhibition pose provocative questions: what does it mean to be making “realistic” art in our current era? What dialogue does realism have with artists’ expanded practice in the 21st century as well as the legacies of other postwar movements? Can realism, in the context of today’s wildly divergent forms, be seen as unconventional or radical?

Lifelike is one of the first museum presentations and publications to specifically gather the work of artists who have embraced the practice of meticulous recreation in their work, and have fused it with the subject matter of the everyday. In presenting recent work against a backdrop of 1960s and 1970s artists, Lifelike addresses work by several generations who have laid claim to this territory, embracing the handcrafted and the complicated in the face of technological shortcuts. In so doing, these artists have found material rich for exploration both formally and conceptually.

Exhibition Catalogue
The exhibition is accompanied by a 200-page, fully illustrated publication bringing together a range of scholarly contributors including curator Siri Engberg; Michael Lobel, associate professor of art history at the State University of New York at Purchase; Rochelle Steiner, dean of the Roski School of Art at the University of Southern California; and artist Josiah McElheny. The catalogue also includes a series of “Object Lessons,” statements from a selection of artists featured in the exhibition about the process and meaning behind their work. Distributed by D.A.P./Distributed Art Publishers, Inc., and available at the Walker Art Center Shop, 612.375.7633. $35 ($31.50 Walker members).

Thursday, April 19, 6:30 pm Target and Friedman Galleries David Lefkowitz’s paintings of obsolete fixtures and electrical outlets are dispersed throughout Lifelike. Join the Minneapolis-based artist as he discusses the role of humor, the uncanny, and realism in his work and throughout the exhibition.

Walker After Hours Preview Party:
Friday, February 24, 9 pm–12 midnight, $35 ($25 Walker members) The public is invited to celebrate the opening of the exhibition with cocktails and complimentary appetizers by Modern Events by D’Amico, soul and funk by the Hipshaker DJs, activities in the Art Lab, and the ever-popular Party People Pictures.