Classical Symmetry, Historical Data, Subjective Judgement. The exhibition draws its title from an essay by statistician David Spiegelhalter in which he identifies classical symmetry, historical data and subjective judgment as three fundamental bases for calculating the probability of an event. In Kuri's exhibition, these factors become sculptural conditions - pointing to the formal and conceptual underpinnings of his works. 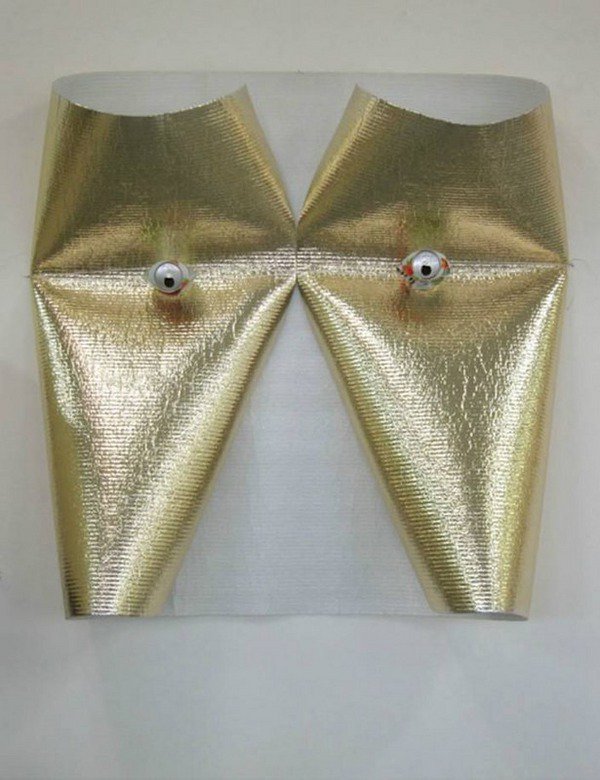 In his second show with Sadie Coles HQ, Gabriel Kuri is exhibiting a new body of work including a sequence of abstract self portraits and a group of floor-based 'platform' sculptures. The exhibition draws its title from an essay by statistician David Spiegelhalter in which he identifies classical symmetry, historical data and subjective judgment as three fundamental bases for calculating the probability of an event.1 In Kuri's exhibition, these factors become sculptural conditions – pointing to the formal and conceptual underpinnings of his works.

On the walls of the upstairs gallery is a series of sculptural self-portraits formed from gold-coloured insulation foam. The material has been curved and looped into symmetrical shapes based on mathematical graphs and charts, and presenting the body as a diagram of relations in which lines connect different points or pieces of information. Each work is appended with a seemingly miscellaneous object – a conch shell, crushed drinks cans, a shopping bag stuffed with objects, or a polythene bag holding indeterminate yellow liquid. These variously suggest male and female genitalia, or bodily functions and processes. At the same time, the foam's reflective coating endows the works with an unlikely elegance.

In his self portraits as chart, Kuri collapses together two different types of visual 'analogue' – linear graph and sculptural object. Kuri represents himself (whether in male or female guises) through the undulating parabolas of mathematical diagrams. And just as graphs involve a balance of axes, these sculptures' shapes result from a careful balance of their component objects: the object at the bottom works like a pendulum or anchor to the string on which the sculpture is suspended. Also upstairs are large wall-mounted sculptures modelled on hand-towel dispensers. In these, Kuri elevates a utilitarian device in scale and status. The dispenser becomes a larger-than-life art object, its functionality incidental to its combination of different forms – the glossy modernist shell and soft throwaway contents. As with the insulation foam, Kuri evinces the aesthetic appeal of utilitarian materials. These works also reflect his interest in the processes and products of mass-manufacture, and in physical and economic expenditure (earlier sculptures have incorporated hundreds of receipts skewered on wire, or stacked crates of bottled water).

Downstairs are three 'platform' sculptures which develop upon a piece in Kuri's exhibition at South London Gallery last year. Found panes of glass, concrete and plywood are mounted as upright slabs on wooden pallets. Kuri has likened their striated form to the stacked materials in hardware stores, or to indexical “slices of information”. Familiar or commonplace items have been reconfigured into non-figurative sculptures. These carry echoes of the materials' origins and uses, while the overall structures speak of diagrams or abstract assemblages. Balancing the platform sculptures are metal disks painted in bright red, yellow and blue and placed on the floor. They suggest abstract paintings deposed from their usual place on the wall and invested with the prostrate form of minimalist sculpture. Meaning has also been deposed: the interconnecting circles could be based on the ubiquitous Mastercard logo, but have been magnified and stripped of identifying text so as to produce sense of disproportion and dislocation.

In his essay, Spiegelhalter writes that "Probabilites are constructed on the basis of existing knowledge, and are therefore contingent". Kuri taps in to the contingency of matter itself by stripping objects back to essential states of materiality – hard or soft, reflective or opaque. His recycled objects are charged with altered meanings, denuded of their common associations or functions. At the same time, Kuri invokes the basic mathematical systems whereby knowledge is ordered. Like metaphors, his sculptures employ a different visual language to create disarmingly simple – yet visually alluring – emblems of consumption and expiration.