Geometric Abstraction. A selection from two recent bodies of work: "Geometric Abstraction" (2008) and "Maison de Verre" (2009). This pairing examines the dialogue between photographic representation and visual experience that is at the core of Welling's work. 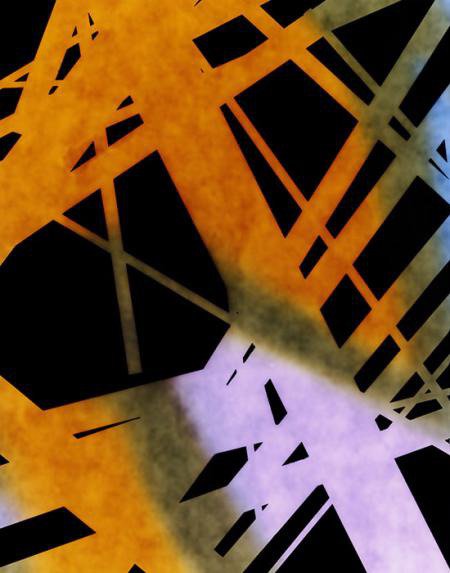 Regen Projects is pleased to announce an exhibition of work by Los Angeles artist James Welling. This exhibition will present a selection from two recent bodies of work: "Geometric Abstraction" (2008) and "Maison de Verre" (2009). This pairing examines the dialogue between photographic representation and visual experience that is at the core of Welling's work.

"Geometric Abstraction" extends the exploration Welling began in 1998 with his "New Abstractions". The original 1998 prints were made from digital negatives of photograms created by laying long strips of paper onto 8x10 inch sheets of black and white photographic paper. A few of the digital negatives of the photograms were accidentally created as positives. In 2008, these accidental positives became the point of departure for the "Geometric Abstractions". Using an array of colored filters placed in the color enlarger (a technique used in "Flowers", 2004-08), Welling filled the white areas with intense swaths of color.

In 2009 Welling photographed the Maison de Verre in Paris, France. Designed in 1932 by Pierre Chareau as the medical and home office for a gynecologist, the Maison de Verre was considered an early twentieth-century architectural masterpiece. For Welling, despite its glass walls, the house is dark and somber, and the interior light is shadowed and opaque. Welling photographed the interiors of the house to intensify the existing light found on the first two floors. Using Photoshop Curves, Gradient Maps, and Hue and Saturation adjustments, Welling modified the color in the Maison de Verre to such an extent that he essentially created a new work of architecture on top of Chareau's masterpiece.

James Welling engages the materials, production, and history of photography, into an interrogation of the nature of the medium. Welling creates photographs that are equally about vision, light, negative, and solid as they are about the depicted image and subject. Using an experimental approach to the medium of photography, Welling investigates a variety of formal and theoretical ideas about picture making. Appearance and illusion, the historical nature of cameras and of the photographic print, what we see or think we see in the act of perception, and how things are revealed photographically have long been at play in Welling's work.

Welling's "subject matter shifts from abstraction to documentation: crumpled aluminum foil; drapes; shadows; light sources; trains, tracks; trees; industrial sites; views outside his studio. His works question any assumed differences between abstraction and representation, between modes of presentation... Welling's photographs are objects in themselves, beautiful compositions that also gloss and comprise a history of photographic practices. Almost every idea its apparatus offers has been noted, somewhere...'From the beginning,' Welling observes, 'there was a dichotomy: the shadow of the object and the representation of the object, the two great historical poles that are photography's foundation.' He tells the medium's Manichaean history, ingeniously enlarging it with work that loves and ironizes both sides of the argument...Welling lavishes us with illusion and shatters it, too, simultaneously dispensing a shot of contemporary ambivalence to the mighty image." (Tillman, Lynne, "James Welling," Artforum, May 2001, pp. 139-143)

James Welling's work has been the subject of exhibitions throughout Europe, the United States, and Canada. Recent solo exhibitions include the Palais de Beaux-Arts, Brussels; Sprengel Museum Hannover, Germany; Kunstmuseum Luzern, Switzerland; Carnegie Museum of Art, Pittsburgh; Wexner Center for the Arts, Columbus. An upcoming retrospective of Welling's work will open at the Cincinnati Art Museum in January 2013.