A collective of artists and curators, Irmavep Club imagines its working methods as an artist-run space without a fixed space. Considered like a succession of episodes, the story now continues with two new parts: "Livret IV" and "Livret V" that are shown simultaneously. The fourth introduces the fifth and vice versa. With over 700 works, the museum holds a significant Raoul Hausmann (1886-1971) collection. Nevertheless, drawings, photographs, collages and poems only superficially reveal the amplitude of this artist's work. 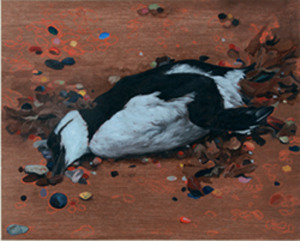 A collective of artists and curators, Irmavep Club imagines its working methods as an artist-run space without a fixed space. Following the two first exhibitions in Paris (Art Concept gallery, Schleicher & Lange gallery) and one in Amsterdam (Motive Gallery), it is now at Rochechouart that the collective is deploying its programme. Considered like a succession of episodes, the story of Irmavep Club now continues with two exhibitions. "Livret IV" and "Livret V" are shown simultaneously. The fourth introduces the fifth and vice versa.

"Livret IV" is a group show. "Livret V" is devoted to the work of Maurice Blaussyld (born in 1960, Calais, France), his first major museum presentation. Following the emergence of his artistic practice at the end of the 1980s, Maurice Blaussyld decided to subtract one by one elements that constitute his work. In 1992, Bertrand Lamarche-Vadel wrote: "Maurice Blaussyld makes the assumption that art has become an ideal in the making and that one must prepare the advent of objects. Such is the confusion that surrounds the denied objects he presents". Since then Maurice Blaussyld has continued with the same determination the scripting of an oeuvre of repeated mystery. The contours take the form of ambivalent objets, image combinations, texts, books or drawings on graph paper that only detail the invisible. Over time his work seems to have 'mutated', adopting different formats, repeating itself by presenting alterations in order to always go towards the essential, that is, its near appearance. For Rochechouart, the artist is presenting a suite of earlier works and a new proposition in three museum rooms.

As each of the Irmavep Club livrets, "Livret IV" is conceived as a conversation. The works sketch out a story line which carries intuitions and connections by sympathies. "Livret IV" took shape while becoming acquainted with the work of Maurice Blaussyld, as well as by the occurrence of relations, repetitions and differences in the Museum collections and premises. The guests weave close relations with the collection of Rochechouart's Departmental Museum of Contemporary Art. Gustav Metzger's historical and political work on the power of the image dialogues with Bruno Serralongues's research on the image and current news. Mel O'Callaghan responds to the circular structure of the castle tour by installing a pendulum. The theme of the limit is also at the core of "Livret IV": limits that separate territories, fiction and reality, abstraction and representation. Such is the case in Thomas Merret's invisible frontiers, Guillaume Leblon's undefinable sculptures, or Clémence Torrès's actual bodily limits imposed by her sculptures.

“To repeat is to behave in a certain manner, but in relation to something unique or singular which has no equal or equivalent. And perhaps this repetition at the level of external conduct echoes, for its own part, a more secret vibration which animates it, a more profound, internal repetition within the singular. This is the apparent paradox of festivals: they repeat an 'unrepeatable'. They do not add a second and a third time to the first, but carry the first time to the 'nth' power.”, as Gilles Deleuze wrote in 1969 in his introduction to Difference and Repetition. To end the exhibition, Subi dura a rudibus (2010) is a cinematographic installation by the Dutch artists Lonnie van Brummelen & Siebren de Haan which takes as its base a 16th century tapestry representing the conquest of Tunis by Charles V. The wall hanging was filmed, as was the related drawn cartoon by Cornelis Vermeyen. The two images are projected side by side in a mirror effect. On one side the model and on the other the woven translation join and distance themselves through repetition.

With over 700 works, the Rochechouart Departmental Museum of Contemporary Art holds a significant Raoul Hausmann (1886-1971) collection. Nevertheless, drawings, photographs, collages and poems only superficially reveal the amplitude of this artist's work. Indeed Hausmann has alternatively and simultaneously been a typographer, dancer, anthropologist, architect. His works need to be considered like the visual manifestation of a thought process that goes beyond the realm of traditional fine arts. This is the dimension explored in this new presentation articulated in three chapters.

In the conclusion of his Manifesto of PREsentism in 1921, Raoul Hausmann writes: "We request that this little individual fraud ends and demand the broadening and renewal of man's sensory emanations, since the birth of the working class, an intrepid and ahistorical humankind, has taken precedence. The individual considered as an atom, has only one duty : to find his law through no matter what form imposed on his own hardened ego – against his ego. In this newly present world we should realize the voluntary abandon of all force inherent in the atom!!!".

This text comes after the artist's revolutionary years and Dada and states his will to seek change via exceeding art by its realisation in daily life. Raoul Hausmann's quest does not deviate from the end of the 1910s until his death in 1971 in Limoges: if man wants to change the world, he has to transform his own individual life and most of all his sensory appreciation of the world. As an artistic quest, it is primarily about an endlessly renewed experimentation. This is experienced through the search for new laws, new work to exercise on an individual level, but this needs to happen in a collective sense aiming for the advent of a new world. This perspective feeds the artist's entire production, from the first pictorial productions to his subsequent writing. Raoul Hausmann's research has led him to touch upon writing, photography, drawing, collage but also dance, fashion, architecture or even anthropology. Based on the theoretical texts which are preserved in Rochechouart's Departmental Museum of Contemporary Art archives, this selection of work organised in three chapters ("Optophonetic", "Architecture" and "Photography") visually reveals traces of Hausmann's research. This display ends with a documentary film about the artist.