Shilpa Gupta: a key selection of new and recent works, including her major installation Singing Cloud, 2008-09, an amorphous cluster of 4000 black microphones suspended from the ceiling. Sophy Rickett's installation incorporates video and surround-sound audio, creating an immersive environment that portrays the anticipation of the crowd on the banks of the river at night. Damien Roach was invited to be in residence throughout 2012 in order to develop a new installation for the second annual foyer commissions. 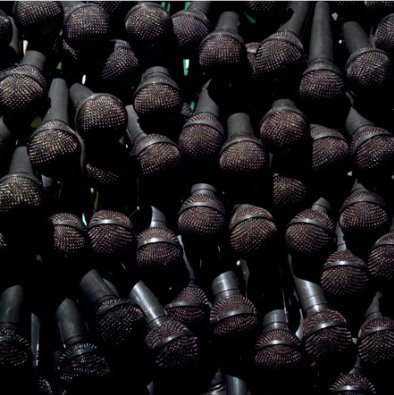 Shilpa Gupta
Someone Else

Shilpa Gupta creates artwork using a variety of media including video, objects, photography, sound and performances to examine such themes as desire, conflict, militarism, security, technology and human rights. Gupta's application of technology in her works reveals her interest in how various media affect our understanding of the political realm. Considering technology as being an extension of body, mind and perception, she possesses a sharp political consciousness about the role, psychology and aesthetics of these media forms.

The exhibition will present new work alongside a key selection of works by Gupta from recent years, including her major installation Singing Cloud, 2008-09, an amorphous cluster of 4000 black microphones suspended from the ceiling. Rather than registering sound, the microphones are reverse-wired and emit sounds that travel in ripples over the surface, created through abstracting the results of psychological tests on numerous individuals about the reception of images.

Shilpa Gupta is one of the most significant emerging artists working in India today, and this will be her first major solo exhibition in the UK.

Someone Else by Shilpa Gupta sees the launch of a year long series of exhibitions, film programmes, performance and special events entitled A Parallel Universe - alternative realities and co-existing worlds.

Sophy Rickett
To The River

Sophy Rickett’s new work To The River takes its inspiration from the Severn Bore – an amazing phenomenon of nature whereby a large tidal wave runs along the River Severn during the moon’s equinox. Rickett’s installation incorporates video and surround-sound audio, creating an immersive environment that portrays the anticipation of the crowd on the banks of the river at night awaiting the tidal surge.

Premiered as a part of Artsway’s New Forest Pavilion at the Venice Biennale this year, To The River develops Rickett’s interest in the role of the camera as a mediator between people and the natural world, and explores how light and darkness define and articulate our relationship to space. Predominantly using lens-based media – photography and video – she considers the abstract possibilities and narrative tendencies of these media formats. Made mainly at night, her works are often minimal in character, playing on the latent narrative possibilities of place.

To The River previewed at Artsway’s New Forest Pavilion at the 54th Venice Biennale.

A publication, also entitled To The River, and featuring texts by Sacha Craddock and Barry Schwabsky accompanies the exhibition. Copies will be available in the bookshop priced £12.99.

To The River is produced by Elena Hill in collaboration with Arnolfini and ArtSway.

Arnolfini has invited Damien Roach to be in residence throughout 2012 in order to develop a new installation for the second of our annual foyer commissions. Roach appropriates images and materials from the broadest spectrum of culture, reconfiguring them through methodologies that imagine new modes of perception, thought and visualisation. Borrowing from sources and disciplines as diverse as architecture, music, psychoanalysis, graphic design and philosophy, the installations and works that he creates are highly experiential, evocative of a sense of altered and heightened states of cognition.

For this commission encroaching Arnolfini via its foyer, lifts, stairwell, lobby, and even its branding, Roach has developed a series of interventions that will unravel over the course of the year. Subtly shifting the fabric of the building, including surface textures, lighting, windows, scents, sounds and behaviours, the building will possess a hybrid and shifting quality, with mirages, mutations and recollections becoming the very material of the project.