All the King's Horses

A Small Modification and Derive of the Pontus Hulten Collection in the Renzo Piano Grotto: Jacqueline de Jong has made a selection from the collection, adding some of her own paintings and sculptures. Works by, among others, Jasper Johns, Marcel Duchamp, Pontus Hulten, Niki de Saint Phalle. "All the King's Horses" is a series of exhibitions, seminars and events that investigate the legacies and the actuality of the Situationist movement. 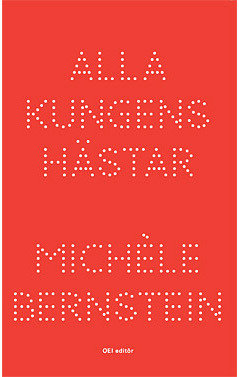 A Small Modification and Dérive of the Pontus Hultén Collection in the Renzo Piano Grotto: Jacqueline de Jong has made a selection from the Pontus Hultén collection, adding some of her own paintings and sculptures. Works by, among others, Jasper Johns, Marcel Duchamp, Pontus Hultén, Niki de Saint Phalle.
All the King’s Horses is a series of exhibitions, seminars and events that investigate the legacies and the actuality of the Situationist movement and its network of associated groups and fractions.

Jacqueline de Jong has made a personal selection from Pontus Hultén’s bequest and complemented it with a few of her own paintings and sculptures. This exhibition is part of the series All the King’s Horses, and will be shown in the Pontus Hultén Study Gallery on the Second Floor. Jacqueline de Jong was a member of the situationist movement. The Situationist International – the hub of the movement – strove to subvert all established culture, and proposed that artists should create a revolutionary consciousness instead of experimental works of art that were nothing but commodities in the capitalist system. This resulted in the exclusion of most artists from the Situationist International in 1962, but de Jong and many others continued to work both artistically and engage in revolutionary practices.

Jacqueline de Jong came into contact with the situationists in the late 1950s and became a member of the Situationist International in 1960. Between 1962 and 1967, de Jong published the influential periodical The Situationist Times. The situationists celebrated homo ludens, the playing human. De Jong regards life as a game, with different rules, just like football or a pinball machine.

De Jong’s exceedingly personal selection for the Pontus Hultén Study Gallery includes works by her friends and colleagues from the 1960s and later. Artists such as William Copley, Daniel Buren, David Hockney and Eva Aeppli share a sense of playfulness and a critical approach. The selection is complemented by a few works by de Jong herself. Her expressive style has persisted over the years. Her paintings After Goya from 2008 display the same energetic brushwork and use of colour as Les oiseaux se demandent pourquoi from 1962. Considerably more subdued works are Ascona Inondation and Ascona Neve from 2009, in which de Jong has portrayed a few trees in a Swiss landscape flooded by water and covered in snow.

Jacqueline de Jong has also made sculptures. A couple of small sculptures from 1972 are juxtaposed with Eva Aeppli's Kaya from 1973. In Pommes de Jong (2008-2012) Jong has gilded some shrivelled potatoes, transforming them into sculptures and jewellery. As through alchemy, the lowly objects are both transformed and refined. The Pontus Hultén bequest consists of nearly 800 works of art which Hultén donated to Moderna Museet in 2005. The collection comprises the great and the trivial in a carnivalesque mixture. Hultén kept an open mind for serendipity and randomness that can transform into art in the creative process. As an artist, museum officer and collector, he championed the total freedom of art.

All the King’s Horses is a series of events, seminars and exhibitions exploring the situationists, the last and most influential avant-garde movement of the European post-war era. The Situationist International, the hub of the movement, developed several famous concepts and methods in the 1950s and 1960s, all aimed at transcending art and tearing down all established culture. The impact of their concepts and models on contemporary art and thinking can hardly be over-estimated.

All the King’s Horses is a multinational project that will follow the Situationist International and its network of related groups and sections to various places around Europe. It is organised jointly with Moderna Museet and was initiated by Daniel Birnbaum and Kim West.