The exhibition features 14 large-scale paintings from Wiley's new "World Stage: Israel" series. They are vibrant portraits of Israeli youths from diverse ethnic and religious affiliations. Also included are 10 works of Jewish ceremonial papercuts and large textiles chosen by the artist from the museum's collection. 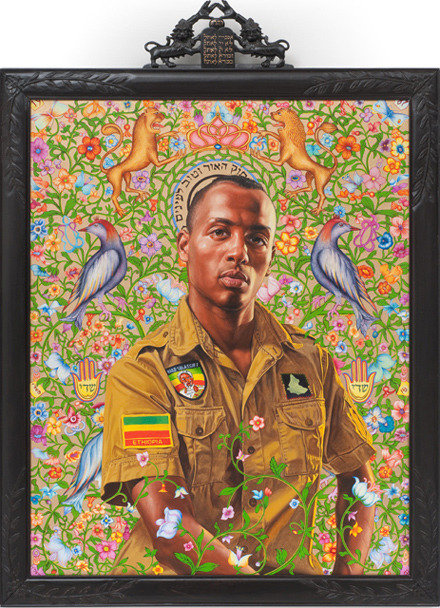 The Jewish Museum will present Kehinde Wiley/The World Stage: Israel, from March 9 through July 29, 2012. A new acquisition by the contemporary American artist Kehinde Wiley (born 1977, Los Angeles) served as impetus for the exhibition. The painting, Alios Itzhak (2011), is a nine-foot tall portrait of a young Jewish Ethiopian-Israeli man surrounded by an intricate decorative background inspired by a traditional Jewish papercut in the Museum's collection. This work was acquired in honor of The Jewish Museum's recently retired director Joan Rosenbaum. The exhibition features 14 large-scale paintings from Kehinde Wiley's new World Stage: Israel series. The vibrant portraits of Israeli youths from diverse ethnic and religious affiliations are each embedded in a unique background influenced by Jewish ritual art. Also included are 10 works of Jewish ceremonial papercuts and large textiles chosen by the artist from The Jewish Museum's collection. All of the 14 paintings on view are being displayed in New York for the first time.

The artist-designed and hand carved wooden frames created for World Stage: Israel paintings combine imagery of the Hands of Kohen (the blessing hands of a Kohen - a descendant of the high priest, Aaron) and the Lion of Judah (symbolizing power and majesty and often represented in symmetrical, confronting pairs of lions) each supporting a text in Hebrew. For Wiley's Jewish subjects the text shown is the Ten Commandments; for his Arab Israeli subjects, the plea of Rodney King, victim of a 1991 police beating in Los Angeles that sparked race riots, "Can we all get along?”

Wiley says his appropriated decorative backgrounds serve as catalysts for his paintings. The paintings represent a unique fusion of the orthodox with the secular and European traditions with those of North Africa and the Middle East. Roughly two-thirds of the portraits in the Israel series are of Ethiopian Jews, others are of Ashkenazi Jews and Arab Israelis. The artist is driven by an ongoing exploration of globalization, diasporas, cultural hybridity, and power. Saying he knows what it feels like to exist on the periphery, Wiley likes to catapult often powerless, anonymous young men of color onto enormous canvases and into the visual language of the powerful. The large size of the paintings reflects Wiley's observation that scale has been used as a measure of historical importance throughout art history.

One of the most significant young artists working today, Kehinde Wiley is originally from Los Angeles and currently lives and works in Beijing, Dakar and New York. A gifted painter, he takes everyday people and paints them often larger than life-size in the grand poses of nobles, saints and colonial rulers from classical European portraiture. While the body language is borrowed from the past, the clothes are current and often hip-hop in style. The idea is to endow status on his young, urban subjects from carefully chosen spots around the globe. Rich tapestries of color and pattern form the bright and ornate backgrounds from which the young men posture. Patterns are found in the decorative traditions of each culture Wiley has chosen for his World Stage series. The fifth in the series, Israel, is close to completion with 14 of the 18 paintings in the set on view in The Jewish Museum’s exhibition. Prior sites for Wiley’s ambitious series have been China, Africa, Brazil and India. To find his subjects – almost always young, black and male – he goes to places the hip and young hang out.

For The World Stage: Israel, Wiley scouted in discos, malls, bars and sporting venues in Tel Aviv and Jerusalem in 2010. He formally poses the young men and photographs them. The result forms the basis for his paintings. A nine-minute video in the exhibition shows Wiley in marketplaces, homes and public arenas of Israel’s two largest cities finding the faces and figures that will become his subjects.

Kehinde Wiley was born in Los Angeles, received a BFA from San Francisco Art Institute in 1999, and a MFA from Yale University in 2001. His paintings are in the collections of over forty museums including the Metropolitan Museum of Art, New York; Los Angeles County Museum of Art; Hammer Museum; High Museum; Walker Art Center; Brooklyn Museum; and The Jewish Museum, New York, to name a few. Selected exhibitions include The National Portrait Gallery, Brooklyn Museum, the Studio Museum in Harlem, and Columbus Museum of Art, among others. His work has been the subject of eight monographs to date, with a forthcoming Rizzoli publication scheduled for release in March.

Kehinde Wiley/The World Stage: Israel has been organized by Karen Levitov, Associate Curator at The Jewish Museum. A 64-page catalogue is being published by Roberts & Tilton, Culver City, California. The hardcover book contains 40 color images and essays by Claudia J. Nahson, Ruth Eglash, and Shalva Weil, Ph.D. It fully illustrates Wiley’s new portraits from The World Stage: Israel. The catalogue will be available at The Jewish Museum’s Cooper Shop for $ 40.00.

On Thursday, March 15 at 6:30 pm, The Jewish Museum will present Kehinde Wiley in conversation about The World Stage: Israel series with Thelma Golden, Director and Chief Curator at the Studio Museum in Harlem. Tickets for this program are $15 for the general public; $12 for students and 65+; and $10 for Jewish Museum members.

Kehinde Wiley/The World Stage: Israel is made possible by the Andrea and Charles Bronfman Philanthropies, the Melva Bucksbaum Fund for Contemporary Art, and the Barbara S. Horowitz Contemporary Art Fund, with additional support from Jerome and Ellen Stern.

The Jewish Museum
Fifth Avenue at 92nd Street New York City
Museum hours are Saturday, Sunday, Monday, and Tuesday, 11am to 5:45pm; Thursday, 11am to 8pm; and Friday, 11am to 4pm.
Museum admission is $12.00 for adults, $10.00 for senior citizens, $7.50 for students, free for children under 12 and Jewish Museum members. Admission is free on Saturdays.