Drawings - Frame / Line / Action / Drawn Novel. The exhibition presents ground-breaking work from the late 1950s, 60s and 70s together with the artist's latest retrospective and autobiographical drawing project. The graphic novel sheds light on the ideas and motivations informing his life-long practice and, in particular, the importance of drawing. 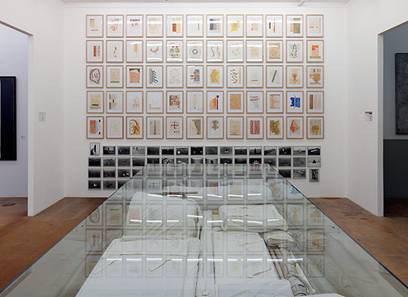 This will be the first solo exhibition of Franz Erhard Walther (b. 1939 Fulda, Germany) in the UK. The exhibition will include ground-breaking work from the late 1950s, 60s and 70s together with the artist’s latest retrospective and autobiographical drawing project – Dust of Stars. A Drawn Novel. The graphic novel sheds light on the ideas and motivations informing his life-long practice and, in particular, the importance of drawing.

Walther participated in many era-defining exhibitions, such as Harald Szeemann’s ‘When Attitudes Become Form’ (1969) and MoMA’s landmark installation group show ‘Spaces’, curated by Jennifer Licht in 1970, yet his work has had little exposure in the UK.

Walther began to experiment with ways to actively involve spectators in the production of the work in the late 1950s. At this time he produced ‘word’ pictures in a bid to force the viewer to create their own image. In the early 60s he began to experiment with paper as the work itself rather than as a ground, displaying the work in stacks that the audience were invited to leaf through, or large books with which they could interact. This led to his best known work, a fifty-eight part sculpture action First Work Set (1963–69). These are canvas structures, described by the artist as ‘instruments’, which can be exhibited as 'storage' installations or as structures ready to be worn and interacted with during object demonstrations in the gallery space. Hundreds of Work drawings were produced before and after these actions and a selection will be included in the exhibition.

The most recent work in the exhibition is connected to these earlier works: Dust of Stars. A Drawn Novel (2007/9) is composed of 524 pages of pencil drawings and handwritten texts, a selection of which will be included. As a visual and textual record of his life and work, Dust of Stars traces the artist’s longstanding engagement with drawing as it informs the conceptual underpinnings of his work, interweaving with the mediums of sculpture and performance.

Franz Erhard Walther (b.1939, Fulda, Germany) is one of Germany’s most prominent living artists, having exhibited extensively across Europe since the 1960s and participated in four editions of Documenta during the 1970s and 1980s. From 1957 to 1964 Walther studied successively at the Werkkunstschule Offenbach, the Hochschule für Bildende Künste, Frankfurt am Main (Städelschule), and finally the Kunstakademie Düsseldorf, where he studied under K. O. Götz and took part in Fluxus actions convened by the Kunstakademie’s Professor of Monumental Sculpture, Joseph Beuys. Between 1967 and 1973 Walther lived in New York City, during which time he was included in such important group shows as Spaces (1969–70, MoMA, New York) and curator Harald Szeemann’s When Attitudes Become Form (1969, Kunsthalle Bern). From 1971 to 2009 Walther was Professor at Hochschule für bildende Kunst, Hamburg. Recent retrospectives of his work have been mounted by Mamco, Musée d’art modern et contemporain, Geneva (2010) and Dia:Beacon, New York (2010–12). The artist continues to live and work in Fulda, where the Franz Erhard Walther Foundation is also based.

Drawing Room will produce a fold-out exhibition guide with a text by Stephanie Straine and images of selected works.