The first group of the 14 exhibitions curated by second-year students in its graduate program. The iniative includes work by more than 25 leading and emerging contemporary artists such as Nina Katchadourian, Joachim Koester, Timur Si-Qin, and Danh Vo. These projects focus on diverse concepts and themes, and in a range of practices. "Matters of Fact" revisits a number of key encounters from the institutional history of the Hessel Museum of Art: between collector and artist, curator and exhibition, art and art history. Works by Robert Mapplethorpe, Felix Gonzalez-Torres, Ulrich Ruckriem, Anish Kapoor, Anne Collier, among others, with reinstallations of historic exhibitions. 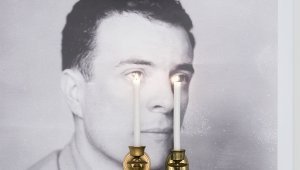 The Center for Curatorial Studies at Bard College (CCS Bard) commences its 20th anniversary year schedule of exhibitions with Matters of Fact, a collaborative project organized by CCS Bard Executive Director Tom Eccles; CCS Bard Curatorial and Program Associate Nathan Lee; and CCS Bard graduate students Suzy M. Halajian and Alicia Ritson, with reinstallations of historic exhibitions by CCS Bard alumnus Kelly Taxter and CCS Bard co-founder, Marieluise Hessel. Opening on March 18, 2012, Matters of Fact will be on view at the Hessel Museum of Art at Bard College through May 27, 2012.

Matters of Fact revisits a number of key encounters from the institutional history of CCS Bard and the Marieluise Hessel Collection: between collector and artist, curator and exhibition, and art and art history. Two historical exhibitions will be restaged in the Hessel Museum’s large central galleries, each focusing on areas of the collection that have not been presented in depth since the museum opened in 2006: Arte Povera and Pattern and Decoration. Matters of Fact will also highlight the work of two artists – Robert Mapplethorpe and Felix Gonzalez-Torres – with whom Hessel had a special affinity and close connection, and both of whose work she collected during their lifetimes. Rarely seen works by major artists such as Anish Kapoor and Ulrich Rückriem, several new acquisitions to the Hessel Collection, and a special presentation by CCS Bard graduate students, will also be on view.

Among the historic exhibitions being restaged for Matters of Fact is a component of Passions and Cultures: Selected Works from the Rivendell Collection 1967 – 1991, one of CCS Bard’s inaugural exhibitions first presented in 1992. Curated by Marieluise Hessel, Passions and Cultures featured an installation of Arte Povera sculpture. Matters of Fact’s installation includes works by Giovanni Anselmo, Jannis Kounellis, Mario Merz, Giuseppe Penone and Gilberto Zorio.

In 2002, first-year CCS Bard students Jimena Acosta Romero, Robert Blackson, Amaya de Miguel Sanz and Kelly Taxter curated the exhibition Too Much Joy, a survey of works from the Pattern and Decoration movement, featuring works by Brad Davis, Valerie Jaudon, Robert Kushner, Thomas Lanigan-Schmidt, Kim MacConnel, Judy Pfaff, Ned Smyth, Robert Zakanitch, Joe Zucker, among others. For Matters of Fact, alumnus Kelly Taxter will reconsider and reinstall this exhibition, and engage once more with a movement that is puzzlingly absent from the art historical record. This re-installation of Too Much Joy will be on view in the newly re-named Robert Mapplethorpe Gallery in the Hessel Museum of Art.

On view in an adjacent gallery will be a selection of Robert Mapplethorpe’s black and white photographs of flowers, along with an audio recording of a conversation between the artist and Marieluise Hessel that took place in 1988. Recorded nine months before Mapplethorpe died of AIDS, the intimate conversation raises questions of objectification and abstraction, race and representation, desire and gender, and touches on Hessel’s quest to acquire Mapplethorpe’s controversial X Portfolio and her intention to one day build a museum to house her collection.

Matters of Fact also showcases a number of Felix Gonzalez-Torres’ seminal pieces from the Hessel Collection, including (Untitled) North and Untitled (Passport). These works will be contextualized alongside a selection of archival documents culled from the extensive correspondence between Gonzalez-Torres and Hessel. These documents include letters, photographs, newspaper clippings, and a pair of plastic figurines from the artist’s extensive collection, many of which he hand-delivered to friends as a final gift before his death in 1996.

Intersecting, connecting, and at times disrupting these historical nodes, Matters of Fact presents an additional group of artists, art works, and installation strategies that offer their own set of encounters. Among the works on view will be pieces by artists Ulrich Rückriem, Anish Kapoor and Ernesto Neto and a number of new acquisitions of works by Anne Collier, Isa Genzken, Hans-Peter Feldmann, Robert Heinecken, Marlo Pascual, Martha Rosler, Rosemarie Trockel and Gillian Wearing.

The Center for Curatorial Studies at Bard College opened its doors in 1992. Celebrating its 20th Anniversary in 2012, CCS Bard will present a series of exhibitions by students as well as a roster of international artists working in a range of practices.
The exhibitions and projects are curated by second-year students in its graduate program in curatorial studies and contemporary art. The students have organized these exhibition and projects as part of the requirements for the master of art’s degree.

Three Evidentiary Claims
Artists: Erin Shirreff, Lesley Vance, and Michael Jones McKean
Curated by Rachel Cook
The exhibition triangulates the site of the gallery, a panel discussion, and an object-idea handout, all of which bring the idea of indeterminacy into a particular frame to consider the problem of creating meaning within artworks.

The Center for Short-Lived Phenomena
Artists: Nina Katchadourian, Danna Vajda, Swintak
Curated by Clara Halpern
The Center for Short-Lived Phenomena is a temporary institution, which will run inside and alongside CCS Bard. Artists Nina Katchadourian, Danna Vajda and Swintak have contributed projects that will unfold over the course of the institution’s month-long existence.

Ray Johnson: The Dover Street Years 1953-1960
Artist: Ray Johnson
Curated by: Anastasia Rygle
It really isn’t necessary to see the moticos or know where it is because i have seen them. perhaps i might point them out to you. the best way is to go about your business not thinking about silly moticos because when you begin seeing them describing what they are or where they are going is so just make sure you wake up from sleeping and go your way and go to sleep when you will. the moticos does that too and does not worry about you. perhaps you are the moticos. –Ray Johnson What is a Moticos

Student-curated exhibitions at CCS Bard are made possible with support from the Rebecca and Martin Eisenberg Student Exhibition Fund; the Mitzi and Warren Eisenberg Family Foundation; the Audrey and Sydney Irmas Charitable Foundation; the Robert Mapplethorpe Foundation; the Board of Governors of the Center for Curatorial Studies; and by the Center’s Patrons, Supporters, and Friends. Additional support provided by the Monique Beudert Award Fund.