Ornothopoesie: Birds are the landscape's memory. Drawing his source material from observations of different species, songs, movements and histories of birds, he produced a multifaceted oeuvre that explores the boundaries between visual art, poetry andornithology. On large sheets of paper he created drawings, diagrams and texts. 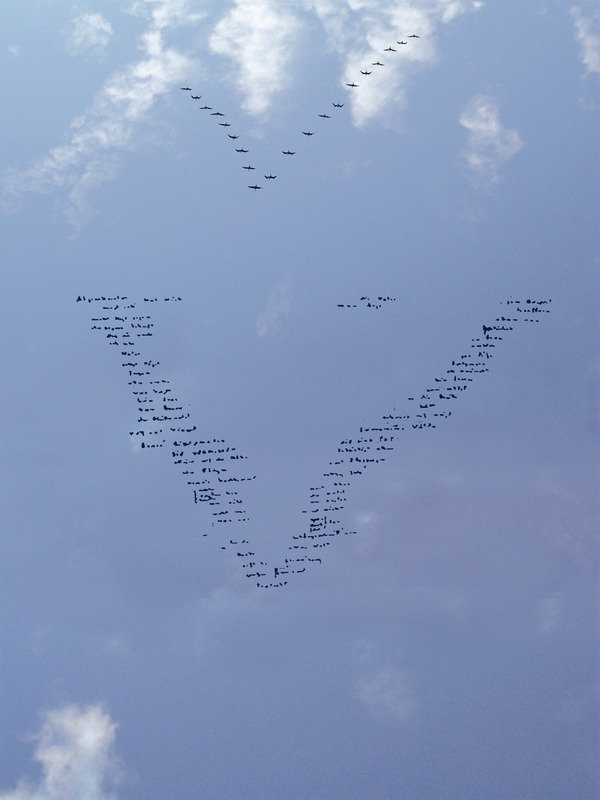 Georg Jappe was inspired by birds throughout his life: drawing his source material from observations of different species, songs, movements and histories of birds, he produced a multifaceted oeuvre that explores the boundaries between visual art, poetry andornithology. He even coined the term "Ornithopoesie" (ornithopoetry) todescribe his work. On all of his expeditions – whether these took him to the Lower Rhine region, the mountains, the Halligen islands, the bogs of Teufelsmoor or the islands of Spitsbergen and Greenland – Jappe recorded anddocumented birds in their (often endangered or damaged) natural habitat. The resulting journals formed the basis of his large-format Schreibtischblätter and numerous text-based drawings. On large sheets of paper he created drawings, diagrams and texts: bird lists, dreams,drafts of poems, exhibition designs, landscape notations and frequentlyunfathomable experiences – a synthesis of writing and drawing that has ties toconcrete poetry – "optical poetry", as Jappe himself called it.

This exhibition provides new insight into Georg Jappe's oeuvre, with a particular emphasis on his workrelating to birds. The display in the Hall of Master Drawings – including books, the oversized expanding file OmU (Original mit Untertiteln), a Chinese accordion fold album, photographic works, partly written "Bildbeschreibungen" (image descriptions) and a selectionof bird journals – testifies to his great artistic diversity. One of Jappe'sfilmic works, Der fließende Turm, will also be screened, which features footage filmed by the artist Lili Fischerin a variety of landscape settings such as the Scottish archipelago of St.Kilda or the Teufelsmoor, combined with bird songs and prose by Georg Jappe.

This display is also an introduction to a selection of Jappe's works that has recently been donated to the Hamburger Kunsthalle by the Lili Fischer und Georg Jappe Stiftung.

Georg Jappe (1936–2007) was a literary and art critic; from 1979 to 2001 he was professor of aesthetics at the Hochschule für bildende Künste in Hamburg. Jappe was a member of the Bielefelder Colloquium Neue Poesie. Asan artist he participated in numerous group and solo shows, including anexhibition in 1996 at the Hamburger Kunsthalle and the Stadtmuseum in Cologne.