Red passage. His work reflects different aspects of personal freedom, military control, political suppression, identity, and exile. He utilizes black humour as a way of undertaking the cruelty, injustice, and emergency of his experiences in life. 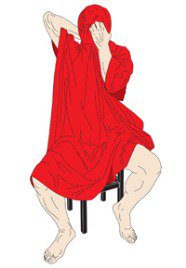 Ali Cabbar is an Istanbul born artist whose work reflects different aspects of personal freedom, military control, political suppression, identity, and exile. Cabbar left Turkey after being jailed for three years for publishing a newspaper—a consequence of the military coup d'etat of 1980. He first immigrated to Australia for six years, and then to Belgium where he still resides. Even so, his works—including paintings, drawings, installations, and video—have always been closely linked with Turkey. Cabbar's works address political, psychological, and existential dimensions of an individual, processed from a highly politically engaged life. He utilizes black humour as a way of undertaking the cruelty, injustice, and emergency of his experiences in life. This manifests a connection between aesthetics and politics in his works.

Narration is a precept for Cabbar's works. His narrations always develop as a personal inquiry toward certain issues that he has been confronted with as an individual; they are mostly fragmentary, as if to be moments and motions extracted from either anonymous anecdotes or personal reminiscences with incomplete tenses. Cabbar's drawing style follows Ligne Claire, and therefore is quite distinctive in terms of clarity and simplicity. In this simplicity, he exploits details as partitions to develop fragmented narrations.

In 2010, Yapi Kredi Cultural Center hosted the first major retrospective exhibition of the artist: Disquiet Shadow. Curated by Basak Senova, the exhibition displayed a wide range of his works, which carried a sense of disquiet and loneliness. In the same vein, the book accompanied the exhibition which rendered ideas from The Book of Disquiet by Fernando Pessoa, featured with a text by Başak Şenova, her interview with the artist, and a piece written for this catalogue by Belgian art critic Roger Pierre Turine. The book was edited by Mine Haydaroğlu. Two years later, Yapi Kredi Cultural Center re-invited Ali Cabbar and Basak Senova—the curator of Disquiet Shadow—to host Cabbar's latest project Red Passage, which raises important issues from the current socio-political situations in Turkey.

Red Passage is a project that assimilates a critical approach to the power politics, values​​, hopes, sanctions, restrictions, and beliefs that surround us. In this project, Ali Cabbar has produced faceless icons based on the acquiescing of these values​.

In Red Passage, Cabbar graphically renders the relationship between life and death. He links the acceptance and legitimization of death to the exploitation of these values. The artist's symbolically embellished icons are put into words sometimes through blood, through a flag, at times with a border, and sometimes with conviction. The passage, located in the gallery, lined up with the works salutes the viewer as if in a procession. While the spatial design of the exhibition guides the viewer to be an active participant of the project, it also underlines the architectural changes within Yapi Kredi Cultural Center.