Saraab. More than 50 works including 17 new commissions by one of the most influential contemporary artists on the international art scene, ranging from his signature gunpowder drawings to large-scale site-specific installations and the explosion event of Black Ceremony. 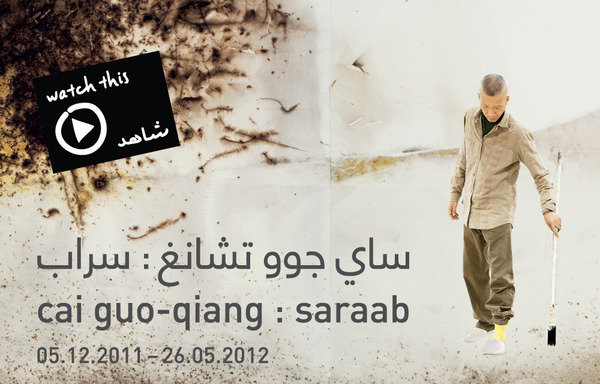 Saraab continues Mathaf’s commitment to present an Arab perspective on modern and contemporary art as it turns eastward to consider dynamics across Asia for the first time. Works on view explore the historic and contemporary iconography of the Arabian Gulf and its seafaring culture, as well as the Islamic history of Quanzhou. They also address the ambiguity of Qatar and China’s relationships to one another, and Cai’s own creative development over a lifetime. In keeping with its title, Saraab questions whether there is something illusory or unobtainable about the process of cultural, temporal and geographic translation.

Cai Guo-Qiang was born in 1957 in Quanzhou, Fujian Province, China, and was trained in stage design at the Shanghai Theater Academy. His work has since crossed multiple mediums within art, including drawing, installation, video and performance art.

While living in Japan from 1986 to 1995, he explored the properties of gunpowder in his drawings, an inquiry that eventually led to his experimentation with explosives on a massive scale and to the development of his signature explosion events. Drawing upon Eastern philosophy and contemporary social issues as a conceptual basis, these projects and events aim to establish an exchange between viewers and the larger universe around them, utilizing a site-specific approach to culture and history.

Cai was awarded the Golden Lion at the 48th Venice Biennale in 1999, the 7th Hiroshima Art Prize in 2007, and the 20th Fukuoka Asian Culture Prize in 2009. He was Director of Visual and Special Effects for the opening and closing ceremonies of the 2008 Summer Olympics in Beijing. In 2008, he was the subject of a retrospective at the Solomon R. Guggenheim Museum, New York. In fall 2010, Cai created Odyssey for the Museum of Fine Arts Houston. Installed as part of the museum‘s ongoing Portal Project, it is one of his largest gunpowder drawings to date. He currently lives and works in New York.