'Resonance and Silence - Goetz Collection at Haus der Kunst' is a group show exploring. The acoustic perception of moving images in space is one of the great possibilities of video art. Concurrently an exhibition presenting eight works by Janet Cardiff and George Bures Miller, who, by combining image and tone and replicated spaces, activate as many of the viewer's senses as possible to make the depicted events as real as possible. 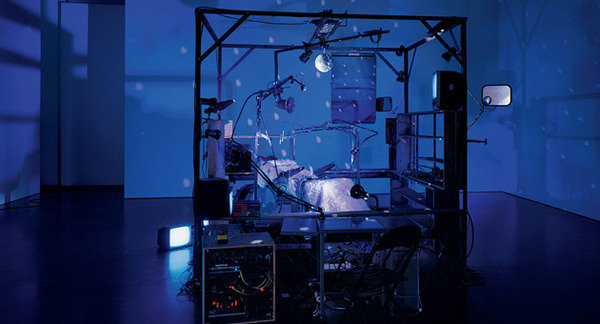 The acoustic perception of moving images in space is one of the great possibilities of video art. Yet images and sounds can also be interpreted differently and read anew, particularly through the strong impact of sounds on our emotional state. This, within the framework of rarely addressed subject matter, is the focus of the third presentation of the cooperation between Goetz Collection and Haus der Kunst.

The artists in the show approach the possibilities of video art in a wide variety of ways: In his work "Telephones" (1995), Christian Marclay combines film scenes with famous actors in such a way that they appear to be calling one other; in his both systematic and humorous montage, the different ringing sounds – those from the cradle and of the rotary dial, and the bits and pieces of conversation – sound like music. In the video "The Wind that Shakes the Barley" (2008) by Christoph Brech, the viewer thinks he hears something, although all he sees is gravestones surrounded by grass. Silence as a lack of stimuli triggers sound memories in the viewer.

In Wolfgang Tillmans's minimalistic video "Lights (Body)" (2000–02) the atmosphere of a club night in the 1980s or 1990s is evoked by the disco lighting and the song "Don't be Light" by Air. The dual meaning of the word "light" – as a noun or as an adjective – can thus be interpreted as the body's liberation from gravity through dance or as a reference to life’s volatility.
"Resonance and Silence" also presents works by Francis Alÿs, Hans Op de Beeck, David Claerbout, Tacita Dean, Rodney Graham, Gary Hill, Teresa Hubbard & Alexander Birchler, Tim Lee, Nira Pereg, Anri Sala, and Guido van der Werve.

The exhibition presents eight works by the Canadian artist duo Janet Cardiff and George Bures Miller, who, by combining image and tone and replicated spaces, activate as many of the viewer's senses as possible to make the depicted events as real as possible. In their works, Cardiff and Miller generate mental images that allow whole stories to emerge that each person can experience individually. Direct communication via headphones, such as "Did you turn off the oven before we left?" in "The Paradise Institute", or camera work shot from the actor's perspective, enable the viewer to feel the portrayed events almost physically.

In the video installation "Hill Climbing", a 45-second loop, a hike over a snowy hill is shot from the perspective of the hiker, who falls at the end. Via headphones, the visitor hears the hiker’s breathing and a dog’s barking; this evokes memories of individual experiences and generates a greater awareness of the body as an organism. The artist duo’s eight installations from the Goetz Collection merge reality and fiction and disclose the illusionist apparatus of the media.