Soviet Art and Architecture 1915-1935. Selected works of the early avant-garde, such as those of El Lissitzky, Gustav Klutsis, Liubov Popova, Alexander Rodchenko or Vladimir Tatlin, show the artists' intense preoccupation from 1915 onwards with questions of form, space and texture. The shots of urban buildings of the photographer Richard Pare, lead the viewer back to the present. 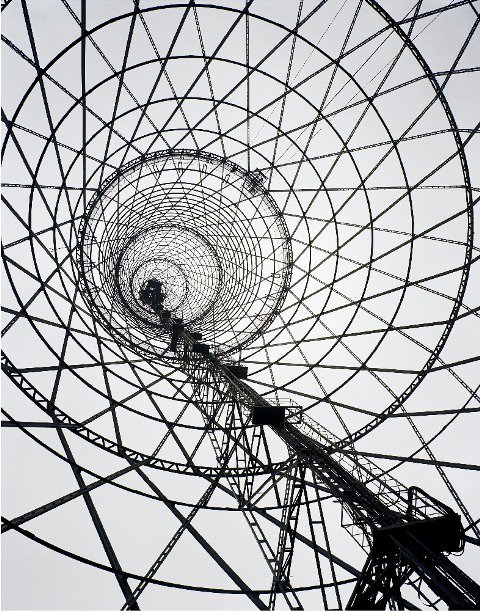 curated by Maria Tsantsanoglou, David Sarkisyan and Hercules Papaioannou, with the collaboration of Richard Pare

The Exhibition “Architects of Revolution” sheds light on an area of the Soviet avant-garde that has remained relatively unknown in Europe and beyond: architecture. Even in Russia and the other successor states of the former Soviet Union the names of most of the architects have been largely forgotten. Their structures have not become part of the collective cultural memory to the extent that the “New Building” movement in the West has.

The exhibition presents this impressive chapter in the history of the avant-garde in an unusual way in that it binds together three thematic strands. Selected works of the early avant-garde, such as those of El Lissitzky, Gustav Klutsis, Liubov Popova, Alexander Rodchenko or Vladimir Tatlin, show the artists’ intense preoccupation from 1915 onwards with questions of form, space and texture. After the Revolution they were active in the various bodies concerned with the implementation of these ideals, such as the Commission for the Synthesis of Painting, Sculpture and Architecture (1919-20). It was there that the architects Nikolai Ladovskii, Vladimir Krinsky and the painter Rodchenko created the first designs for town planning and communal housing. In 1919 Tatlin produced his famous design for a “Monument to the Third International” – a complex engineering structure with moving spaces. Although never built, its visionary potential, and dynamic formal language influenced the later architecture of Constructivism. Whereas the impressive pictures and drawings of the Costakis Collection in Thessaloniki make clear what a role was played by architectural themes in the early artistic designs, vintage prints from the Shchusev State Museum of Architecture in Moscow give an idea of the unleashing of architectural energies which took place a few years later. The historical photographs show that the new structures embodied a new age, not only in a typological sense, but in terms of scale. They towered above the old urban buildings and acted as a torch signalling the coming industrialization and transformation of the country. The photographs of the renowned British architectural photographer, Richard Pare, on the other hand, lead the viewer back to the present. Pare had begun to rediscover this lost avant-garde in 1993. In the course of several trips to Moscow and St. Petersburg, as well as to the former Soviet republics, he documented what remained of the buildings. His shots bring out their beauty and the inventiveness of their creators while at the same time tracing the course of their decay. In that sense they draw a picture of a post-Soviet society that is unaware of its extraordinary heritage.

What was new about this architecture was not only the formal idiom, but also the tasks it was supposed to perform. With the building of the new society workers’ clubs, trade union houses, communal apartments, sanatoria for the workers, state-owned department stores, party and administrative buildings, as well as power stations and industrial plants to modernize the country.

The first important structure to be erected after the Revolution was Vladimir Shukhov’s Shabolovka Radio Tower, built in the years 1919-22 and consisting of six hyperboloids mounted on top of one another. At 150 metres it was the tallest tower in the world of its kind at the time. Its elegant filigree structure became a symbol of how all that was old and ponderous could be surmounted. Rodchenko’s well-known photos of the radio tower – today seen as icons of avant-garde photography – stress the dynamics from above and below. Pare’s shots of the tower focus more on details, thus emphasizing the construction techniques of the time.

The achievements of Russian engineers like Shukhov, with their novel technical designs, influenced the development of an architecture that used clear, geometrical forms that were in keeping with its functions. In the course of the 1920s there arose two clearly defined tendencies in architecture: Rationalism and Constructivism. In 1923 representatives of the first founded the Association of New Architects (ASNOVA), whose leading light was Ladovskii. Among the Constructivists Alexander Vesnin and Moisei Ginzburg played major roles. In 1925 the Constructivist architects of Moscow joined together to form the Society of Contemporary Architects (OSA). There were also other tendencies as well as outstanding individualists, such as Konstantin Melnikov. Despite polemical squabbles among the tendencies a modern style of building had consolidated itself by the end of the 1920s.

In the course of the industrialization of the country under the first Five-Year Plan (1928-32) the building of new towns proceeded apace. This gave rise to questions concerning the concept of the city, for which various solutions were proposed, such as the “horizontal skyscrapers” for Moscow or Ladovskii’s “parabola” as the basic pattern of urban development. Quite a few of the buildings photographed by Pare were developed for communal living. The Narkomfin (People’s Commissariat for Finance) residential block built in Moscow in 1930 by Ginzburg and Ignati Milinis was one of the most experimental projects of that era. In addition to two floors of apartments it contained a communal canteen, a crèche, a gymnasium and a scullery. Other types of construction designed to promote the collectivist way of life were canteen kitchens, three of which were built in what was then Leningrad by a group associated with Iosif Meerzon and representing Rationalism. Workers’ clubs and palaces of culture offered numerous educational opportunities, symbolizing with their dynamic forms the role of the new class in the urban environment.

When in the mid-1930s the political climate in the Soviet Union underwent a fundamental change, and a monumental style of architecture based on Classical models found favour with the powers that be, this exciting chapter of avant-gardism came to an end and sank into oblivion.

Berliner Festspiele. An exhibition organized by the Royal Academy of Arts, London. In collaboration with the Martin-Gropius-Bau, Berlin, and the State Museum of Contemporary Art - Costakis Collection, Thessaloniki. With the participation of the Schusev State Museum of Architecture, Moscow. Based on an exhibition at the SMCA-Costakis collection, Thessaloniki, curated by Maria Tsantsanoglou, David Sarkisyan and Hercules Papaioannou, with the collaboration of Richard Pare.