Wilhelm Schurmann: Roadmaps to Happiness - Pictures of a street 1979-1981, a series of more than 180 original prints made by hand. The picture series Medebach 2009-2011 by Petra Wittmar deals with the small town in the Hochsauerland where she was born: a presentation of 40 colour photographs. For 'A Look at the Collection' a selection of new acquisitions from the oeuvre of August Sander (1876-1964) 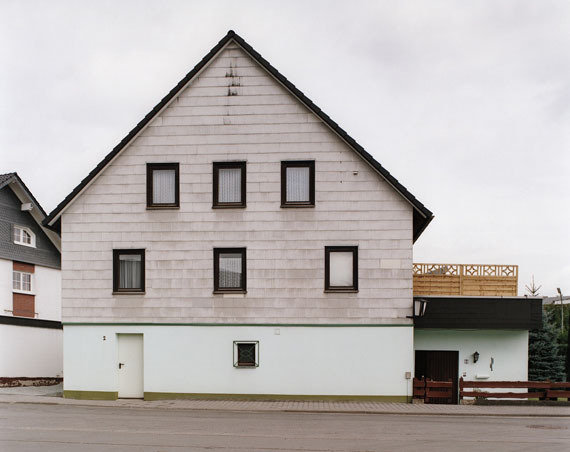 Wilhelm Schürmann
Roadmaps to Happiness - Pictures of a street 1979-1981

Wilhelm Schürmann (b. 1946) now an internationally acknowledged collector and curator of contemporary art, spent his childhood and youth in the Steinhammerstrasse in Dortmund, Germany. Between 1979 and 1981 he returned to this familiar place numerous times, capturing it in over two thousand black-and-white negatives in a very straightforward way, yet at the same time full of enthusiasm for the everyday life he encountered there, which had hardly changed over time. He enlarged what he considered to be the most important motifs and assembled them into a series of more than 180 original prints made by hand: different views of the street, the façades of typical houses and apartment buildings, neighborhoods, businesses of all kinds, from the dry cleaner’s to the hairdresser’s—from the inside and the outside, apartments, furniture, furnishing details such as stereo equipment, plants, and decorative still lifes; furthermore, portraits of the residents he met, and in a broader radius gardens, flowerbeds and back courtyards, a train compound and adjacent wasteland.

In this series of photographs, Schürmann describes not only his early personal living environment, but above all furnishes remarkable images from a time in which the repercussions of the postwar period in Germany were far more apparent, the illusions associated with the Wirtschaftswunder were blanketed by a phase of disillusionment, but in which a personal lifestyle prevailed in which people had set themselves up almost in the truest sense of the word—a climate that ultimately had a determining influence on the life of the following generations, be it due to a conformist or a critical stance.
Schürmann’s gaze endorses photography as a highly effective means of analyzing reality, as does it provide a descriptive narrative of personal and collective views and memories. In utmost concentration, with humor and self-irony, Wilhelm Schürmann in effect shows living conditions as well as an unforgotten attitude toward life. A “roadmap to happiness,” a brochure for a lottery sales point peeking out of a pants pocket, becomes a symbol of the quest for new perspectives. This is just one of the numerous marvelously observed moments in life.

In 2007, Wilhelm Schürmann endowed the Photographische Sammlung/SK Stiftung Kultur, Cologne, with the complete group of works, which consists of ca. 180 vintage prints and ca. 2,000 negatives. The comprehensive presentation of the series in Die Photographische Sammlung/SK Stiftung Kultur will comprise a selection of vintage prints as well as modern prints authorized by the artist, which will underline his current view of the works taken over thirty years ago. It will be accompanied by an extensive catalogue with a text by Gabriele Conrath-Scholl, which will be published by the Hatje Cantz Verlag.

The Kunststiftung NRW generously supported the exhibition and the publication.

With the presentation of the group of works Die Photographische Sammlung/SK Stiftung Kultur again takes an opportunity to review and safeguard a body of photographs which is of great value to the German history of photography. It is integrated into the collection alongside further well-known examples of documentary photography represented extensively by Bernd and Hilla Becher, Boris Becker, Joachim Brohm, Ruth Hallensleben, Horst Lang, Gabriele and Helmut Nothhelfer, Albert Renger-Patzsch, Tata Ronkholz, Petra Wittmar and not least August Sander, whose comprehensive archive extending over a wide range of themes forms the basis of the institution’s work.

The picture series Medebach 2009–2011 by Petra Wittmar deals with the small town in the Hochsauerland where she was born and will be shown in a presentation of ca. 40 colour photographs.

What the photographer has produced is a multifaceted, multilayered panorama that is in no way atypical of numerous small towns and settlements scattered among Germany’s large urban catchment centers. The photographs reveal the widespread competition with circumstances in metropolitan areas as well as the unbroken attraction of heaven and earth, vast fields, meadows, and vegetational diversity. While nature is never uninterrupted—it is often dissected by roads, buildings, or functional structures—in many cases it is associated with the expression of a striking timelessness and has a poetic dimension.

It is precisely this coexistence of different processes and energies that are brought home to us in what is apparently a simple portrait of a stretch of landscape, be it in the buildings it presents or the natural circumstances, that makes it so fascinating to view the photographs in all their detail. On the one hand, the specific features and influences at the intersection between the urban and the rural are revealed in a very drastic and contrasting way, yet on the other they are often so unnoticeable that their cause or singularity can only be fathomed gradually. While the photographs are clearly structured, they raise numerous and complex questions about the history, present, and future of the situations we encounter in them.

This work is a resumption of the Medebach 1979–1983 project, which was presented for the first time in 2007 at Die Photographische Sammlung/SK Stiftung Kultur in Cologne. A major share of these photographs is part of the institution’s permanent collection.

While in the early black-and-white pictures of Medebach the photographer was concerned with creating an unsentimental, unadorned image of the town, the current photographs are evidence of an even greater distance, perhaps a greater degree of purism. In contrast to the previous series, Wittmar avoids views into the immediate private sphere of Medebach residents; the entire body of works is borne by a relatively constant, homogenous distance to the subject matter. “Home” or where one was once at home apparently no longer comprises an obvious reference. Petra Wittmar’s pictorial interest is now focused on the town with its individual characteristics and its natural juxtaposition of buildings, contrasting styles, and material from different periods; of the deliberate and the coincidental, and the extensive regional surroundings.

When asked what prompted her to re-examine Medebach after three decades, Petra Wittmar replied: “I was curious to learn how my attitude toward the subject had changed and how that is reflected in the images. A further and ultimately decisive consideration was that the subject of the ‘provincial environment’ plays only a minor role in German photography, and I would therefore not be treading thoroughly scouted territory. In short: it also seemed realistically justified to me to again turn my attention to Medebach.”

Petra Wittmar studied between 1977 und 1983 at the Universität Essen GHS/Folkwang. Apart from the Medebach project, her freelance photographic work focuses on the landscape shaped by urbanization and industry and the elements and constellations encountered on the periphery of areas of high population density. It is in particular in the Ruhr region in Germany that she observes apparently ordinary urban development, industrial sites, and fallow land, which, upon closer examination, supply a variety of motifs. She produces these works alongside projects she pursues with her longtime companion and fellow photographer Ulrich Deimel. One of the focuses of their collaborative work is European architecture of the 1920s, which they have been dealing with since 1996.

The exhibition Petra Wittmar: Medebach 2009–2011 is being accompanied by a bilingual publication (Steidl Verlag Göttingen) including a conversation between Petra Wittmar and Gabriele Conrath-Scholl. The Kunststiftung NRW generously supported the publication.

A Look at the Collection
August Sander: New Arrivals

In the two smaller exhibition rooms Die Photographische Sammlung/SK Stiftung Kultur is presenting a selection of new acquisitions from the oeuvre of August Sander (1876–1964). Over the years, these could be purchased using in-house funding as well as with the kind support of the Sparkasse KölnBonn and the Gesellschaft zur Förderung der Photographischen Sammlung der SK Stiftung Kultur, Köln e.V. The presentation also comprises permanent loans and generous donations.
For example, several important photographs could be secured for the collection from the project People of the 20th Century. Among these is a portrait of Dettmar Heinrich Sarnetzki made in 1926, which Sander included in his publication Face of Our Time as early as 1929. Another portrait from 1953 as well as a close-up of Sarnetzski’s hands mounted by Sander on a sample of the author’s handwriting testifies to their decades-long friendship and the appreciation they had for one another.
That the photographs from the People of the 20th Century series were often originally commissioned works is evidenced by prints mounted on studio cardboard, complete with frame, and sold to Sander’s clients. These include, for example, a portrait of Lina and Hedwig Scharfenstein bought from the family, of which Sander produced a new enlargement and incorporated into the project as Proletariermutter (Working-Class Mother).
Photographs acquired from family-owned collections represent an important source for the reconstruction of the genesis of individual images. With the aid of those depicted or their descendents, it is often possible to secure previously unknown photographs for August Sander’s oeuvre or establish family ties. Thus, portraits of various provenances also form thematic groups within the exhibition. Family and individual portraits, frequently stemming from different periods, reflect the photographer’s activity in the Westerwald.
Alongside the portrait, the subject of landscape belongs to the photographer’s basic repertoire, as shown by works from his early creative phase. In the first decade of the 20th century, besides photography, in his studio in Linz on the River Danube August Sander devoted himself even more extensively to painting, as illustrated, for instance, by two photographs taken at the same time, one of him in his studio and another of him at an easel. Besides fine prints, which connect painting and photography, such as the gum print of a Westerwald landscape, Sander also used photography as a source for his paintings and drawings. This is indicated by a nearly identical view of Hallstatt in both a photograph as well as in a pastel.
The exhibition features both known and unknown works and provides insight into the constantly expanding collection of Die Photographische Sammlung/SK Stiftung Kultur, which was established twenty years ago with the acquisition of the extensive August Sander Archive. Light will be thrown in particular on various aspects of collecting in connection with the inventory of Die Photographische Sammlung/SK Stiftung Kultur.