The exhibition surveys the enormous impact that television has had upon contemporary culture through a range of artistic engagement with the medium and offers a look at how the next generation are responding to digital convergence. The group show includes many important works that reveal the power and influence of television broadcasting on politics and society. 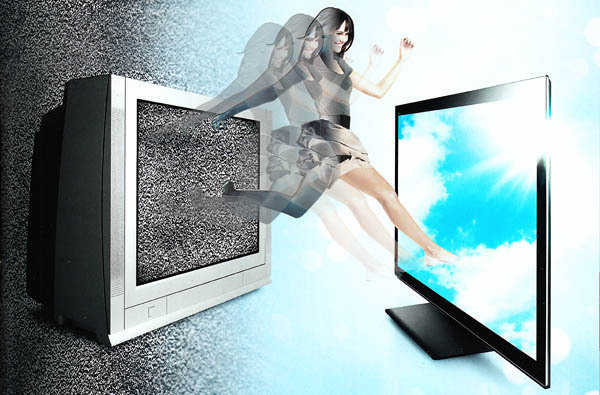 Remote Control surveys the enormous impact that television has had upon contemporary culture through a range of artistic engagement with the medium and offers a look at how the next generation are responding to digital convergence. The exhibition includes many important works that reveal the power and influence of television broadcasting on politics and society. Remote Control coincides with the digital switchover in the UK and marks the end of analogue broadcasting, representing a milestone in the evolution of the medium.

The exhibition maps the continued influence and diverse potential of TV as a social tool and new art form. In the upper galleries the works challenge the themes of politics, propaganda and identity. Adrian Piper’s charged video installation Cornered (1988) confronts issues of racial identity whilst Harun Ferocki’s Videograms (1992) features edited TV footage of the Romanian revolution of December 1989 and the occupation of Bucharest’s television station. Richard Hamilton’s Kent State (1970) uses photographs of a news broadcast of a series of anti-Vietnam protests. Fredericke Pezold challenges notions of female identity with Mundwerk (1974-75), a work consisting of 21 gelatin silver prints of photographs of her own body captured in video stills.

Remote Control also looks at television as a physical object as can be seen in Matias Faldbakken’s minimal tombstone-like concrete casts of televisions (2011) and Tauba Auerbach’s hypnotic images of TV static and digital binary code (2012). Julia Wachtel’s A.K.A. (1992) combines hard-edge abstraction and daytime television, juxtaposing silkscreened images of faces on the afternoon talk shows with monochrome panels. Concern with fame, pop culture and consumerism dominate in the work of Jessica Diamond, Mark Leckey and Martha Rosler. Diamond’s wall painting T.V. Telepathy (1989) proclaims in bold black letters “Eat Sugar Spend Money” and takes the outline of a television screen whilst Leckey weaves pop imagery such as Felix the Cat into his film collages, particularly symbolic as it was used in the 1920s as a test pattern for the first television broadcasts in the USA.

In the lower gallery the exhibition will feature rarely seen archive footage, a new installation design by Berlin-based artist Simon Denny which structures remnants of London's analogue broadcasting hardware alongside works made for TV by artists such as David Hall, Richard Serra and Ant Farm (an American artist collective). Serra’s Television Delivers People (1973) was a bold statement against the medium as was Ant Farm’s polemical work Media Burn.

As the analogue form of television becomes obsolete, Remote Control will simultaneously unveil a ruin whilst gesturing towards the future with a live programme entitled Television Delivers People. Participants and content include Auto Italia South East, Bob Stanley, exerts from Experimental TV Center selected by Stephen Sutcliffe, Jonny Woo, and Lucky PDF on the opening night.

The exhibition is the first of a brand new programme of major themed exhibitions at the ICA tackling Sound, Drawing and Sculpture over the next 12 to 18 months.

Image: Simon Denny, Those who don't change will be switched off, 2012. Digital collage from transmission switchover advertising