In the Still Epiphany

Artist Gedi Sibony is creating a large-scale, temporary work of art comprised of approximately forty objects from the collection of Emily and Joseph Pulitzer, Jr.- including works by Pierre Bonnard, Edouard Vuillard, Pablo Picasso, Henri Matisse, Paul Klee, Lucio Fontana... Sibony arranges these predominately figurative works within the spaces of Tadao Ando's building to create a flow of experience that is involving, meditative, and surprising. 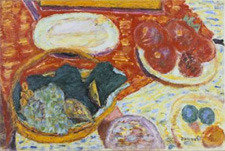 In celebration of its 10th-anniversary year, The Pulitzer Foundation for the Arts presents the exhibition In the Still Epiphany, on view from April 5 to October 27, 2012. Artist Gedi Sibony is creating a large-scale, temporary work of art comprised of approximately forty objects from the collection of Emily and Joseph Pulitzer, Jr.—including works by John Singer Sargent, Pierre Bonnard, Edouard Vuillard, Pablo Picasso, Henri Matisse, Paul Klee, Lucia Moholy, and Lucio Fontana.

Sibony is arranging these predominately figurative works within the spaces of Tadao Ando’s building to create a flow of experience that is involving, meditative, and surprising. Modern and contemporary European and American paintings, sculptures, and works on paper—many of them chosen for their depiction of domestic interiors and the figures that inhabit them—are combined with African, Asian, and Pre-Columbian ritual and decorative objects. These groupings resonate within the galleries of the Pulitzer building to impart a distinct character to each space and to offer the visitor a journey through the activity of life as depicted in the frozen moments captured by the works themselves.

In the Still Epiphany bookends the Pulitzer’s first exhibition, presented in 2001-2002, which also drew exclusively from the collection of Emily and Joseph Pulitzer, Jr. Sibony’s installation not only includes works of art from the private collection but also those given by Mr. and Mrs. Joseph Pulitzer, Jr. to the Harvard Art Museums, Saint Louis Art Museum, and the Mildred Lane Kemper Art Museum at Washington University in St. Louis.

The exhibition will be accompanied by a catalogue with essays by Sibony, the Pulitzer’s Director Kristina Van Dyke, and writer and curator emerita Marjorie B. Cohn.

"We are thrilled to be presenting In the Still Epiphany. Gedi Sibony has remarkable sensitivity to space and light and is extraordinarily attuned to his surroundings," said Emily Rauh Pulitzer, Founder of The Pulitzer Foundation for the Arts and Chair of the Board of Trustees. "In keeping with our mission to be not only a viewing place for art but also a place where ideas, programs and discussions about art, architecture and culture are cultivated, this will be an exhibition of the unexpected, a new way of looking at and encountering art, as seen through the eyes of one of the leading artists of our time."

"It is an honor to have been invited by the Pulitzer to select works that I find so powerful and personally relevant. Traveling through the foundation and all the rooms and storage spaces that house the collection I began to extract—from the special and unique vision of the Pulitzers—a show that is as much a result of the works of art as it is of the idiosyncratic and poignant decisions of the collectors,” said Gedi Sibony. “What comes out of this particular selection is a human journey, a transition from the world of people into the spaces of the hearth, towards the more imagined infinite, depicted in these works and their combinations, and situated in a building that was itself designed as a breathing entity.”

In the Still Epiphany unfolds in stages, beginning in the small space of the Pulitzer’s Entrance Gallery, which functions like a crowded foyer with a high density of portraits and busts including Vuillard’s Self Portrait (1892) and Auguste Rodin’s Bust of Joseph Pulitzer (1907). Then Picasso’s The Fireplace (1916-17) draws the visitor into the large Main Gallery, where different types of conversations between the works take place. Objects, arranged as a mise-en-scène, includes Chinese terracotta vessels from the 6th century CE, an Alberto Giacometti sculpture, and a group of Pre-Columbian objects including tribal pots and a headdress ornament made of copper and gold. Nearby are Bonnard’s vibrant, almost electric, painting Still Life with Ham (1940), as well as Matisse’s The Conservatory (1938) and Vuillard’s Woman in Green (1909), both of which depict reclining women lost in thought.

A narrow passageway leads into the Cube Gallery, where Fontana’s painting Black Landscape (1966), acts as night-sky theater box in front of which an armature holding two ancient sculptures—a terracotta from Pakistan entitled Figurine of Mother-Goddess (c. 3000-2500 BCE) and a standing figure made of stone from Africa (c. 4500-7000 BCE)—serve as a formulation of the mystery of life.

Gedi Sibony
Gedi Sibony is known for subtly poetic installations that establish a resonance between objects and the space they inhabit and for his attention to the effects of light. Frequently composed of humble, everyday objects, his exhibitions crystalize through their relationships to one another and their attention to the character of a given space. His work has been exhibited widely in the U.S. and Europe, including recent solo exhibitions at the Culturgest in Lisbon, Greene Naftali Gallery in New York, Gladstone Gallery in Brussels, and The Contemporary Art Museum, St. Louis. Sibony’s work is currently featured in The Language of Less (Then & Now), the Museum of Contemporary Art Chicago (2011-2012), and was featured in All of this and nothing, Hammer Museum, Los Angeles (2011), Unmonumental, New Museum (2007), and the 2006 Whitney Biennial. His work is in the collections of the Carnegie Museum of Art, MCA Chicago, The Museum of Modern Art, San Francisco Museum of Modern Art, the Walker Art Center, and the Whitney Museum of American Art.