The exhibition will consist of over forty images from "Citizens of the Twentieth Century," a project that aspired to be a comprehensive inventory of the German people during the Weimar Republic, and which became the photographer's lifelong endeavor. 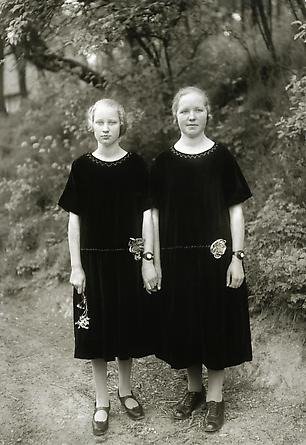 Edwynn Houk Gallery is pleased to announce our representation of the August Sander family collection. In celebration, the gallery is presenting a retrospective look at Sander’s career from the series “Citizens of the Twentieth Century.”

August Sander is widely considered to be one of the leading photographers of the twentieth century, and a master of modern photographic portraiture. He is most celebrated for his iconic “Citizens of the Twentieth Century,” a project that aspired to be a comprehensive inventory of the German people during the Weimar Republic, and which became his lifelong endeavor. Parts of it were first published in the volume “Face of Our Time” (1929). His photographs are lucid and honest portraits from every strata of that society: peasants, students, laborers, businessmen, bankers, artists, children, the disabled and the unemployed. Each finds his or her proper place within the seven portfolios into which Sander arranged his “Citizens of the Twentieth Century:” The Farmer, The Skilled Tradesman, The Woman, Classes and Professions, The Artist, The City and The Last People. The project remains a moving celebration of the diversity of national life, yet for the Nazis it was far too rich and various, and it refused to conform to their narrow Aryan ideals: in 1934 they confiscated all the copies of Sander’s books and prints that they could find, and banned him from continuing to take portraits.

Sander remained a firm exponent of the universal language of photography as an uncensored communicator of truth and reality. A photograph, he believed, should be free of any manipulation or trickery and should serve as a true document. As he once put it, “nothing seemed to me more important than to project an image of our time with absolute fidelity to nature by means of photography.” His portraits beautifully demonstrate his meticulous sense of observation, his eye for the surrounding environment, for occupation and social class. Dress and posture and backdrop all do the work of revealing identity. For Sander, the inner essence of a human being could always be read from their outward appearance. His direct - but by no means detached - style of portraiture has been a major influence on photographers ever since, including Paul Strand, Richard Avedon, Irving Penn, Walker Evans, and Diane Arbus.

The exhibition will consist of over forty images from “Citizens of the Twentieth Century,” including some of the most famous, such as “Three Farmers” and “Pastry Chef,” and the less seen images of persecuted Jews. Rare enlargement prints are also on view. This exhibition follows Houk Gallery’s “Diane Arbus /August Sander” exhibition last fall at the Zurich gallery.