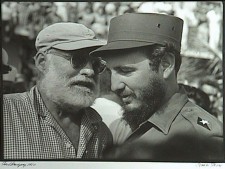 Specializing in art from the Caribbean basin, the Pan American Art Gallery features avante garde and contemporary Cuban works, as well as contemporary and folk art from Haiti and Jamaica.

Born in Santiago de Cuba at the end of the 19th Century, Joaquin Blez began working as a photojournalist for El Figaro, a weekly, illustrated magazine in Havana. He traveled to Europe and settled in Milan in the early 20s where he studied at the School of Applied Chemistry and Physics of Photography. These studies inspired his experimentation in technique and effects that came to mark his works which were printed from glass plates. In the 1920s he had established himself as an accomplished portrait photographer of the wealthy class in Havana and earned a gold medal in 1923 for his shots in El Mundo newspaper. He participated in the first National Salon of Photography in Havana, the International Photography Exposition in Berlin and was selected to show in the Cuban Pavilion in the New York International Fair in 1938. He also had numerous shows throughout the U.S., Europe and Cuba in the 1940s. He is most famous for his nude photographs, which came to represent the art deco movement and Belle Epoch in Cuba.

From 1959 to 1961 Corrales was one of the chosen photographers to accompany Fidel Castro. Before this he worked as a photojournalist. His most recognized works are images from the birth of the Cuban Revolution. He then moved on to capture images of post-revolutionary daily life in the Cuban countryside. He received an award from the Cuban Museum of Fine Arts in 1996. There are several books published on his work. He currently lives in Cohimar where he used to photograph Hemingway.

Alberto Diaz, known as Korda, got his start as a fashion photographer and he became one of the most important photographers in Epic Revolutionary Photography. His most famous work is a portrait of Che Guevara known as Heroic Soldier, an image recognized across the world as a symbol of the Cuban Revolution. He has had exhibits around the world, including the U.S. and has received several awards and distinctions.

Osvaldo Salas began his studies at a young age at the San Alejandro Academy which he left to take his family to the United States. He became member of the Imwood Camera and photography club in New York in 1947 where he began by shooting baptisms and weddings and ultimately opened a studio in Madison Square Garden. By the 1950s he was an established photographer having photographed the likes of Dali, Joe Di Maggio and Rocky Marciano. In 1955 he met Fidel Castro and returned to Cuba in 59 to follow Fidel in his trips and document the Revolution as photojournalist for the periodicals Gramma and RevoluciÃ³n publications. In this facet he found himself drawn to images of the landscape of the revolution and portraits of its important figures. His portraits capture in an instant the depth of the personality of his models as he brings them to life.

Roberto Salas started working in photography at fifteen, following in the footsteps of his famous father, Osvaldo Salas. He initially worked as a photojournalist in New York and returned to Cuba at the age of 19 to, in his words, make photography, before I only took pictures. In the early 60s, he worked on the Cuban Epic Photos, the images published in the Cuban newspapers following the steps of the revolution. He even set up camp in the national palace to capture Fidel and Che at work in their first steps. He had his first personal show in 1963, Tumba, BembÃ©, BatÃ¡ and since then has had over 50 personal shows in Cuba and abroad including the United States, Latin America, Mongolia, Vietnam and Cambodia. His recent work focuses on the human body and he chooses to work with black models to step out of the typically white focus in black and white portraiture to capture the Caribbean essence.

Born in Havana, Marta Maria and her husband, also a well-known contemporary Cuban painter, currently reside in Monterrey, Mexico. She was granted artist residency in Oregon, Maine and Ohio. She has had several personal shows in many European countries, South America and the U.S. and her work can be found in many public permanent collections. Photographs Do Not Bend in Dallas hosted a show of her work in 1997. She is the most important and internationally recognized contemporary Cuban photographer. The subject matter of her work always includes parts of her body and reflects emotional and psychological aspects of the artist.

Jose Manuel Fors was born in Havana and graduated from the San Alejandro Academy of Art. He is part of the 1980s generation of artists who rediscovered photography as a means of aesthetic expression beyond the photojournalism of the previous periods. His work focuses on photo mosaics with a repetitive theme focused primarily on elements from nature. His subject matter incorporates human elements, concepts of memory, and the way that our environment affects us culturally. He has had personal exhibitions in Cuba, Europe, the U.S. and Japan since 1991.

Currently living in Havana, RenÃ© PeÃ±a has gained world acclaim (one of his pieces is in the permanent collection of the Museum of Fine Arts Houston). He has had several personal shows since 1991 in Cuba, Spain, and the United States. He has also participated in over 40 collective shows. In 2000 he won the first prize at the 4th Biennial of Caribbean art held in Santo Domingo with his series White Things. His work focuses on the use of self portrait and details of his body as a symbol of transformation and cultural identity.

Born in Havana, Juan Carlos Alom began his involvement in photography with studies at the International Institute of Journalism and he has been exhibiting since 1991. His works have been displayed in Cuba and the U.S. One of his photographs, Solo tu Cabes en la palma de mi mano was illustrated in Time Magazine's Issue of the 100 best photos of 2000. Several of his pieces were also exhibited at the L.A. County Museums display of Cuban photography in July of 2001. His work is indicative of the change in Cuban photography in the early 1990s, a turn towards using the subject to reflect upon inner turmoil through ritualized icons and distortion of the subject matter. Alom is currently working in film in addition to still photography and has produced several short films, which have been shown in New York and Cuba.

Hernandez is a graduate of the San Alejandro Academy of Art and works as a professor of lithography. He has been exhibiting since 1992 in Cuba and Europe and received the first place in lithography in the 3rd Salon of Fine Arts in 1985. His photo collages incorporate images of primarily the male nude with materials such as glass and metal. His most recent work, the series Fragile Bodies, utilizes these different materials to represent the dichotomy of strength and fragility in the subject.

Cirenaica Moreira finds her roots in theater and turns the camera on herself to create an image of a narrative, a story. She uses her experience in theater to stage the scenes of her photography. She has been exhibiting since 1992 and her works can be found in collections in the U.S., Latin America and Europe. She is also published in several journals and books including Art Cuba: the New Generation.