The exhibition explores aspects of innovation and the national identity in Lithuanian architecture of the Soviet period, and questions the role of architects in the totalitarian system and their relationship with political authority. It also looks at sources of information, influences and where the architects found their inspiration. 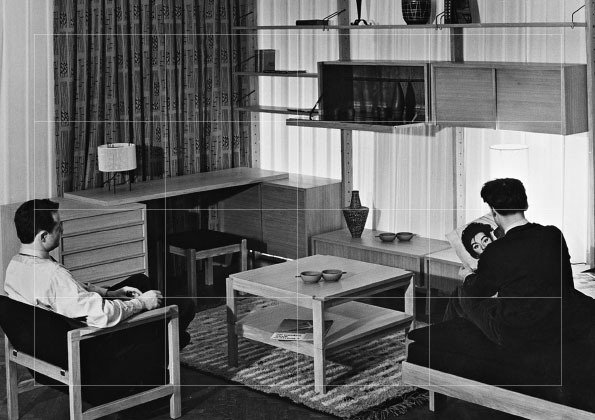 Possible Modernism explores the limits of modern Lithuanian architecture of the Soviet period. The word ‘possible’ in the project’s title denotes questioning, as a principle for open and critical research, authorisation, since state commissioned, approved and run design practice is analysed, and power, since what is in focus is architecture, determined by the political climate.

The research focuses on the most prominent Lithuanian architects of the first post-Second World War generation, Vytautas Bredikis, Nijole Buciute, Vytautas Edmundas Cekanauskas, Algimantas Maciulis, Algimantas and Vytautas Nasvytis, and Justinas Seibokas, as well as the context of their work. The start of their professional careers coincided with the beginning of the Khrushchev ‘thaw’ in cultural politics, and a rather unique situation in the field of architecture. The natural course of prewar Modernism at the time was forcibly discontinued, while the stylistics of Stalinist Neo-Historicism in architecture was suddenly at odds with the shifting aims of the system. Architects were in great demand during the postwar period of rapid urbanisation, and also due to the fact that many professionals had fled the country at the end of the war. These circumstances opened up opportunities for younger architects who were eager to innovate, to design public buildings that would stand out against the background of the typical mass-built social housing. The work by the architects mentioned had a major influence on the development of Lithuanian architecture in the second half of the 20th century, and in particular on shaping the identity of national institutions of art and culture. Theatres, exhibition halls, palaces of culture, like the Art Exhibition Palace (now the CAC), the National Opera and Ballet Theatre and the National Drama Theatre, to name just a few, that were built during the Soviet period and are still functioning today, came to represent not only the highest achievements by their designers, but also distinctive forms of modern culture.

The exhibition explores aspects of innovation and the national identity in Lithuanian architecture of the Soviet period, and questions the role of architects in the totalitarian system and their relationship with political authority. It also looks at sources of information, influences and where the architects found their inspiration.

Both the whole context of architecture and the practice of individual architects are seen as multifold phenomena, fusing the real and the fictional, inside and outside, image and space, aesthetics and ideology.

Image: display of experimental furniture designed by Algimantas and Vytautas Nasvytis at international exhibition in Moscow „Art of Domesticity“, 1961, photograph from the archive of A. and V. Nasvytis