The exhibition 'A MacGuffin and Some Other Things' is a mix of video, sculptural installations and performance to investigate the role of the object, and its function in relation to a script. The experimental Grotto series continues with an installation by David Fagan entitled 'Sensation'. 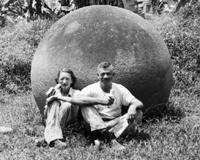 A MacGuffin and Some Other Things

Our next exhibition the group show A MacGuffin and Some Other Things uses a mix of video, sculptural installations and performance to investigate the role of the object, and its function, or consequence, in relation to a script.

The gallery will be split horizontally to create two viewing levels, a forced division between the films, performed work and sculptural objects. Like a ‘MacGuffin’, in our story the physical divide becomes the object around which the show orbits but whose intrinsic role is not at its core.

In addition to events within the gallery, the IFI is delighted to present in collaboration with Project Arts Centre five special screenings of Claffey’s curatorial film-work This is Going to Take More Than One Night. Directed by Neasa Hardiman, the film features work by Isabel Nolan, Bea MacMahon, Alice Rekab and Sarah Pierce. The work also addresses the place of the object within the script or performance. One of the starting devices was a form of ‘exquisite corpse’ - each artist ‘left’ something for the next to incorporate into their section of the production. These free screenings will take place on April 17, and 19 - 22 inclusive, at 13.10 each day.

Coinciding with the exhibition A MacGuffin and Some Other Things, Project Arts Centre continues its new experimental Grotto series, with an installation by David Fagan entitled Sensation.

Engaging with the idea of the cabinet as a less salubrious, low-rent space, Fagan re-imagines it as prime real estate for a ‘dirty work’ – an object that is aesthetically pleasing and display-ready, but that is also somewhat under-thought or conceptually slippery in its origin.

In this way, Fagan poses the question: ‘how and where does one display such things?’

Throughout the year further emerging artists will be selected to exhibit in the Grotto. They will be given carte blanche in order to conceptualise and transform this space which is located adjacent to the work of the main exhibition space and program.

Image: courtesy of the Peabody Museum of Archaeology and Ethnology, Harvard University, ID # 2004.24.30015

You are welcome to join us for the opening of A MacGuffin and Some Other Things and Sensation on Thursday 12 April 2012 from 6pm to 8pm.