A Proposition by Michael Lin. The exhibition is an experiment in composite creative work, combining a variety of mediums including painting, sculpture, installation, music, film and performance. With the collaborative work by the artist and Japanese architect collective Atelier Bow-Wow. 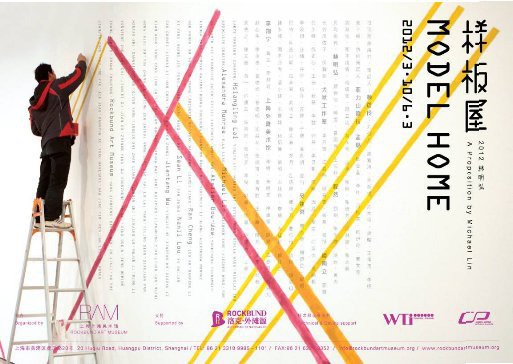 Rockbund Art Museum’s latest exhibition “Model Home – A Proposition by Michael Lin” opens on March 10, 2012. The show is a new conceptual project presented by artist Michael Lin in the way of cross-boundary collaboration. Taking the collaborative work by the artist and Japanese architect collective Atelier Bow-Wow as departure point, this exhibition invites artists, construction workers and furniture makers, as well as local musicians, photographers and urban culture researchers to contribute to and participate in the production. In so doing it is hoped that this project will echo the proposition of Bauhaus in early 20th century, which sees architecture as vehicle for a total work of art that integrates architecture, painting and sculpture. This exhibit was curated by RAM Advisory Committee member Lai Hsiangling. Alexandra Munroe, Samsung Senior Curator of Asian Art at the Guggenheim Museum, also a member of RAM Advisory Committee, acted as associate curator of this project.

The first thing visitors see on entering the exhibition space is Lin’s signature wall painting, which was inspired by the patterns on the quilt cover found in a local shop in Shanghai. The artist used the motif elements throughout the six floors of the museum, in special rhythmic and metrical patterns that imbue the historical space of RAM with a new visual feel. Michael Lin has always excelled at finding unique or culturally significant local fabric patterns and transplanting them into different contexts, thereby achieving the transformation of ordinary public “space” into culturally specific “place”. Visitors see the hidden agency of culture at work during the transformation, as well as the clashes and interactions between different cultures. Rather than being a single work on display, the wall painting serves as the exhibition’s starting point, as well as a nexus and platform that links the various parts of the exhibition into an organic whole. From preliminary work on the pattern itself, to the living spaces of the workers who painted the pattern onto the walls and the audio and visual works that evolved from the pattern, and ultimately extending to the research into urban history, all are reflected in this patterned environment, which forms the interdisciplinary, material, and integrated foundation of the exhibition as a whole.

This exhibition’s “workers’ house” was designed by Atelier Bow-Wow, an experimental architectural firm founded by Yoshiharu Tsukamoto and Momoyo Kaijima, in collaboration with Lin, to provide accommodation for the artists, painters and works in the production of the exhibition. During the installation period, this structure was placed in a narrow alley between RAM and one of the historic buildings in Rockbund area. On the opening of the exhibition, the house would be moved into the museum and become an installation work on view with all the traces of its temporary role as a worker’s dormitory. This structure reveals the wisdom and concerns that guides Atelier Bow-Wow’s research into urban life, betrays the backside of the glittering urban scene by showing the normal setting of workers’ life in a museum space. The appearance of the living space of the workers who are responsible for the construction of our glittering urban centers in the “temple” of art not only offers realistic on-site visual experience to the audience, but also represents a concrete instance of the roles Lin thinks artists should play in society.

Another important collaborator is Professor Li Xiangning from the College of Architecture and Urban Planning at Tongji University and his team of students, who are currently working on a project with Atelier Bow-Wow entitled “Made in Shanghai”. This project is investigating several dozen historic and contemporary buildings in Shanghai, from iconic governmental and cultural landmarks to unlicensed structures, and even architectural ruins, in an attempt to trace their living transformations from planning through utilization. Drawings of these building merge, intersect, and clash along a 165 meter long wall of the construction site on Huqiu road. These classic yet atypical spatial structures are refracted, filtered, and distorted to create a familiar yet distant cityscape where pedestrians can locate their own special memories, dreams, and visions of the city. This project is also incorporated into the “Workers’ Club” on the second floor of the museum as a display of several cases, and will be updated periodically so that visitors can keep up to date on the latest and most detailed research results. In the “Workers’ Club”, along with “Made in Shanghai”, visitors also find a collection of handmade furniture based on Hans Wegner’s classic designs, which feature finely crafted jointwork, and reflect the integrated nature of the exhibition that combines all parts together. During the exhibition a series of lectures and workshops will be held in the “Workers’ Club”, as well as RAM’s long running free public event series “Night @ RAM”.

Another highlight of the second floor are two screens showing videos made by artist Cheng Ran, which document over one month in the lives of the wall painters and construction workers as they prepared for the exhibition. Due to the amount of time that the artists and workers spent together and the meticulous observation and firsthand experience it entailed, these videos are no longer just simple documents; rather the camera extended into every detail of the workers lives, from their safety helmets and meals, to the clothing of workers of different ages, and the scenery they saw from inside the museum looking out. These images are displayed in the second floor gallery as well as in the museum lobby and café, creating an overlap of the space within the narrative and the space where the narrative is recounted. These moving images give the museum and the exhibition a degree of autonomy, making them the subjects of the narrative. This piece recreates lost scenes and allows visitors to better understand the creation of the exhibition, but it also comes to symbolize the complex relationship between memories, historical narrative, and space-time.

The theme music for this exhibition, “The Room in Stripes”, was created by sound artist and musician Lou Nanli, who used the patterns of the wall painting and the interior of the museum itself as a “spectrum” of musical raw materials. The thickness, color, and shape of the wall painting patterns, and the doors, structure, and volume of the museum building were transformed into a musical frequency distribution curve. As the wall painting becomes more complex moving from the first floor up to the sixth floor, the music changes from a single tone into a finished musical composition that interacts with the museum’s spaces, walls, and images. The exhibition’s opening ceremony features a live performance edition of “The Room in Stripes”, a collaboration between Lou Nanli and video artist A Jiao.

The unique core of this exhibition is the collaborations that have occurred across disciplinary boundaries and between professionals and non-professionals. This unique achievement is directly demonstrated in the variety of artworks on display, and even more so in the production of the exhibition itself. Artists, architects, university research team, construction workers, furniture craftsmen, the museum staff, and everyone else involved with the exhibit helped by giving and receiving orders, communicating and compromising, and debating and reconciling, thereby creating the dynamic environment that ultimately gave birth to this exhibition. Because of this Michael Lin suggested that the names of everyone involved with the exhibition, including security guards, housekeepers, and kitchen staff, should appear on posters and printed materials. And this in turn echoes the original guiding principle agreed on by the curators and artists: “to use this exhibition to bring people together, and promote interaction between members of society” (Michael Lin). The name “Model Home” would seem to be directly related to the innovative living space designed by Atelier Bow-Wow; but what it accomplishes, beyond being a model for interaction between artists and society, is a new experiment of Rockbund Art Museum towards its role in contemporary society.